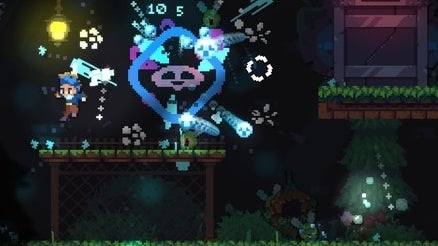 Revita is a very hard blend of roguelite and twin-stick shooter, which I am terrible at but quite enjoying. Breaking down those two terms a little, it offers procedural scrambling of enemies in amidst persistent progress – you die and die but eventually you will get somewhere – and you aim with one stick and move with another.

But it’s not top-down like a lot of twin-sticks. It’s a side-on 2D platformer, and one with a control scheme that at first took me quite a lot of getting used to. Enemies come at you quick in the game’s small arenas, so keeping your distant is crucial. Revita maps a jump and dash to the left bumper and trigger respectively, in the standard control method that it encourages you quite strongly to use. I am a slow learner with new things, and this has left me feeling a bit lop-sided. I switched to a more standard control layout briefly, but while that put jump and dash on face buttons it messed up aiming for me. So I am powering through with the standard layout as I was told to do.

There are two things I already love about this game. One is the art style, which uses chunky pixels to create a world that I am eager to explore. The main hub area so far is a train station, and the first boss I fought – I don’t think I was able to win – hangs out in a clock tower. The only thing I love more than train stations and clock towers is elevators – I am weird – and that’s how you move between levels. Revita, throw in a lighthouse and I am yours for life.

The second thing is the main hook, that revolves around exchanging your health for things. Every few levels you come across a shrine that allows you to exchange as many hearts as you want – and as you can spare – for an upgrade that will make things easier or more interesting. Maybe it’s a shield, maybe it’s a new kind of shot or a damage boost. At other times you’ll come across treasure chests that ask you to sacrifice a heart if you want to open them. Balancing this out is a system that reminds me a little of Hollow Knight: you can exchange the essence you collect from downed enemies for extra life. Okay, now I’ve typed it out that’s exactly the system from Hollow Knight. You even have the same sense of inward shuddering as you charge the exchange by holding down a button.

Revita is hard. I am nowhere in it, but I’m still plugging away. I’m still waiting for the controls to click – I’m sure they will. And I’m still riding the train and the elevators. Living, dying, trying it all over again.

Revita is a very hard blend of roguelite and twin-stick shooter, which I am terrible at but quite...

What are the best sports games on PS5? Whether...

We have a new space adventure for you: Aniquilation....

Infiltrate each space station and complete your objective...