Pokémon Violet and Scarlet Might Return to Traditional Catching Mechanics 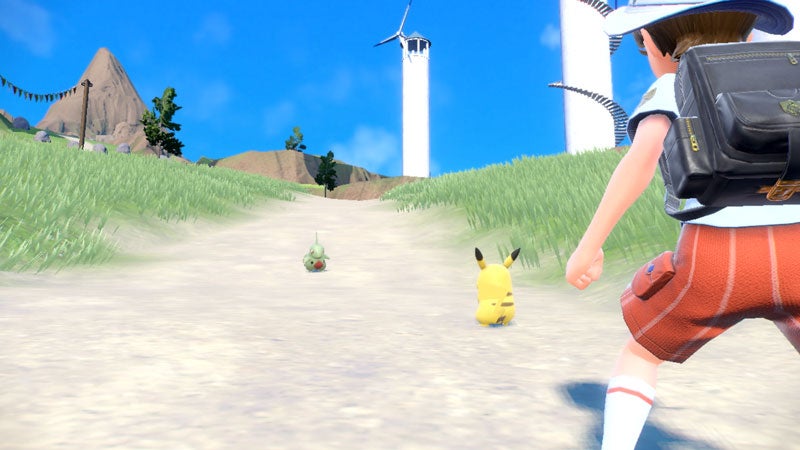 A number of Pokémon community members have honed in on some text on the official website for Pokémon Scarlet and Violet that seems to indicate “traditional catching mechanics” will return in the games – that is, not the Pokémon catching from Pokémon Legends: Arceus.

Various towns blend seamlessly into the wilderness with no borders. You’ll be able to see the Pokémon of this region in the skies, in the seas, in the forests, on the streets — all over! You’ll be able to experience the true joy of the Pokémon series — battling against wild Pokémon in order to catch them — now in an open-world game that players of any age can enjoy.​

This, combined with a screenshot of a battle with a wild Larvitar and a trainer’s Pikachu, has been interpreted by a number of Pokémon fans (many of them gathered on this Reddit thread) to mean that in Violet and Scarlet, we won’t be able to just throw PokéBalls at monster on the overworld like in Pokémon Legends: Arceus. Instead, we’ll have to enter battles and weaken them first, just like in every other main series Pokémon game up to this point (except for Let’s Go Pikachu and Eevee).

While this piece of information isn’t quite enough to say for certain one way or another how catching wild Pokémon is going to work in these games, it’s probably a safe enough assumption. For one, Pokémon Let’s Go! implemented twists on traditional Pokémon catching that haven’t been seen in a Pokémon game since, indicating they were more of an experiment than a permanent fixture.

And while Pokémon Legends: Arceus’ catching mechanics were wildly popular, including with us in our review, the game came out less than two months ago — nearly enough time for Game Freak to pivot an essential feature based on audience feedback alone.

All Confirmed Pokemon in Scarlet and Violet

Fans are divided on whether this return to basics is a good thing or not, though. While some in the thread are lamenting the possible lack of Arceus’ stealth mechanics, others are pointing out that a traditional Pokémon game is unlikely to have the same focus on catching piles and piles of the same species over and over again, making overworld capturing unnecessary. For now, though, it’s all speculation, as we don’t know much about the design of Violet and Scarlet or how catching will factor into it.

Pokémon Scarlet and Violet were announced recently on on February 27 as a part of a Pokemon Day celebratory stream. We got a look at three new starter Pokémon: Grass Cat Sprigatito, Fire Croc Fuecoco, and Water Duckling Quaxly. The games are set for release on Nintendo Switch in late 2022.

Round Up: The Reviews Are In For Sonic The Hedgehog