A-Train: All Aboard! Tourism Review

A train leaves Tokyo going 65 km/h, when will it get to Osaka? If this was your favorite math problem, boy do I have a game for you!

A-Train: All Aboard! Tourism is the latest in a largely Japan-only series of business simulation games where you are put in charge of a railway company in Japan and tasked with running a successful company. You do this not just by expanding your railroad throughout the city, but also by managing subsidiaries, playing the stock market, and as the name of the game would indicate, helping develop the city to be more attractive to tourists. Now this game would seemingly check multiple check marks for me (my title at Nintendo World Report is currently “Train Guy”), as my favorite types of games are railroad and city building simulations, but I had a hard time getting into this one. 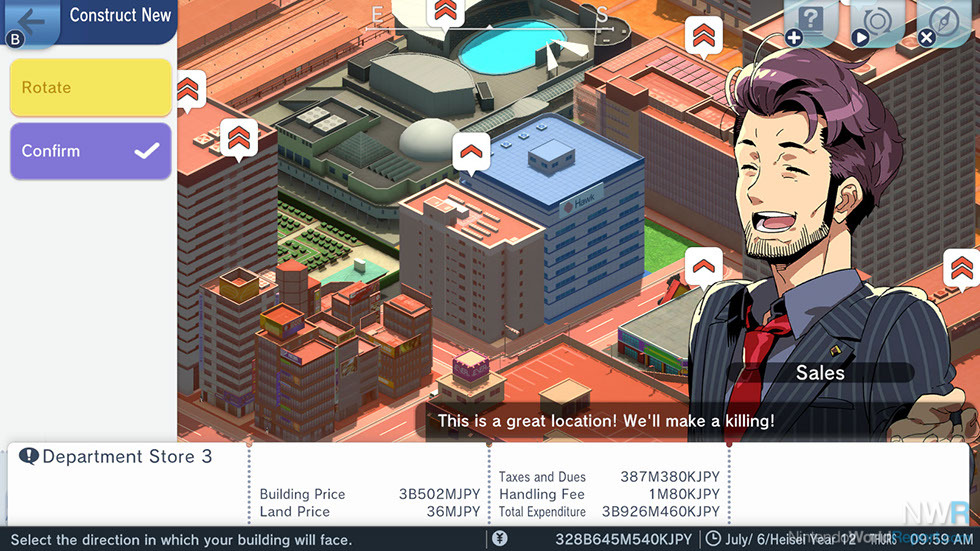 A-Train is a long-running Japanese railroad simulation series that has a hard time finding a footing in the US. It’s based on how rail lines developed in post-war Japan, in addition to a state-owned railway system. Private railways were given business opportunities and real estate along their rail lines to encourage the development of new ones. This allowed the railroads to create planned communities that would rely on their railroads and bus systems for transportation. Many of these railroads developed tourist attractions along their rail lines, with railroads owning the Tokyo Skytree, baseball teams, and even owning a stake in Tokyo Disneyland. These diversified holdings allow these private passenger railroads to be very profitable, unlike in the rest of the world

A-Train: All Aboard! Tourism uses the idea of developing the town around the railroad as its central idea, with you building subsidiaries such as amusement parks, hotels, or residential towers around your stations to create more demand for the railroad. In this iteration there are even tourist attractions that draw tourists from other cities and are often an objective to winning a scenario. Each scenario takes place in a different city, at a different time period with different objectives that can involve anything from having a certain amount of profit to growing the city to a certain size to transporting a certain amount of tourists. There are eight scenarios in the game (including two tutorial scenarios), but you can actually make your own scenarios, upload them to other players and download their scenarios. There are also three levels of difficulty: Easy, Standard, and Expert. 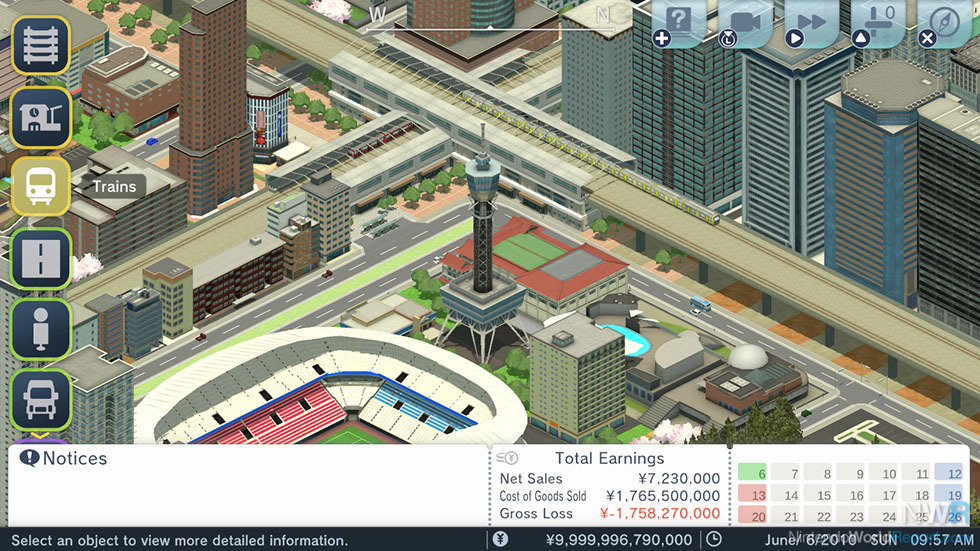 Now as a business simulation, this is a fairly complex one. You have to juggle running the railroad, running your bus system, developing real estate, buying and selling land, buying and selling stocks (not just your company either), managing subsidiaries, managing deals with the city, and selling freight to other cities. As you can see, it can be a lot. All of this sounds stressful but much of it just needs you to check back every once and a while. You access most of this info from a series of icons on the left of the screen, which bring you to more menus where you can see breakdowns of profits and such. I noticed I tended to just access those from the touch screen, but it could also be accessed by hitting the B button and then scrolling through your options. Aside from all this, the railroad and network is where you will likely spend most of your time.

Managing the railroad is the heart of any railroad sim, and this game has some interesting concepts but can make the basics of managing your train and bus fleets frustrating. A-Train, as opposed to others like Transport Tycoon or Railway Empire, uses a schedule-based system for managing the vehicles, not a signal-based system. And since this is a more commuter train style simulation, it makes a certain amount of sense. You first go through and lay out the course the vehicle will make, with buses you would just designate the bus stops you want and with trains you can tell it which way you want it to go when it approaches a switch. You then need to schedule the vehicle to depart the station at a certain time, tell it how long to wait until doing another loop, and how many loops it should do in a day. 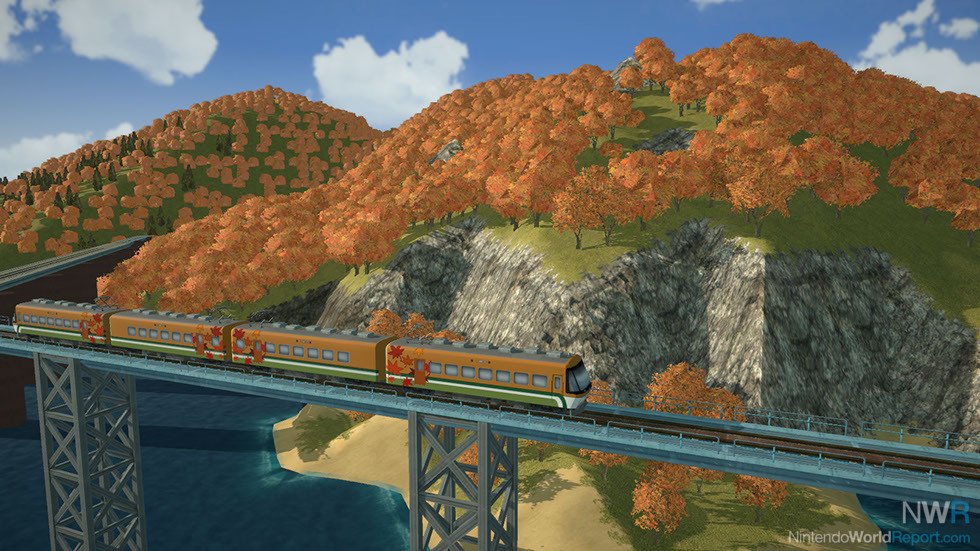 This system is fine for simple track systems but becomes very tough when trying to guess how long a train will take to make it through the whole system, especially if it encounters another train on the way. You end up having to guess at how long the loop will take and if you get it wrong, and the train could get back late and will then just wait for its next departure time, which could be hours away. And in a busy train station that means it will hold up many of your other trains.

I had a hard time adapting to this in the tutorials as the only other thing keeping the trains from running into each other (they don’t run into each other, just both stop and then you have to pick one up and drop it again, just like my model trains!), is a vague setting called “train intervals” (set it to four, the largest distance), where a train will stop a certain distance away from a stopped train. This doesn’t work all the time, especially when there is track crossover right before a station. It becomes frustrating when you have to pick up the train and drop it down somewhere else (that also costs money). If they had some kind of signal system, where I could put a signal right before the cross over, holding the train there until the other train leaves, it would be much less of a headache. This forces you to really look at the schedules to make sure the trains aren’t going to be at stations at similar times.

Graphics-wise, it’s nothing to be too impressed with, but it’s also a business sim so that’s not really where the meat of the game is. There are two camera views you can switch between: Isometric, which gives you a more traditional SimCity look at the game, and Free, which allows you to move the camera in any direction. You can also go for a ride in your train or bus, but with the graphics the way they are, it is more of a gimmick than anything else. Even with these graphics, the game crashed for me a few times, so make sure you turn the auto save on, and make sure to save after completing a big expansion. I found out the hard way my auto save wasn’t on and lost a couple hours of work.

Overall, once you get past the issues, it can be an in-depth and fun game to play for a rail simulation enthusiast, but those issues can be tough to overcome and take a lot of trial and error if you want to build more complex routes. It has a tough learning curve even with the tutorials. Some of this may just be me coming from another style of play but I actually had to restart the tutorial a couple of times until I got the hang of how the routing and scheduling system worked so I could design my tracks properly, but now that I have the hang of it, I’ll probably continue playing it.

Riot Games has been hard at work expanding the...