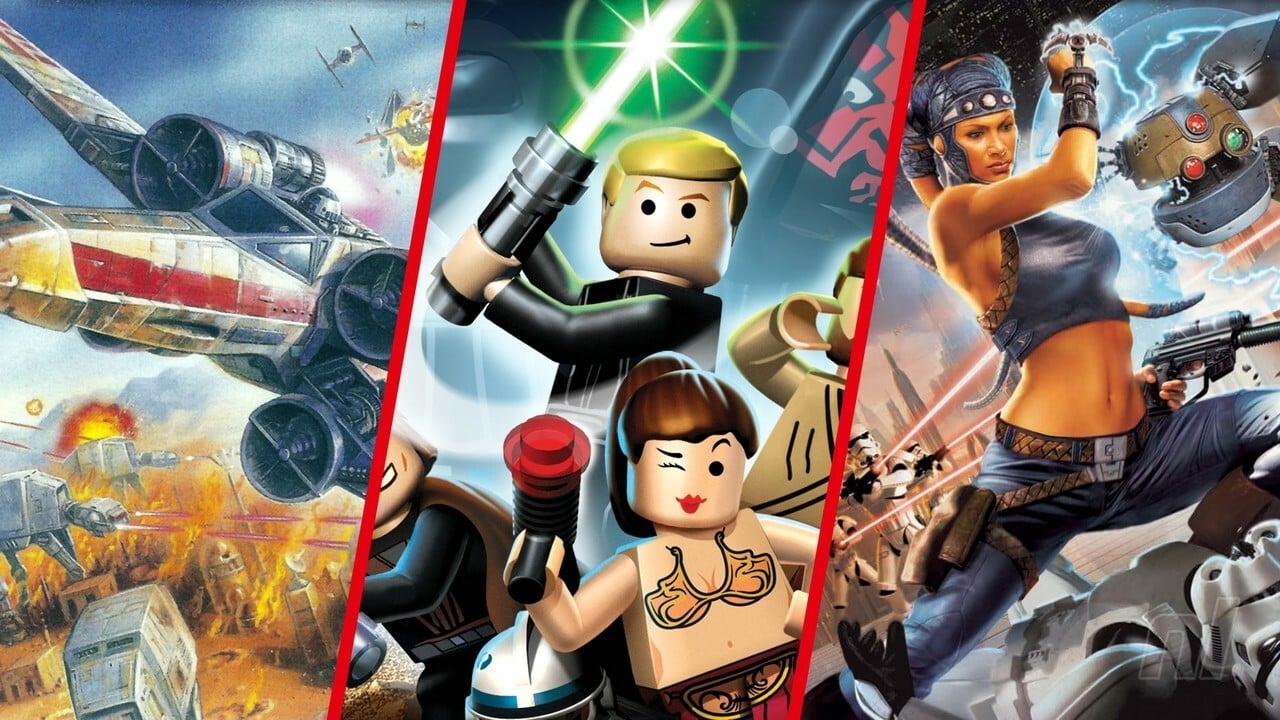 The release of Star Wars Episode IX: The Rise of Skywalker in 2019 may have ‘ended’ Star Wars as we’ve known it for the past four-and-a-half decades, but all it really did was tie a bow on the cinematic tales of the Skywalker clan and the nine-film saga which began way back in 1977. After all, Star Wars is never really gone.

Streaming platform Disney+ has all the movies in 4K, plus there are shows like The Mandalorian, The Book of Boba Fett, Obi-Wan and a deluge of other TV projects in the works, and not forgetting new trilogies, spin-offs movies, games and much more in the pipeline. Yep, that galaxy far, far away will be coming at you across all media for a long time to come.

The franchise has a long and storied history with video games, too, and below we take a look back at every Star Wars game on Nintendo systems, ranked from worst to best. To keep things tidy, in instances where the same game was released on multiple platforms, we’ve opted to mention the lesser of the two — invariably the portable version — in the other’s entry.

So, come with us on a journey to a galaxy fa—oh you know the rest. We begin at the bottom, so beware that the Force is not strong with many of these…

Anyone who’s only ever played Star Wars games on a Game Boy deserves your pity. Retro Nintendo portables had a lot of things going for them, but a high midi-chlorian count wasn’t one of them.

Flight of the Falcon is the worst Star Wars game ever because it’s got Han Solo and the Millennium Falcon on the cover — the two coolest things in the Star Wars universe — and it sullies their good names. As with all terrible Star Wars games, the iconography fools you into thinking ‘ah, it can’t be that bad!’, but our review conclusion sums this up perfectly: “Flight of the Falcon is a very bad game. As such, you should not play it. However cool the screenshots look, however promising the premise sounds, just remember that the Force is not with this one in any way, shape or form.”

You have to remember that while Yoda is a beloved character, this game came before we’d ever seen him wield a lightsaber in what is easily the best scene in Attack of the Clones. Despite the name, in Yoda Stories you control Luke Skywalker in a top-down adventure as he chops snakes in two with his laser sword. How bad can that be?…

Really quite bad, it turns out. ‘Sedate’ is too generous a word, and whole game is a technical embarrassment. It’s tempting to blame the hardware, but then you look at Link’s Awakening and see what might have been. Link’s Awakening this ain’t. Poodoo, plain and simple.

Fittingly, the weakest movie in the saga got one of the weakest Star Wars games ever. Normally we’d caveat a statement like that with ‘arguably’, but Episode II really is inescapably pants (except for that Yoda bit at the end — we remember quite liking that). The tie-in GBA game is a turgid side-scrolling beat ’em up that lacks the artistic polish even the dullest examples on this list bring to the table. Coarse, rough and irritating, indeed.

An isometric platformer that takes place between Attack of the Clones and Revenge of the Sith, you control the petulant young Skywalker in this stodgy action game. Considering the platform it’s on, the game looks and sounds okay. Beyond that, though, it’s dull, repetitive and so s-l-o-w. Anakin, you’re breaking our heart.

With passable animation and audio (especially considering the system) and boring, finicky platforming, Star Wars: Jedi Power Battles falls into a regretfully familiar pattern of portable Star Wars games. It’s not as hateful as some, and it’s a little faster paced than New Droid Army, but it’s a similar story. Perhaps developer HotGen was trying to faithfully capture the excitement of The Phantom Menace’s trade disputes, in which case job done. Some might call the non-canon blue lightsaber wielded by Mace Windu on the cover unforgivable, but we were too bored to care.

A relatively ho-hum 8-bit platformer where you play as Luke battling through variations of the locations from the movie, Star Wars: The Empire Strikes Back could not be more average. For kids desperate to play as hero Luke, it was passable filler but no more. A Game Boy version also exists, but if you’re gagging to play through the best film of the saga in video game form, you’re much better off going with the 16-bit ‘Super’ iteration. Indeed, LucasArts didn’t even bother with an 8-bit Return of the Jedi — the developer simply jumped generations and started afresh with Super Star Wars on the SNES.

Another one quick to tick the ‘dull’ and ‘repetitive’ boxes, if you think the isometric adventures on the GBA were tough going on the eyes, Obi-Wan’s Adventures takes that style of game back a console generation in an ‘adventure’ set concurrently against the events of Episode 1. It’s not awful, just ugly and entirely pedestrian.

A tie-in with the movie and TV shows surrounding the events between Episodes II and III, it was the same old story when it came to this action platformer. Uninspired, unengaging, unexciting — take your pick. At least the bad games are really bad and evoked an emotion other than disappointment. Republic Heroes is just painfully, crushingly average.

We’re off to dig out our thesaurus because we’re running out of words for ‘unremarkable’, and we think there are several more to come before we get to the good stuff.

Another platformer. To be fair, it did a decent job of providing some variety and touching on the main characters and locations of the movie, but it’s pretty unmemorable (and unforgiving). The token Game Boy version upped the difficulty as it reduced screen real estate, but possibly the most interesting of the 8-bit versions is the entirely different and earlier Famicom game developed by Namco in 1987. ‘Interesting’ because it’s not afraid of deviating significantly from the source material and having Darth Vader turn into a scorpion, Not ‘interesting’ because it’s any good, sadly.

A Ubisoft side-scroller, Star Wars Trilogy: Apprentice of the Force sure looked impressive. It used the same engine as the console’s port of Prince of Persia: Sands of Time, with smooth animation and 3D-style character models. Giving players the chance to relive the original trilogy anew, bland gameplay was once again its undoing. Totally vanilla, utterly underwhelming, but could’ve been worse.

Previous articleFinal Fantasy 16: Square Enix Shows Off New Characters and
Next articleEven with the power of 25 RTX 3080 GPUs, this

The release of Star Wars Episode IX: The Rise of Skywalker in 2019 may have 'ended' Star Wars...
News

Square Enix has profiled two key characters from Final Fantasy 16, and shown off the game's world of...

Is this the tropical getaway you need to avoid...

Will time travel and a return to random encounters...

The game is out now on PC. Watch more trailers...

The US Army announced last week that Microsoft won...

Cat Cafe Manager is a store simulator in which...

Ten years ago, I helped co-found Day of the...