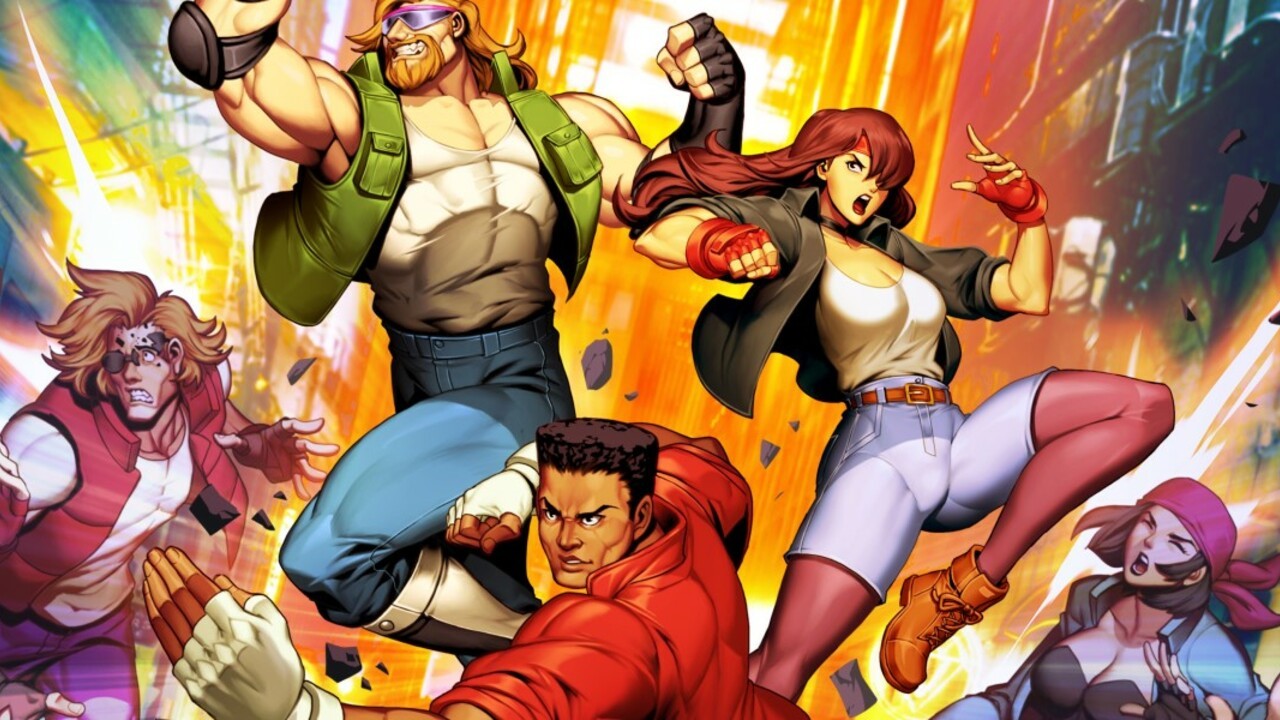 Do you wake up each morning with a desire to beat the living hell out of street-roaming criminals? Don’t do it, we implore you. Prison isn’t worth it. While Final Fight and Streets of Rage may have been the violent video games that made you the addict to barbarism that you are today, take heart in the knowledge that your longing for combo-driven, body-piling antics hasn’t been totally forgotten.

Final Vendetta, from the UK’s Bitmap Bureau (Xeno Crisis) draws influence for its assault and battery from almost every scrolling beat-em-up ever made, cherry-picking the good stuff and reworking it into a whole new chapter of sidewalk vigilantism.

A phone rings, someone answers, someone’s been kidnapped. Sound familiar? Mike Haggar knows these plot points well. From there you have a choice of three characters: Miller, an overpowered wrestler-type; Claire, a nimble female who whips out punches at the detriment of slightly less clout; and Duke, a bad dude straight from the ’80s who cuts an even middle ground between the three.

Final Vendetta isn’t related to Konami’s Crime Fighters or its 1991 sequel, Vendetta (also known as Crime Fighters 2), despite some distinct similarities. While graphically attractive, it doesn’t capitalise much on current-gen hardware, wanting to appear as close to a ’90s gaming aesthetic as possible. At a glance, it’s similar-looking to 1993’s Zero Team (also on Switch, courtesy of Hamster) but with next-level, Neo Geo-grade animation. While there’s a danger that the added frames may foster imprecision, Bitmap Bureau has engaged the action in such a way that it remains taut, snappy and accurate.

There are some neat boss entrances, a car destruction bonus round, and some pretty backgrounds, with stage five’s club being a standout. But, if you hail from the UK, one can’t help but feel slightly let down by the lack of Anglo-centric detailing. Considering the game is set in London, we were hoping for more of the city’s defining visual hallmarks: drunken louts, broken escalators and betting shops full of old men. Yes, there’s a pub background with a dartboard; a train resembling the London Underground (specifically its wall maps and yellow-on-black Way Out signage) and Tower Bridge turns up as set dressing – although for some reason, it looks like a hails from 1913. Yet, apart from the red telephone booths that you get to gloriously pummel for point-related treasures, the game mostly feels US-based, and the gangs you encounter – with their colourful Marty McFly puffer vests and snowboard shades – don’t help the dissonance any.

This is a minor complaint, though. What’s important is that Final Vendetta plays really well, featuring carefully implemented elements from past games. All characters have a breakout move that can be enacted with no health loss as long as you allow your super bar to reach its peak: exactly the same format as found in Streets of Rage 3. Additionally, various tandem button presses allow you to back-attack and blast out heavy-duty special moves ad-infinitum.

Each character has a variation of double-tap special attacks that, combined with the super button, can be used to chain hits. Duke is especially good at this, as he can move from a dash into a flash kick, sending punks skyward for a spot of juggling. All characters have the Streets of Rage 3 dodge and grab repertoire, too, allowing you to get hold of an enemy and either fling them behind you, crack them one (quite literally with Miller’s backbreaker) or vault over them to turn them into a concrete pancake.

You can block, flying kick, kick-bounce, dodge, down-drop attack, and even kick floored enemies in the gut – a satisfying feature that recalls Konami’s aforementioned Vendetta. It’s an incredibly broad repertoire that borders on almost too much, but with practice can be applied in a smart, calculated assembly. And it feels great, too, to mix up with purpose; to throw a couple of knees to the gut and then hold forward to kick a dude across the screen before launching a fiery super into a nearing crowd.

The enemies are nicely balanced, your usual motley crew of big guys, small guys, swift girls, and those who dangerously windmill-kick on wake-up. Only two issues stand out with the combat negotiations. Firstly, with the basic standing-punch combo, you have to actually suspend your inputs momentarily to engage your double-tap moves; and secondly, despite twenty-four preset input configurations, none of them let you assign shoulder buttons. The latter has been done very much on purpose, however, since Bitmap Bureau wants you to master the game in the manner it intended.

The music is a solid mash-up of techno, breakbeats and funky jazz-inspired loops. The sound of Utah Saints, the ’90s dance act that helped with the game’s scoring, will be familiar to anyone that knows their work, and it’s a nice bonus to have them featured. The audio isn’t on the level of Streets of Rage, but it’s certainly in the same ballpark.

Final Vendetta’s crucial, opinion-dividing aspect, will be in the way its difficulty is arranged. Only Easy or Hard modes are initially available, but there are no continues for either. We completely respect a single-credit challenge, and applaud Bitmap Bureau for designing it this way; at the same time, not everyone will have the discipline required to topple it. One aspect that plays into this, is that, at only six stages, its longevity is expanded by the fact that if you don’t repeatedly attempt to clear it, you won’t be seeing the ending. The challenge has been beautifully constructed around this, and seeing as we cleared the game for the review, far from impossible.

You do take quite a hefty amount of damage from enemies, and it’s easy to get quickly ganged up on. These factors make getting through it with no continues genuine work, even on Easy, and it’s common to drop lives early on until you have a feel for your character’s advantages and approach each juncture pragmatically. It’s nicely structured, however, in that it requires more dedicated learning and on-the-fly skill than Streets of Rage, but is no way near as punishing as Final Fight. Instead, it sits somewhere in-between. It’s enjoyable to learn each section, the different types of threats, and figure out the best way to deal out licks without absorbing any in return. This is aided by various weaponry, including knives, swords, and a cricket bat with a good swing and tons of range.

A patch to fix a game-killing glitch is definitely on the cards, one we encountered twice while entering a boss fight. The letterboxing that introduces the scene failed to disappear, all health bars vanished, and half the buttons stopped responding entirely.

The biggest criticism, while being undeniably slick, is perhaps the lack of originality. There are a few traps to deal with later on – stuff that needs to be memorised lest you get swatted or squashed – but on the whole, one can’t help but feel there’s more that can be done with the genre. While its broad move-set is a plus, the lack of creativity elsewhere is a tad disappointing. It plays great, and a lot of thought has gone into its mechanics, but the backstreet, the train, the elevator, the wharf, the nightclub and the henchman’s manor are hardly unique, nor imbued with much in the way of invention.

Previous articleAssassin’s Creed Valhalla adds Altaïr’s armour for free
Next articleSingleplayer Battlefield game announced in the modern style: with a

Japan's legendary giant monster can't avoid being put into a number of video games, as the Nerd takes...
PC

Captured on Nintendo Switch (Handheld/Undocked)Do you wake up each morning with a desire to beat the living hell...
News

Destruction, overkill, and invisible walls! Watch our review to...

The rumor mill is in overdrive right now. Whether...

We take a closer look at the true goals...

Logitech has some of the best gaming mouse options...

PSVR comfortably achieved the illusion of “presence”, despite its...