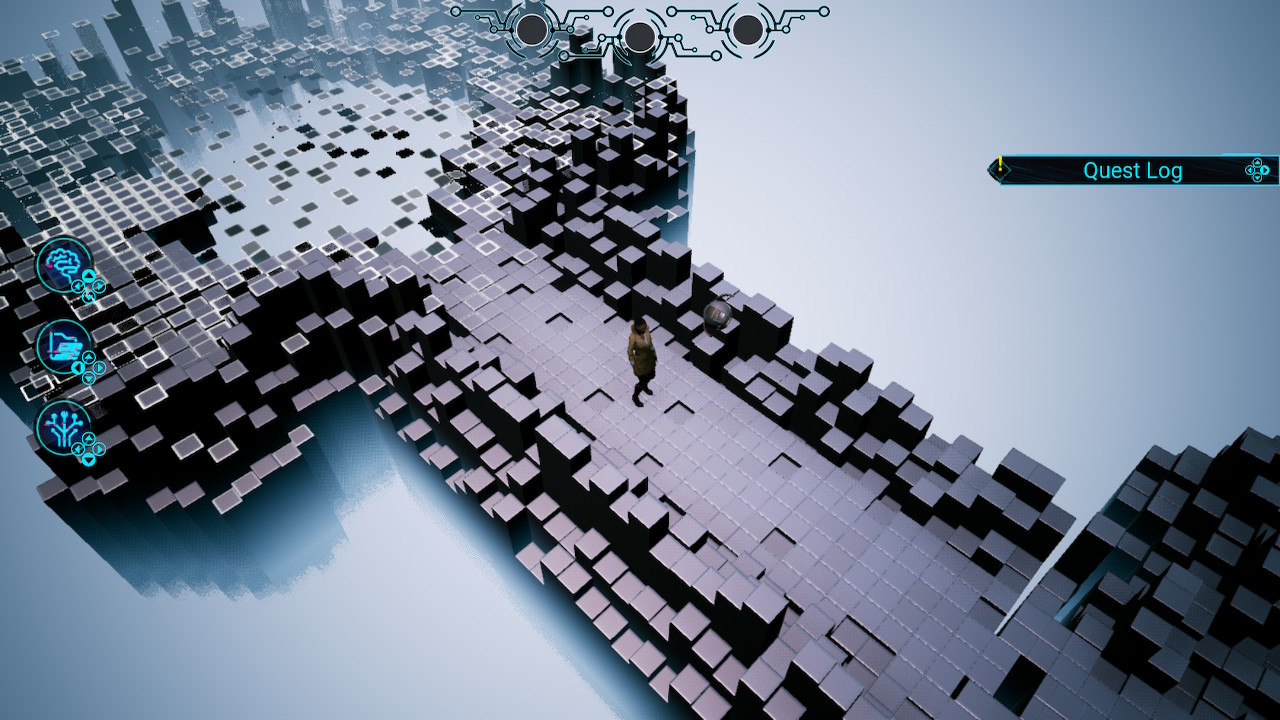 Virtual reality threatens to be the next big thing in computing as we leave our ugly bags of mostly water behind to realize our dreams and desires in a fully virtual world freed from any restraint.

Stories set in worlds in which such virtual reality exists lend themselves easily to noir, because once you start mixing the impulses of human beings and take away the consequences of the real world, things can get very dark, very quickly. You’re not really killing a person or stealing a car, so…go ahead? 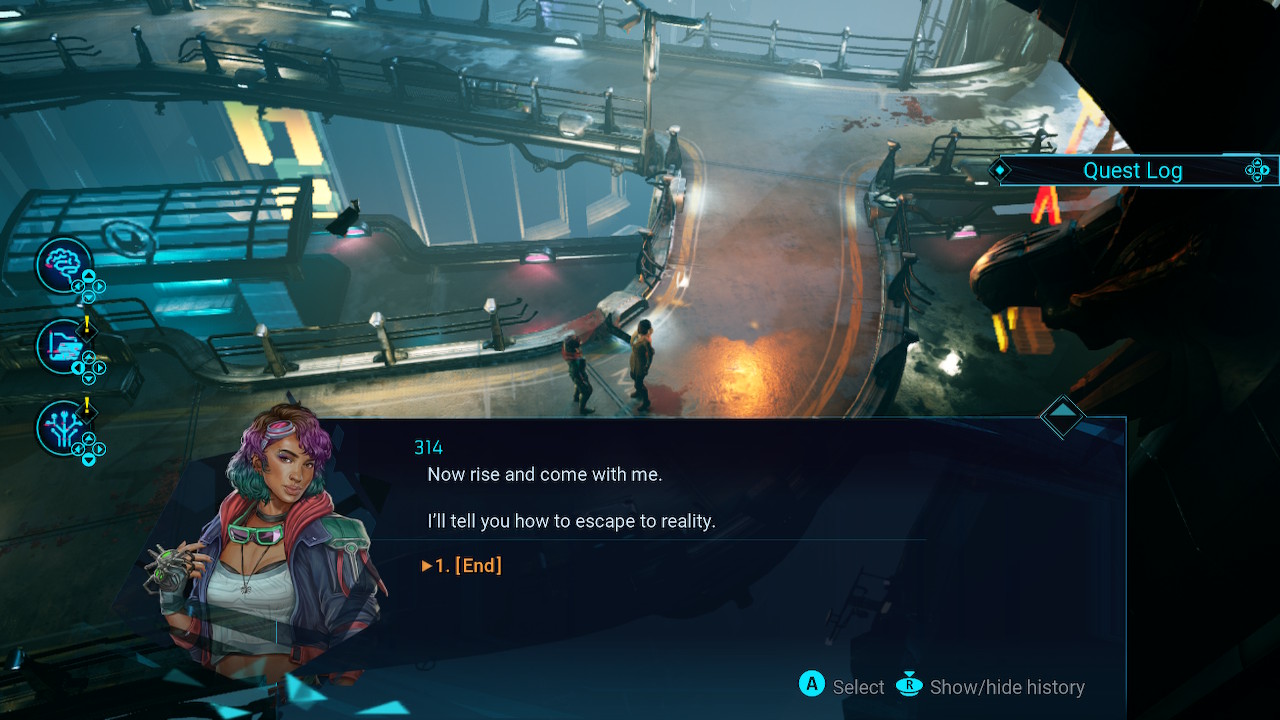 But as the adage of “delete my browser history when I die” shows us, what we want and what we want people to know about us are two very different things. And in the world of GameDec, you play a character whose job it is to uncover dirty laundry and clean it up, or maybe throw it in an incinerator, never to be seen again.

GameDec (short for Game Detective) is a dialogue-driven point-and-click adventure. Set in a dystopian world where the very rich live in impossibly tall skyscrapers while the poor eke out a living in the poisonous depths, you make a living by discreetly investigating crimes, mysteries, and transgressions in the vast sea of alternate realities most humans retreat to. 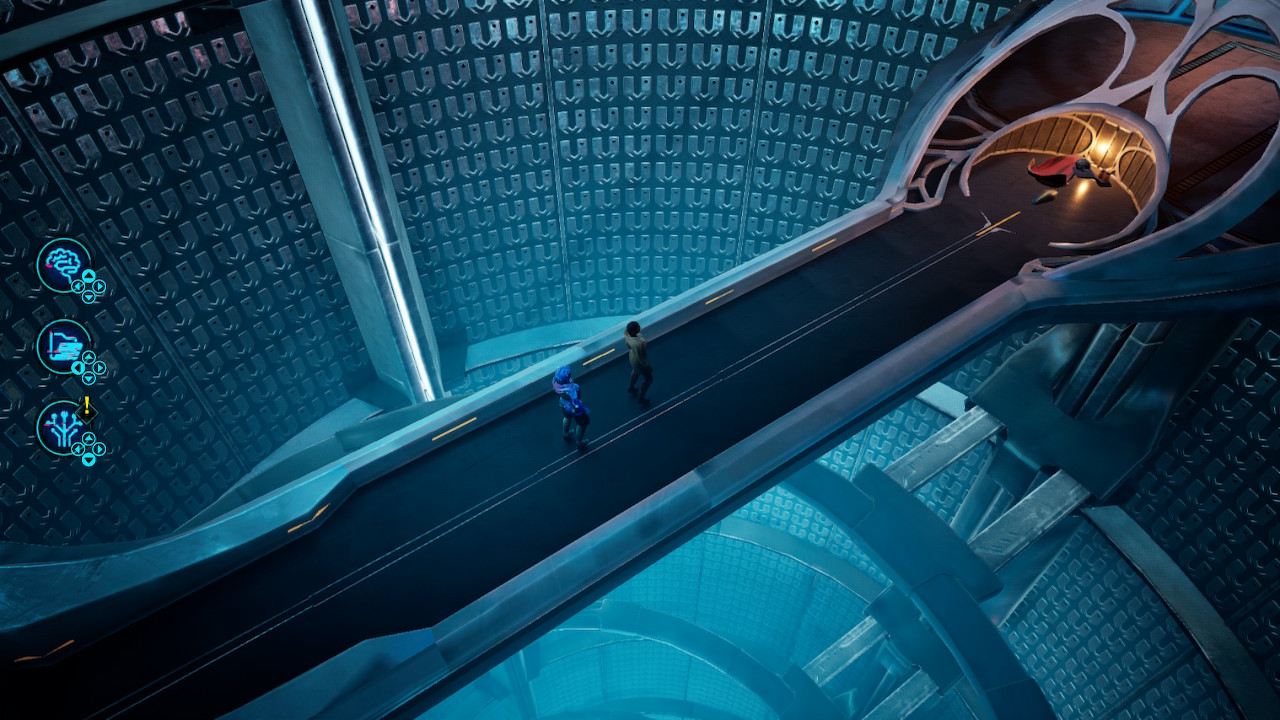 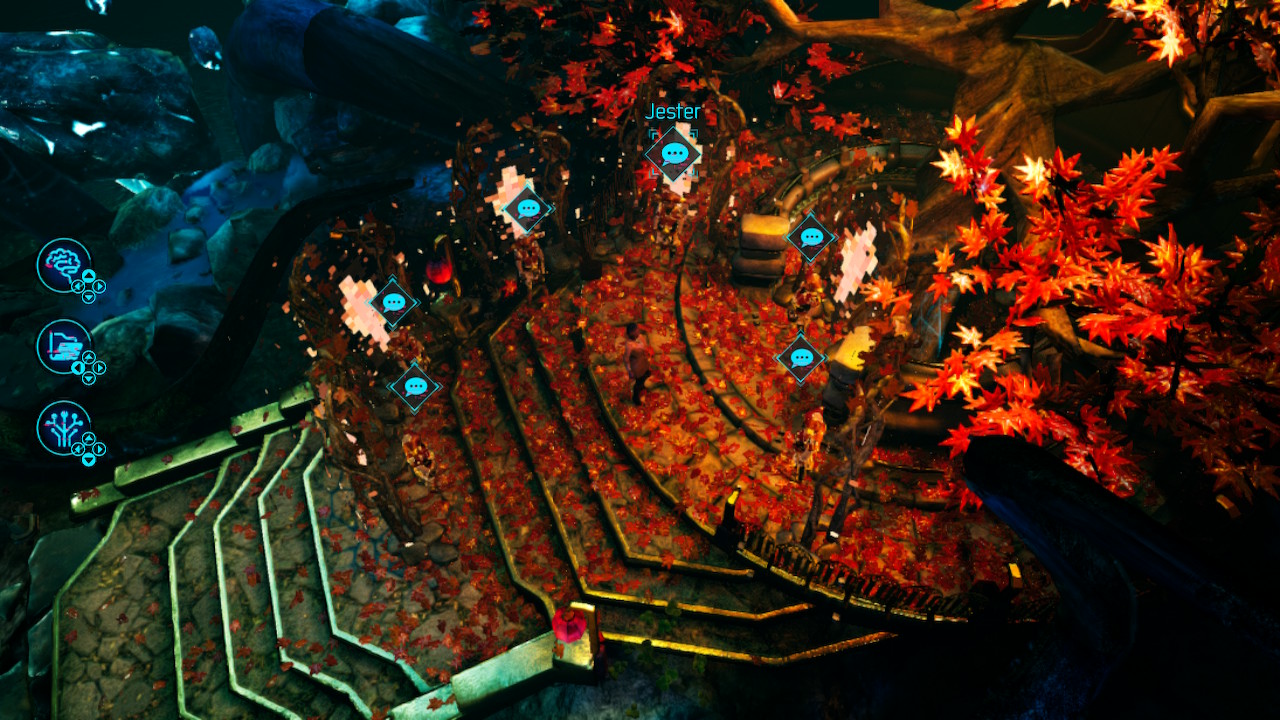 I won’t go too much into the details of the game because it is, after all, a mystery, How you choose to investigate it is as much a part of the game as discovering what happens.

Played in a top-down isometric style, your GameDec will wander both the highs and the lows of the city, armed only with his skills—and in this game, skills are your most essential tools. As I say, the game is primarily dialogue-driven. As you interrogate people, what dialogue options you choose don’t just advance the plot, they also determine how your personality develops in the experience system. Aggressive and confident stances give you “red” experience points, while doubtful or empathic responses give you “green” XP. Along with yellow and blue XP, you build up these points to invest them in skills/careers that can unlock new dialogue options or resolve conflicts, leading to new information on the case. 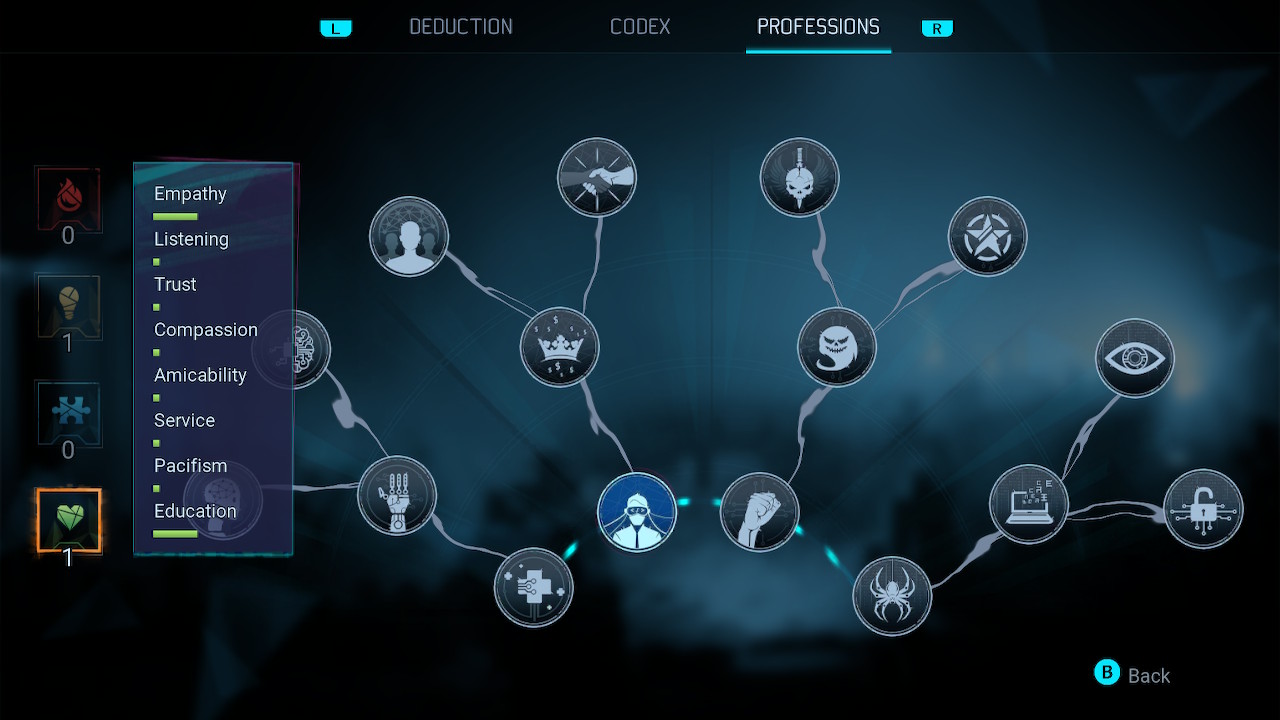 For example, you can build up your hacking skills that will allow you to interact with the virtual environment in helpful ways. You can boost your savvy and popularity to use your social media presence to convince people to give you what you want. Real-world doctor skills can help you diagnose motives and analyze corpses, or maybe your character can call on their street skills to bully their way through the mob.

Beyond your dialogue choices, your actions have a practical effect on the game. Vandalizing posters might get you street cred. Digging through garbage cans might reveal a clue, or they might stink you up so badly no one wants to deal with you. But act and speak carefully because not everyone wants to spend all day with you; some characters will cut you off if you waste their time, and while you’re questioning a witness, the criminal might be making an escape. 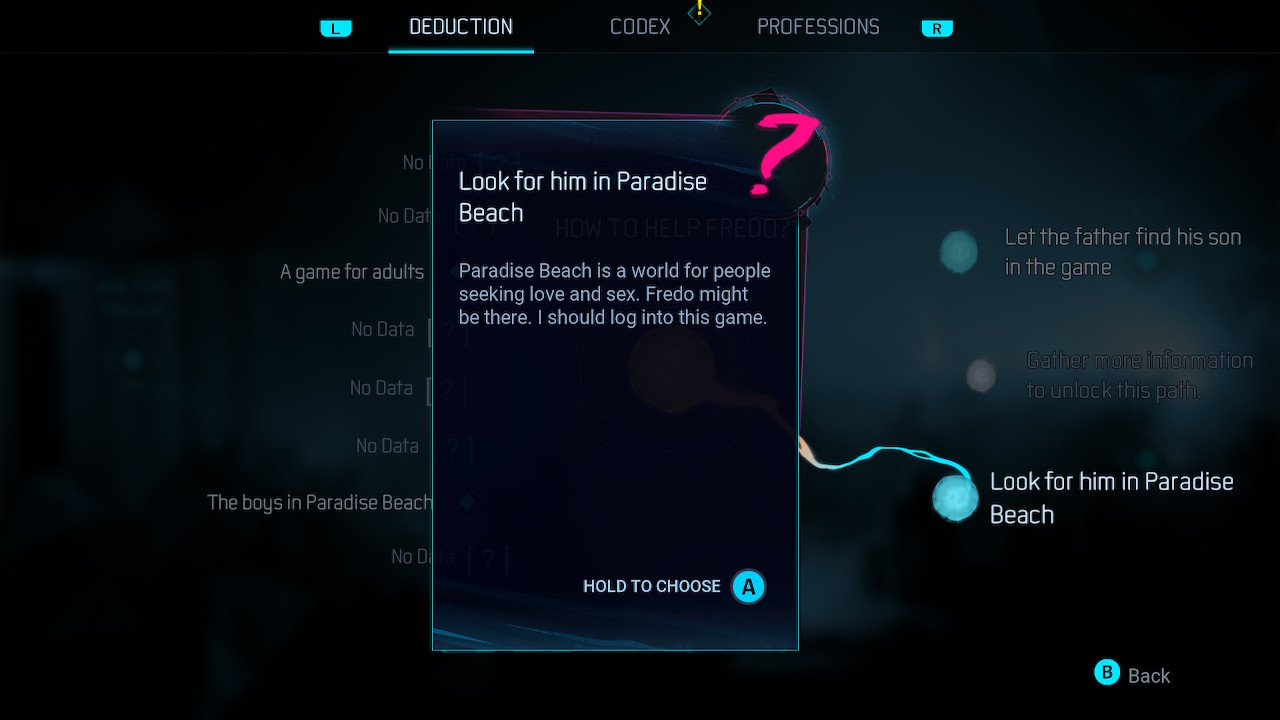 The other aspect of the game is the deduction system. Each section of the game has a mystery, and each mystery is made up of several questions: what really happened, why was X killed, how was X murdered, etc. Those questions are presented on a timeline with several possible answers, but the answers are only revealed by the process of your investigation. Fail to find a clue or ask the right question and you’ll be locked out of certain solutions. It doesn’t break the game (you can always proceed), but you might get a wrong or incomplete solution.

There are a few problems with the interface. GameDec uses one stick for movement and another for object/NPC selection. You’ll often end up selecting the wrong thing if you’re not careful, and in one very infuriating moment, I was unable to speak to a vital character because I simply could not get the game to highlight the right person despite trying for several minutes. 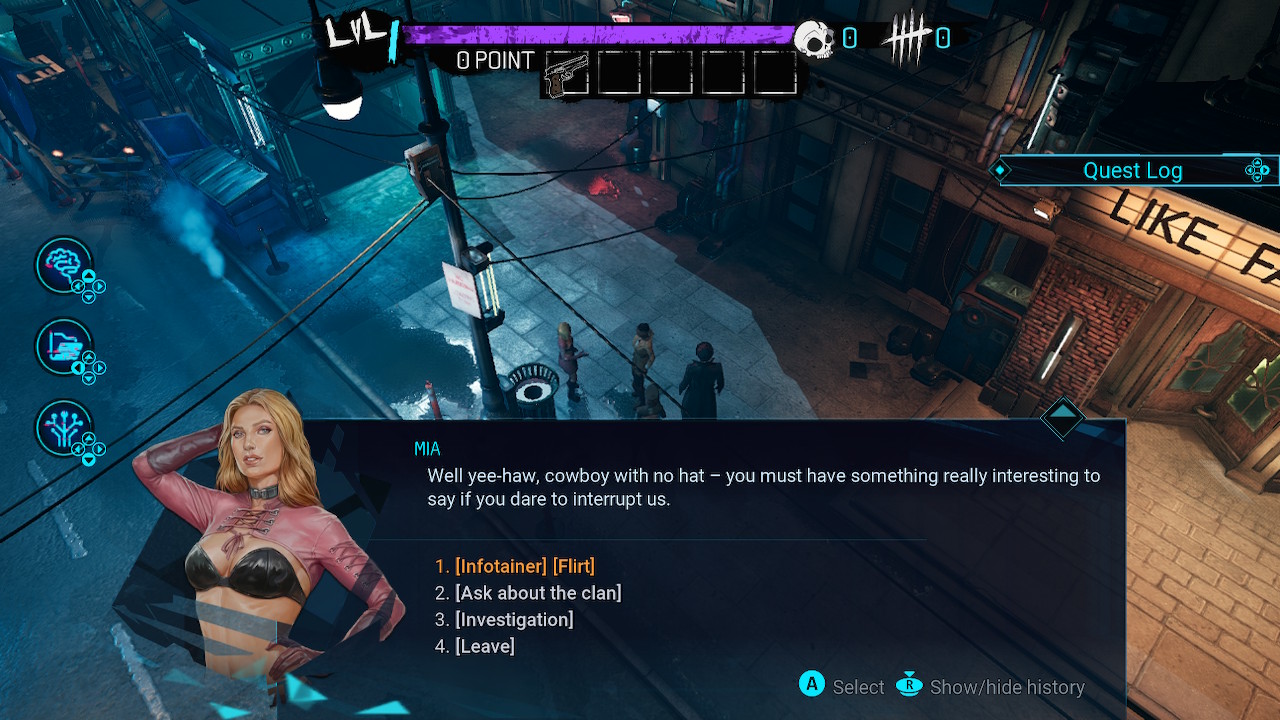 GameDec is an intriguing game with a fun mechanic for dialogue junkies like me. It also has fun with the tropes of current gaming. One of the worlds is a FarmVille clone where people might really be working themselves to death.

If the ending ends up being a little dissatisfying—you make a choice, and the game ends—it may be because any answer to the big puzzle of GameDec would be a come-down. You’ll get your answer, but will it make you happy? Was there something else you could have tried?

Dying Light 2 Walkthrough Part 1 and until the last part will include the full Dying Light 2...
PC

All the Wordle tips, hints, clues, and more you could ever wish for are now just a short...
Nintendo

Virtual reality threatens to be the next big thing in computing as we leave our ugly bags of...
News

Certain Affinity, a studio that's helped develop most mainline Halo games since the days of Halo 2, has...

Dying Light 2 Walkthrough Part 1 and until the...

When they're actually worth sitting through. For more awesome content,...

Image: The Pokémon Company / NintendoPokémon fans have, rather...

Image: NintendoMario's nipples are, surprisingly, a subject of great...

South Park: The Stick of Truth

Trey Parker and Matt Stone discuss the difficulties of...

Revisiting Binary Domain, a burly shooter with an infectious combat