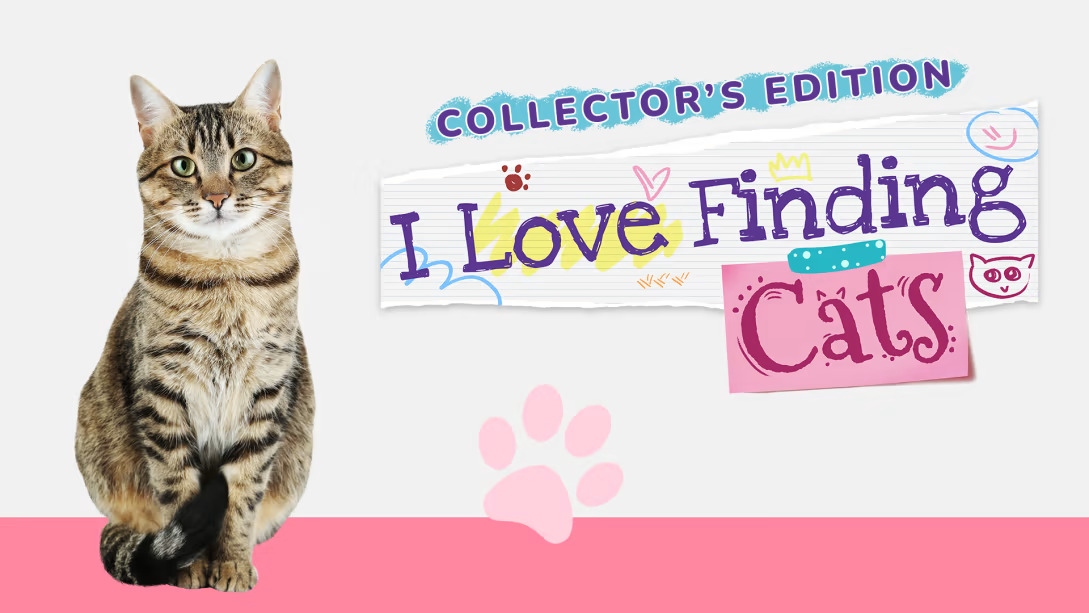 Do you love finding cats? If so, do I have the game for you. Even if you’re not into searching for felines, I love Finding Cats! for the Nintendo Switch is a puzzle game that could be worthy of your attention if you can forgive the clumsy controls.

I Love Finding Cats! is a hidden-object title at heart. Don’t worry; it’s not just about seeking kitties, as there are plenty of other items to find through the many levels. Cats are heavily incorporated into the theme, though, so take that into account if you’re not a cat person.

I Love Finding Cats! provides a series of locations to explore, each with three different puzzles to complete. The three types bring variation to the gameplay, keeping it from becoming monotonous. You can solve these in any order you like, which creates a more relaxing experience for players. 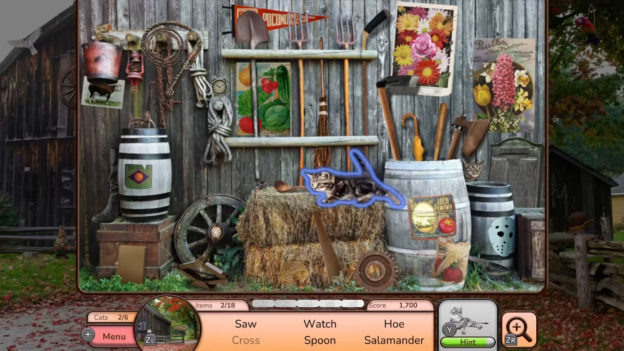 The first type of puzzle is the main part of the game, namely finding hidden objects – including cats. There are six kitties scattered about a photo-realistic image, along with a bunch of other items listed at the bottom of the screen. These could blend seamlessly into the scenery, like a bird, or stand out quite obviously, like a velociraptor. Your list is randomly generated each time you play, so you can come back and try again, this time seeking a cow or a statue, rather than an owl or a hockey stick. You can also zoom in to help seek out those hard-to-find items.

Next up is a spot-the-different puzzle. Here, two almost-identical pictures are presented side by side. Your mission? To find the 12 differences. Most of these are easy to spot, however you can’t zoom in this time. There are also three cats hidden for your added enjoyment.

The third puzzle type varies but is typically more of a traditional puzzle. You’re presented with an image of a cat that has pieces missing. These pieces are scattered about, leaving you to sort through them and match the right one to the right hole in the picture. Sometimes the puzzles are intact but with mixed-up pieces that you have to swap around until you unlock the picture. These were actually my favorite. 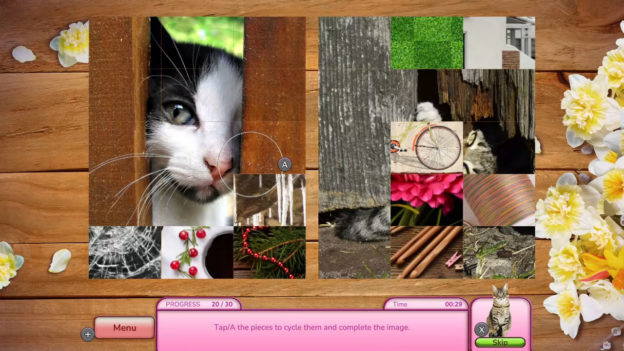 Despite the relaxing nature of the game, there’s plenty of replayability, too. You earn a score for your efforts, based on your time taken, hints used, and number of combos (multipliers when you find objects in quick succession). These contribute to an overall star rating.

Another extra incentive to continue playing is the cat room. Here you can purchase different breeds of cats, one of which you can select to be your companion on your travels. Just be warned – for some reason, money is only earned in hidden-object puzzles.

I Love Finding Cats! is fun. My kids love it. I found myself enjoying it, too. As a relaxing puzzle experience, it’s so innocuous and innocent in its presentation that it’s hard to fault. Unfortunately, I do have issues with some of the controls. 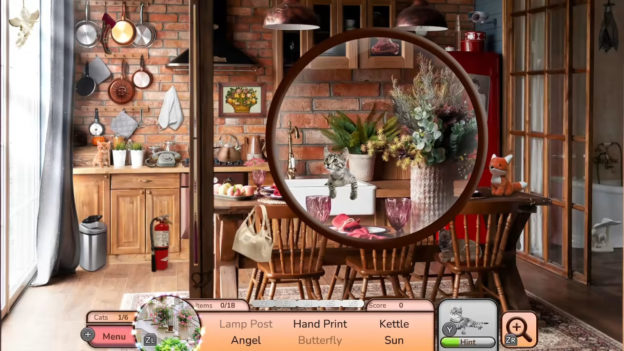 On the plus side, touch controls are supported, and work fairly well in handheld mode. Not perfectly, though. This imperfection is most noticeable in the third puzzle type, in which you have to move pieces around to fit them into the overall picture. You have to tap on a piece to highlight it before you can move it. This feels unintuitive when my instinct is to simply touch and drag, not tap, release, and then move.

Puzzle pieces also require extremely precise placement. It’s frustrating with the touch controls, due to the whole tap-move-repeat thing, making it fiddly to get it in the right place. It’s actually much worse in docked mode (or using controls in handheld mode). The “cursor” requires complete accuracy, yet it’s too sensitive and moves too quickly to easily place the pieces correctly. Either create a less sensitive controller, or make the pieces snap into place when they’re close enough.

The game’s simple aesthetic helps add to the relaxing experience, with ambient background music and colorful, photo-realistic images used throughout the game. They’re high quality enough to zoom into as well, even on a big television screen.

It’s also worth noting that this is the “collector’s edition” of the game, meaning there are bonus locations in addition to the main list. There’s even a couple of special holiday sections to help keep the holidays alive a little longer.

Overall, I Love Finding Cats! has a few things going for it, including varying puzzle types, a relaxing atmosphere, replayability options, and plenty of cats. The game’s controls leave a bit to be desired, however it’s still playable and recommended for puzzle fans – particularly if you’re a cat person!