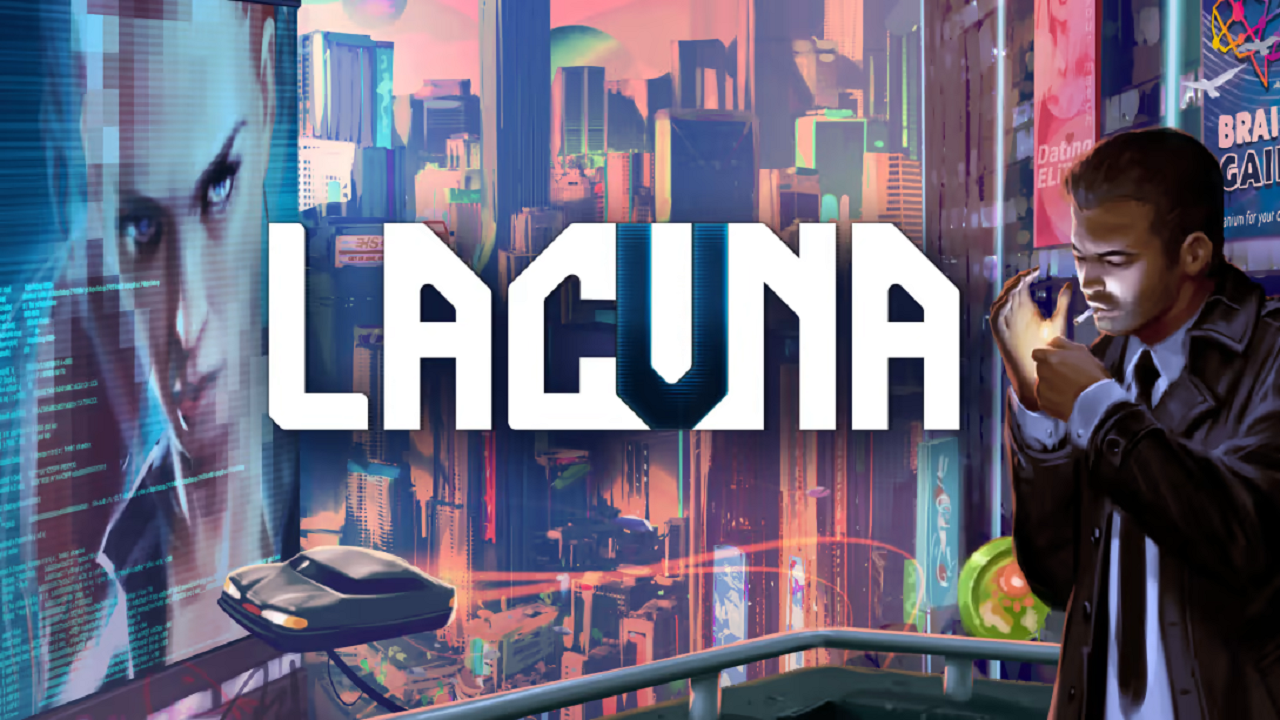 Lacuna is a mix of a puzzle and a narrative adventure game. It takes its cues from film noir, set in the distant future filled with corporate corruption, religious zealots, and politics. You’ll be required to do some detective work, solving crimes by finding clues during your investigation. If you enjoy games that make you think, you’ll love Lacuna.

After a relatively short tutorial that teaches you the mechanics of how to search for clues and submit “sheets” (your final answers to solving the puzzles), you’ll take control of the protagonist, CDI agent Neil Conrad. He’s a flawed character who has a broken relationship with his wife and child. The game throws you right into the story; the murder of a foreign diplomat has occurred, and you’ll need to help crack the case. However, as you dig deeper into the narrative, you’ll soon realize this is a much bigger situation, and poor agent Conrad is pulled into the middle of it all.

Most of the game will have you explore crime scenes, speak with suspects, and collect clues. You have the choice of either playing a good cop or a bad cop, which will drive the outcomes of the rest of the story. You use the clues you find to fill in “sheets” which you submit to your superiors when you think you’ve solved the puzzle. Get them wrong, and it will affect the outcome of the game.

If that’s not stressful enough, there are moments when you’ll be under pressure to select your dialog options within 30 seconds. These moments usually occur when you are interrogating a suspect. You’ll want to brush up on the clues you’ve gathered before going into these discussions. The game warns you before these events, but it doesn’t alleviate the stress.

You can’t save in the game; instead, the game will autosave at specific points in the story. Unfortunately, it didn’t allow me to save right before a critical decision point, which means if you want to see a different outcome, you’ll need to start over. I first found this rather frustrating, but I realized your choices are permanent. And that’s the whole point of the game.

The story is riveting, but a lot of names and factions are thrown at you. As a result, you need to pay attention to quite a bit of information. This can feel overwhelming, but you become familiar with the names and factions as the story progresses. The real turning point comes towards the end of the game, and there isn’t an option that makes you feel great. But that’s what I love about Lacuna; there are a lot of risks and actual impacts on the decisions you make. Your choices have meaning.

The pixel art is well done and creates the beautiful world in which Lacuna occurs. Besides the art, there is some voice acting when Conrad reflects on his choices. The music also sets the scene with its film noir influence.

Starting as a mobile game, Retro Bowl is now...

Deadpool PS5 Walkthrough Part 1 and until the last...

The moment-to-moment gameplay is a blast and the visuals...