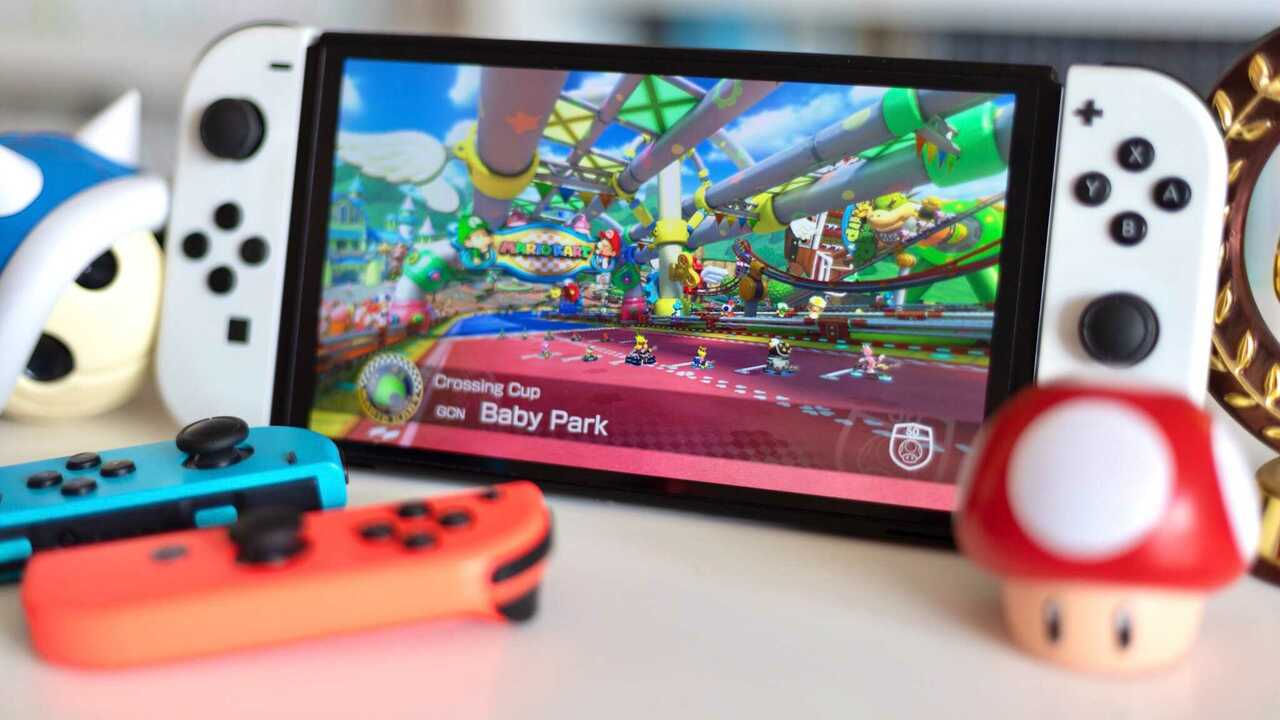 As someone who gets paid to have opinions about video games, I have to check myself a fair bit. Do I love a particular game because I’m blinded by nostalgia? Am I kinder to a particular genre because I have a soft spot for it, even if some of the games are a bit pants? Are there developers who I’m willing to forgive for their decisions because my emotions towards them? We all have various biases, it’s true.

But when it comes to Baby Park, I know I’m right.

Yes, I’m very attached to Mario Kart: Double Dash!! on the GameCube, because I loved the GameCube, and I played it to death. I think it’s got the best gimmicks (two drivers, unique items) and some of the best tracks (DK Mountain, Dino Dino Jungle), but I can be persuaded that I’m wrong on both those counts, because there are plenty of excellent contenders elsewhere in the Mario Kart series. But you absolutely cannot fight me on Baby Park. I will not budge.

Baby Park is brilliant because it’s a distillation of everything that makes Mario Kart so good. It’s a track that’s stripped down to its barest essence; nothing but you, several other drivers, the occasional item, and seven laps in which everything is up for grabs. You have to be not only good, but near-perfect to come in first — or just lucky, which is far more likely in the chaos of shells and bananas that Baby Park causes.

Those hairpin turns require a mastery of the drift-boost, and there’s always a chance that someone who’s technically in last place, despite only being a couple of seconds behind, can get one of the rubber-banding powerups and kick you into the dirt at any time.

Other Mario Kart courses are marathons — three laps of careful driving, memorising shortcuts but knowing when not to use them, and keeping an eye on who’s ahead of and behind you — but Baby Park is something between a sprint, a hurdle race, and an obstacle course. It’s a fascinating mix-up of what Mario Kart is all about, and… it’s honestly quite weird that we haven’t seen its like since.

It’s not that we haven’t had course innovation. Mount Wario, for instance, is a long, linear, single-track course from start to end with no repetition, and that’s sort of the opposite of what Baby Park is all about. Instead of a tight, fast race that’s over in a matter of minutes, Mount Wario is a much longer test of skill. There’s more course to memorise, and moments where the race can be turned on its head by a single shortcut or collision.

Then, there are the courses that change, like Grumble Volcano, which crumbles and shrinks after every single lap. Suddenly, your wide corners are too dangerous, and you have to be much more concerned with avoiding lava than with finding the perfect line. Hyrule Castle and Thwomp Ruins let you unlock shortcuts via a series of hard-to-pull-off tricks, making the race partly about good driving and partly about hoping you can claw back the lead. And Piranha Plant Slide (known as Piranha Plant Pipeway in British English, which I didn’t realise was a regional name) is a masterpiece of “OH GOD THIS IS TOO FAST”-ness that separates the Mario-men from the Baby Mario-boys.

We’ve even had roughly a billion re-imaginings of Rainbow Road… and while I think they’re all fantastic, and I love the iterative nature of Rainbow Roads across the Mario Kart series, I’m wondering… what would it look like if another course had the same treatment? A course like… wait for it… Baby Park?

The Peach vs. Bowser Tour is wrapping up in #MarioKartTour. The next tour takes place in an amusement park full of attractions! Next up is the Cat Tour, featuring GCN Baby Park! pic.twitter.com/uGa6kknL8g— Mario Kart Tour (@mariokarttourEN) May 27, 2022

So, despite years of fantastic innovation (that I’m definitely not just going to write off), we haven’t seen too much of the Baby Park genre of courses — the fast, simple, short kind. And I think that those might be my favourites, or at the very least, necessary palate-cleansers in-between the bigger ones. I think the closest we’ve got is Excitebike Arena, another fantastic track that keeps things pared down to focus on tricks instead of Baby Park’s focus on drifting, but that’s about it.

(And, for the record, I don’t think that the simplistic courses — like the Super Mario Kart ones — are really the same thing. They’re just flat courses, not hyper-distillations of driving mechanics like Baby Park.)

I want to see the courses get mixed up a little with this Mario Kart 8 Deluxe Booster Course Pass DLC, but so far, they’ve all been quite safe — or “B-side filler”, as Ollie’s review of Wave 2 called them.

Be honest, do you lean in real life when turning corners in Mario Kart? — Image: Polygon

I understand why Nintendo has decided to play it safe. Doubling the number of courses in a Mario Kart game over two years is an insane undertaking, and if I’m totally honest, one they didn’t really need to do. I think the value proposition of 25 or 30 courses over the same period of time, or even just 12 courses over a year, one per month, would have been fine! But no, for reasons we may never really understand, Nintendo has decided to put out 48 courses, and I can’t complain too much about it, because it’s incredibly generous. I think some of us just would have preferred quality over quantity.

And yes, by “quality”, I mean more Baby Park.

But now that we know that some of those courses, like Sky-High Sundae, will be totally new (or… partially new, at least, because it’s also coming to Mario Kart Tour), perhaps we can hope for some good ol’ fashioned Baby Park-style mayhem.

Is Baby Park the best course? Do you want to see more skill-based tracks? Tell us your Mario Kart thoughts (and your “other” answers to the poll!) in the usual place.

Not so long ago, just having a steering wheel peripheral basically made you a racing game pro. And...
Nintendo

Image: Nintendo Life / GemmaAs someone who gets paid to have opinions about video games, I have to...
News

Does the Amazing Spider-Man live up to his name? http://www.gametrailers.com/games/xckfvb/the-amazing-spider-man ...

One of the founding members of DMA Design, the...

They have a fight; Triangle wins. ...

Kinduo is one of those cute puzzle platformers that...

Random: This Elden Ring Artwork Made in Dreams Is Simply