Conquests of Camelot proved Sierra adventure games could go beyond 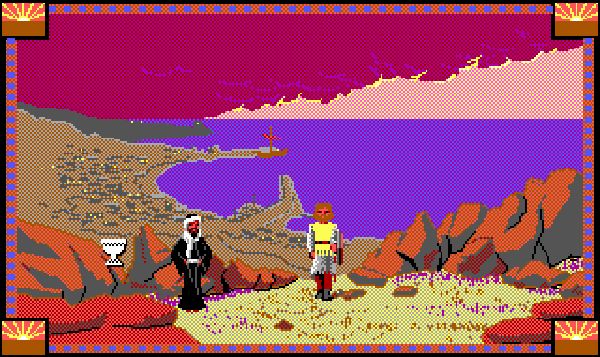 This article first appeared in issue 354 of PC Gamer magazine, in our PC Gaming Legends feature. Every month we run exclusive features exploring the world of PC gaming—from behind-the-scenes previews, to incredible community stories, to fascinating interviews, and more.

Conquests of Camelot introduced me to the merciless difficulty of old Sierra point-and-click adventures just a few minutes in. As King Arthur, I filled my purse with coin in preparation for a long journey to find the Holy Grail, picked up a magical lodestone from Merlin to guide me, and gave Guinevere a kiss before heading out the gates of Camelot—or trying to. The castle gate fell onto my head as I rode under it, crushing me to death.

“It is terribly unwise to start a sacred mission without the blessings of the gods,” Conquests of Camelot admonished. Later I’d be gored by a wild boar, skewered on the lance of the Black Knight, and fall through thin ice, freezing to death. As in most of Sierra’s adventure games, surviving to see the end of Conquests of Camelot was a real challenge. Its puzzles were beyond my ten-year-old brain, but I didn’t care—getting to be King Arthur made Conquests of Camelot as mystical an object to me as the Grail itself.

A busy life in Camelot

By the late ’80s Sierra had expanded beyond King’s Quest and Space Quest to other adventure series like Leisure Suit Larry and Police Quest, but this game felt like a step towards maturity. Sierra hired Christy Marx, head writer of the cartoon Jem and the Holograms, who had no experience designing games but a long list of cartoons and comics behind her. Undaunted by that inexperience, Marx threw herself into research and wrote a game that even today feels unusually rich and devoted to its source material.

As a kid this seemed like the definitive Arthur story to me, an adventure to get lost in once I’d worn out my tape of Disney’s The Sword in the Stone. I didn’t read The Once and Future King until years later, so Conquests of Camelot was my main introduction to knights Gawain and Lancelot and the legend of the Grail. Marx’s writing has a classical flavour to it, more approachable than TH White’s novel but still steeped in a bit of Ye Olde English. It’s not tedious like Police Quest or as silly as most of Sierra’s other adventures but still has a wry streak, like the text parser asking “Your bidding, M’Lord”.

Conquests of Camelot ambitiously tried to capture everything that would go into a classic Arthurian quest, including a jousting contest, a sword fight against a mighty Saracen, and magic riddles. The action scenes were as clunky and frustrating as you’d expect from an adventure game in 1990, but I didn’t know any better at the time—and neither did Sierra, really, which had only released one game in the Quest for Glory series at that point.

Thirty years later Conquests of Camelot may look rudimentary, and it sadly never got a VGA upgrade like many of Sierra’s other early adventures. But it was one of my most formative PC gaming experiences, and not just because it taught me to save constantly. My dad and I played it together, and for me it ignited a passion for games with storytelling and puzzles before I understood adventure games were a defined genre. Years later, when he upgraded the family PC to a Pentium, I got an IBM 486 of my very own and spent hours playing LucasArts adventures like Sam & Max and Indiana Jones & the Fate of Atlantis.

Camelot also taught me that people went onto the internet and wrote FAQs with the answers to puzzles I could never solve myself. I printed out a guide and followed it to lead Arthur through Jerusalem and, at long last, claim the Holy Grail. The lesson about prayer didn’t stick, though. I’m still a heathen—I just know not to trust castle gates.