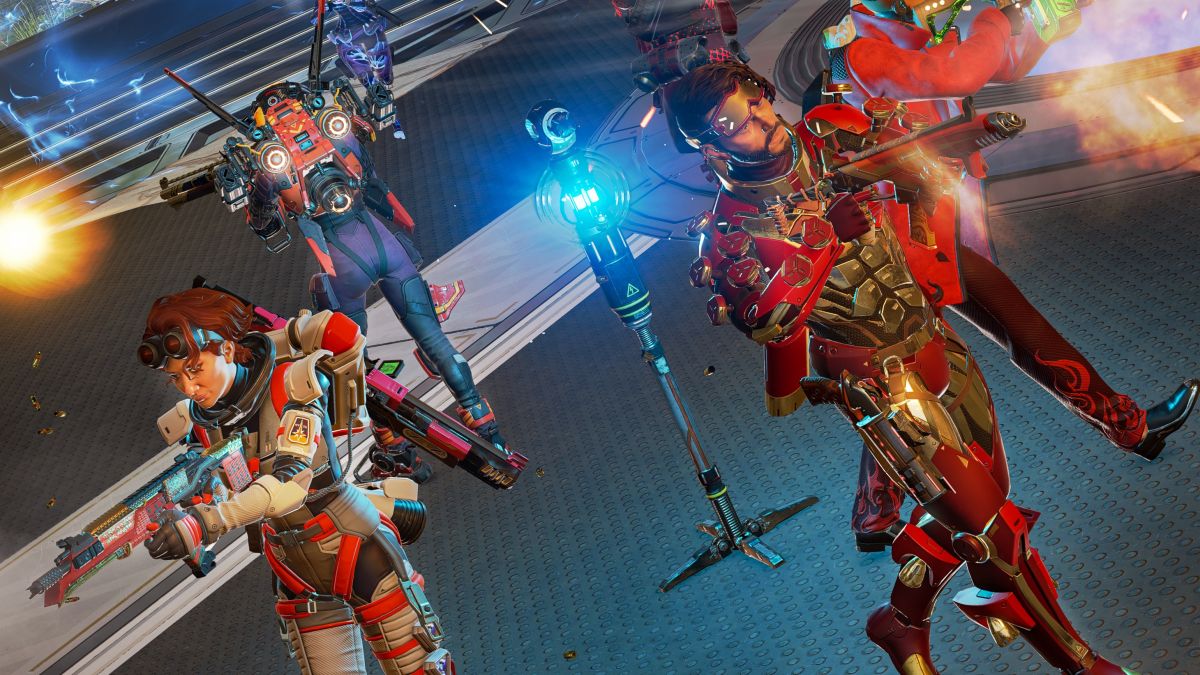 Apex Legends has a problem. For as much as I absolutely adore the game, its world and its characters and its high-octane buttsliding brawls, Apex is a bloody hard game to introduce to friends—demanding you keep track of dense maps, loot locations, character abilities, ammo, hop-ups, weapon recoil, bullet drop and a movement ceiling that’s only getting higher.

Even in unranked battle royale, those first dozen hours can be a brutal affair, and I’ve had many pals drop off the game as they struggle to nab even a single kill over the course of an evening. What Apex needs is a chill, low pressure alternative that lets you get a feel for the game’s cast and arsenal without worrying too much about dying.

What Apex needs is Control.

Arriving with Season 12: Defiance next week, Control isn’t the first time Respawn has experimented with new gamemodes. But even including a Valorant-inspired Arenas mode permanently introduced back in early 2021, Control might be the most ambitious mix-up to Apex Legends yet.

Here’s how it works. Two teams of 9 (formed of three three-person squads apiece) fight over three control points spread out over a portion of a BR map—currently the Hammond Labs field in Season 12’s revamped Olympus, or Storm Point’s Barometer. Stand near a point and you’ll capture it, increasing how quickly your team’s score accrues. The first team to 1250 wins—though a team will win immediately if they manage to ‘lock out’ their foes by capturing all 3 and holding them for 90 seconds.

That’ll sound instantly familiar to anyone who’s played a Call of Duty, Battlefield, Team Fortress 2, or really any team shooter prior to the battle royale craze. But Control has a few Apex-specific quirks to spice things up. Occasionally, flash events will throw a wrench into the mix by offering double capture points for a specific objective, or raining down care packages across the map.

But Control also smoothes out the fussier parts of Apex’s scavenging to get you straight into the fight, without worrying about things like ammo or shields. Like previous limited-time modes (LTMs), there’s a rotating loadout system that lets you pick from set starting weapons, all of which have unlimited ammo. You have unlimited medkits to patch yourself up, but shields will only recharge automatically if you stay out of the fire for a few seconds (longer if you’re completely shattered).

A rating system also racks up the longer you stay alive, play with your squad, capture points and kill opponents. More than just your score, each tier of ratings you climb boosts your weapon attachments up a level. The biggest change for Apex is that respawns are infinite, and you can jump back into the match from any control point your team currently owns and is connected to your home base (to prevent sneaky back-cap respawns), with a new legend or loadout should you fancy.

What this results in is a mode that feels loud, chaotic and massive in a way that even a 60 player battle royale never quite hits. The fighting is constant, teams exchanging sniper fire over the Hammond Labs fields, sneaky players nipping about in tridents back-capping points, an endless riot of Bangalore airstrikes and Maggie wrecking balls.  Sure, sometimes you’ll stumble blindly into six flatlines trained on your head, but with death only costing a few seconds of downtime, I’m more willing to risk making nonsensical hail-mary flanks and cheeky little solo captures.

It is a mode that feels at once like a Halo mode played with Overwatch characters with a hint of Battlefield’s scale, and I love it.

Look, I adore Apex’s take on battle royale. Roaming an open map like an apex predator, picking fights carefully and building my perfect loadout, that’ll always be what I’m here for first and foremost. But it’s a mode built on tension, and while that tension makes each win feel like the most desperate, hard-fought win of your life, it can feel exhausting.

That’s not to say Control can’t be nail biting, mind. Some of our preview games came down to the wire, bitter fights over capture points as both teams’ scores creep agonisingly through the final percentages. But it’s a different kind of tension, one where I don’t feel like my individual performance is as instrumental to the team, giving me space to experiment.

Control offers an alternative where I can just kick back and engage in some of those great Apex fights, without worrying that each death will punt me back to the main menu. It’s the kind of mode I can imagine will be great for trying out new legends (not that I’ll ever try out new legends), get a feel for different guns, practice my wall-bounces or tap-strafes in one-on-ones, or just build confidence in fighting other actual human players.

I feel terrible asking pals to come and play Apex with me right now, knowing they’ll be dragged into the kind of matches you end up with after 850+ hours in battle royale. But Control feels like a great way to share what I adore about Apex with them in a casual, care-free brawl. It’s just a shame it’ll only be around for three weeks.

Look, I get why there’s apprehension on Respawn’s part. In a press panel earlier this week, the developer explained that Control is such a departure from the established Apex form that they’re using this season as a way to test the waters, see how the community responds to it. If that response is good then hey, maybe it’ll return—or better yet, find a permanent spot on the roster.

I really hope it does, because right now Control is the perfect complement to battle royale in a way last year’s Arenas never were. It’s not even like I dislike Arenas either—it’s a great way to learn guns and get right into a 3v3 fight, and there’s no high like clawing out a win after 9 rounds of tense back and forth.

But Arenas are still high stakes, bitter affairs, and while they offer a very different gameplay experience to BR, it’s still playing in that same emotional space. Control feels like a meaningfully different addition to the Apex catalogue, something I can dip into when I want to warm up my aim, cool off after a ranked session, or just muck about when I don’t quite feel like committing to a full-throttle battle royale.

More than that, though, Control is a perfect on-ramp to show people why Apex is so goddamn good. I’m not going to pretend like Apex isn’t outrageously popular (EA’s quarterly results showed more than 28 million new players joined in the last year). But since its announcement, I’ve seen so much excitement from friends who bounced off the game’s punishing learning curve that this, finally, is what might bring them back to Apex.

I’m excited to jump back into Control with those people come February 8, and I reckon we’ll have a blast for those brief three weeks. But Control is the complement to battle royale Apex needs, and I’m hopeful we’ll see its eventual (and permanent) return someday soon.

Blackwind is a top-down sci-fi action game that...

Follow the roadie Eddie Riggs as he is send...

Players must work together to help save their missing...