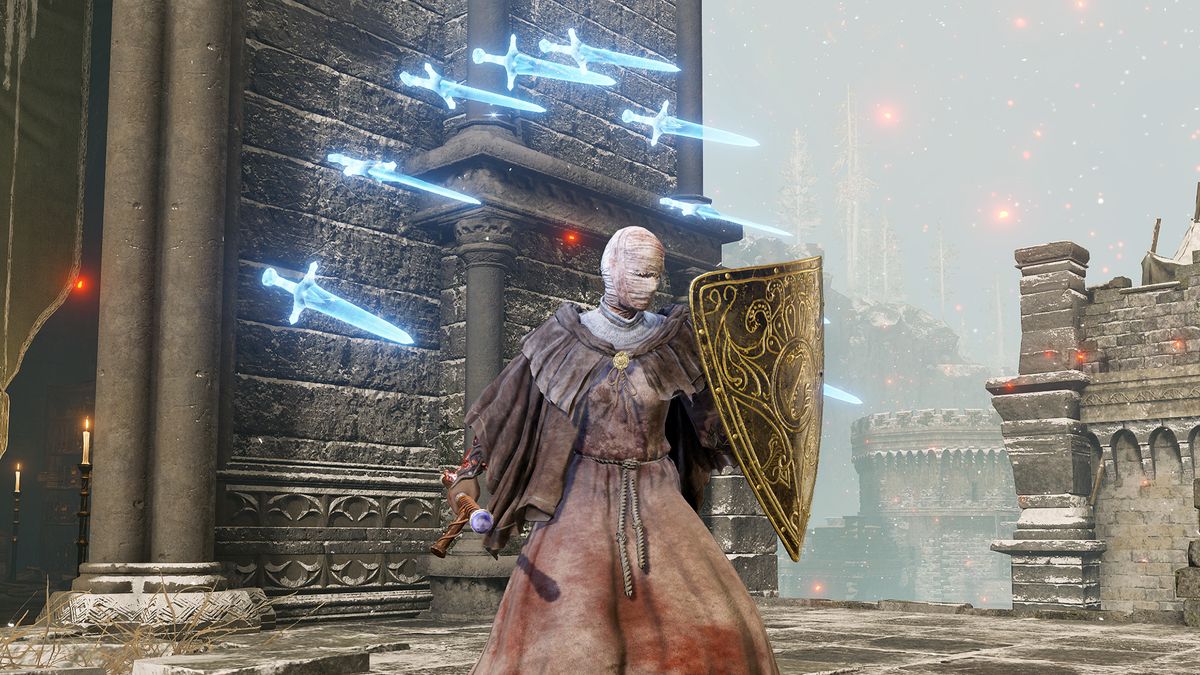 When FromSoftware buffed the efficacy of shields in the latest patch for Elden Ring, it surely didn’t mean to inadvertently create a new exploitable PvP build. But as is often the case for game developers, just as you whack one exploit-mole, another one emerges.

Elden Ring players have found a new way to one-shot opponents (and many enemies in PvE) with a simple shield skill that sends occasionally invisible blades at opponents for ridiculous amounts of damage.

The Carian Retaliation build uses the Ash of War of the same name applied to a shield. The skill lets you parry spells to gain several powerful sword projectiles that fire off at enemies. The damage of the skill scales based on your shield’s upgrade level, and since it’s a parry, it seems to do high amounts of damage as a way to reward what should be a skilled maneuver. But here’s the galaxy-brained catch: you can parry your own spells.

If you activate an item like the Wraith Calling Bell that emits its own spell-like projectiles, you can immediately parry after and activate Carian Retaliation. This is also possible with other items like Glintstone Scraps that function similarly. All together it’s an easy setup for an attack that some people report will instantly kill people at 50 vigor or below, which is quite a bit for the average player.

It gets worse too. The magical blades that Carian Retaliation spawns don’t visibly launch forward on the enemy players’ screen. There’s almost no way to reliably dodge them without a visual indicator for when to roll or strafe out of the way. And if the exploiter uses the spell before they invade you, the magical swords are completely invisible.

The bug seems to be the fact that you can parry your own spells and the animation of the swords only showing up on the user’s screen. The high damage it inflicts might be intentional given that it should be a difficult thing to pull off with a devastating reward.

Compared to the Deathblight build that FromSoftware eradicated in the most recent patch, this one might be worse, considering the required item is attainable much earlier in the game. If you’re looking to brawl with other Elden Ring players, pray the invisible blades don’t find you.

What We Hope Project Spartacus Brings to a PlayStation Game

It looks like a PlayStation game pass is on...