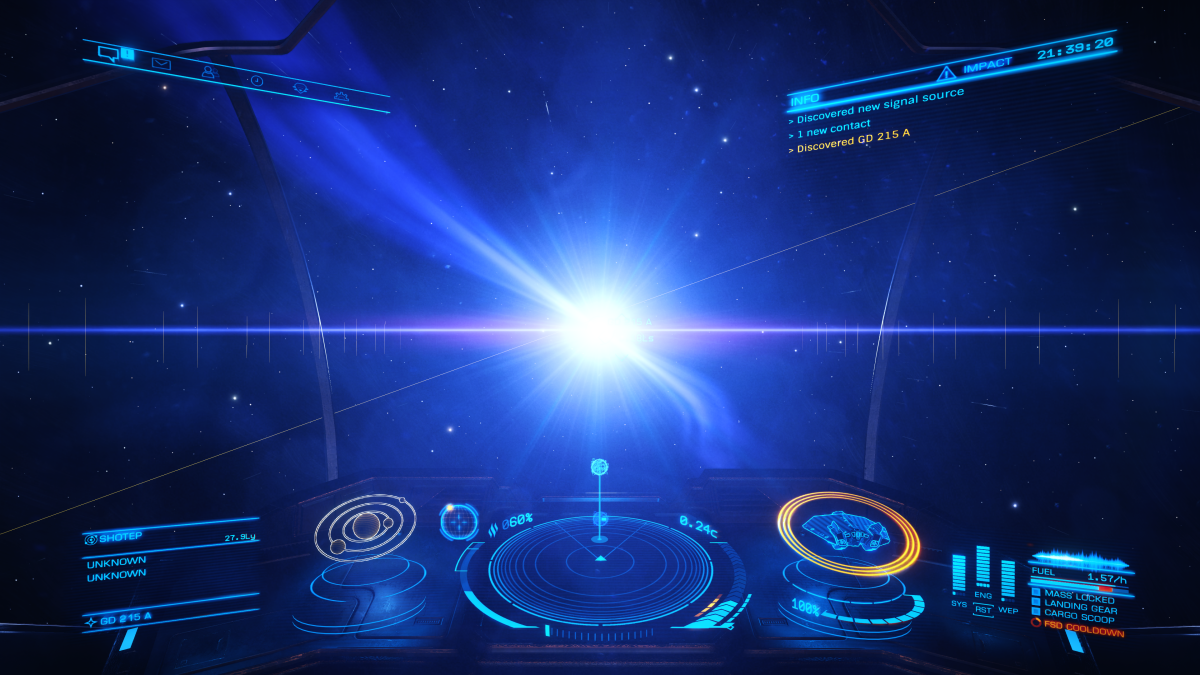 Great moments in PC gaming are bite-sized celebrations of some of our favorite gaming memories.

Whether you’re a bounty hunter, an explorer, or a glorified space trucker, doing almost anything in Elite Dangerous means jumping between systems. It’s one of the game’s most basic interactions—something you’ll do multiple times in order to complete a mission. As such, the mechanics of it are pretty simple: you plot your route on the galactic map, point yourself towards the target system, and hit a single button to start up the sequence.

But simple doesn’t mean mundane. This is one of the most common interactions in the game, and yet it’s full of wonder and ceremony. It starts when you first activate the jump, the onboard computer chiming in to announce “Frame Shift Drive charging”. The drive spools up—an intense, bassy hum that builds in range and depth rather than volume. And then the countdown activates—your computer again narrating the process and ending with a dispassionate “Engage” that signals your departure.

Elite’s version of hyperspace is known as “witch-space”, a sort of mysterious, spooky alternate dimension that ships use to move between systems. This isn’t just a lore-based handwave for explaining hyperspace travel—at least it isn’t just that. As you travel through hyperspace, you hear the sound of wind, or perhaps ghostly whispers—hints that there’s something here beyond your understanding of the universe. And then the quiet is interrupted.

Much of Elite’s atmosphere is carried by the peerless sound design, but your exit from hyperspace—the sudden, violent arrival—is a visual shock too. The star of your target system rushes into view, forcing you to take immediate action to manoeuvre away. Even after hundreds of hours of doing what is ultimately a routine action, it’s a discomforting experience—just startling enough that it still sets me on edge.

There are other, rarer hyperspace experiences in the game, too—twists on the basic interaction that produce some truly memorable moments. Seeing a capital ship exit hyperspace is undeniably impressive—experiencing the imposing artificial roar of a massive craft ripping a dimensional tear into space. And then there’s the sheer terror of a Thargoid hyperdiction, that takes the disquietingly familiar experience and flips it on its head—letting you experience what happens when the whole thing goes wrong.

Elite Dangerous hasn’t had the best time of it lately. Its Odyssey expansion was widely criticised for bugs and poor performance, and even after numerous patches still holds a mostly negative rating on Steam. Ultimately I haven’t bothered with the expansion’s new features—foot combat isn’t what I want from the game. When I play, it’s for the simple escapism of travelling the galaxy, enjoying its more simple pleasures as I plot a course to the next system and prepare to jump.

Rainbow operatives are back in action against a threat...

Last of Us 2 Director Explains Why Its Haptics Suddenly

Co-Diretor for The Last of Us Part II explains...