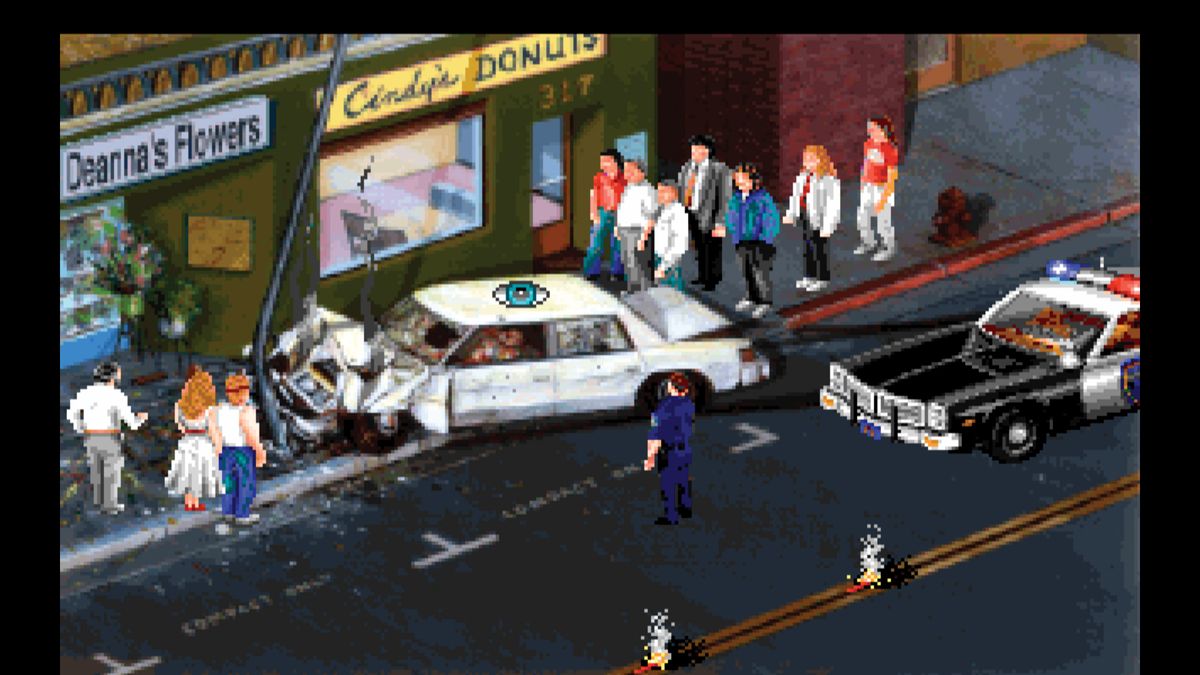 From 2010 to 2014 Richard Cobbett wrote Crapshoot, a column about rolling the dice to bring random games back into the light.

You have the right to watch the above video. You do not have to laugh, but any sniggers or guilty smirks may be taken and used against you. If you do not have a sense of humour, one may be provided. Everything else will assume the TV show “Castle” is an accurate depiction of police procedure.

So, there we go. I’ve had a couple of requests for Police Quest recently, and thought it would be fun to try one of these again. Yes, I’ve done Police Quest 1 before, but it didn’t seem to make sense to leave it out just because of that. Also, there are new gags, I promise.

So, more detailed notes, snippets and other bits of info that either didn’t make it into the video, or could do with extra detail. I should start with, no, of course I don’t hate the series. I actually like Police Quest 1 VGA a lot. I think it’s a fantastic remake that adds a lot of character to a game that often lacked it (just compare the writing on Sweet Cheeks and Dooley in the clips). It’s very, very silly, in the cop-fever-dream way that I’ve spoken of before, but in really likeable ways.

It’s full of frustrations, complaints of low wages, never getting any respect from people… but also daydreams like Sonny saving Marie from her distinctly casual life of bed-hopping, or getting caught up in big undercover sting operations and the like instead of just chasing cars and booking scumbags. Despite all the procedure, it never feels particularly realistic, but it still feels like an ‘inside’ game in terms of attitude, focus and direction.

It’s just a shame the series hadn’t launched a year or two later on, when there’d have been more likelihood of a recurring cast instead of clearing almost everyone out each game. Police Quest could so easily have gotten a precinct feel going, where you bounced between different people each case and got to see different sides of the characters. Oh, well. C’est la vie, I suppose.

Yeah, Marie’s hooker origins are swept under the table as fast as possible in this series.

As for Police Quest 2, there’s a difference between ‘bad game’ and ‘game I don’t like much’, and I see PQ2 as firmly the latter. It’s caught between two worlds, and the fussiness bugged me more as a result. There’s a particularly bad scene, which I mentioned in a deleted bit in the video, that exists solely to throw off your gun’s alignment and make you do a whole puzzle again.

The actual story isn’t that interesting either, due to really having no grip on drama. Bains is out for vengeance, and while you can certainly argue that he’ll be back for Sonny, hopping a flight to another town really defuses that. And speaking of defusing things, why the hell do the terrorists have a timebomb to hijack a flight?

Police Quest 3 though mostly stinks. The premise of a murderous cult isn’t horrible, but tying it to the Bains clan was a mistake (a non-canonical book goes a step further by making Morales Bains’ half-sister), and they actually get up to surprisingly little of note beyond burning down their own stuff, killing themselves, and finally surrendering. Morales though shouldn’t even remotely have been involved, and needed much, much better writing.

To make her work though, the actual Lytton PD needed to be more developed—a place where that kind of personality could fester, as opposed to one where everyone reads reports saying things like “Borderline Sociopath” and just goes “Yep. That’s our Pat!” And even that is really giving this mostly empty building with a few apathetic cops in it too much credit.

What joke was this part of? The world may never find out. And shouldn’t care.

So, onto a couple of cool things that were deleted for various reasons, usually bad line reads I wasn’t able to salvage. First, there was a Japanese version of Police Quest 2, and it’s… great. Not that much was changed overall, but it’s worth checking out to compare and contrast. Hit HG101 to do just that. Try not to scream at the sight of the new boss. He is… quite something. Yes.

Second, something I’d never noticed before. Gordon Brown is a fictional journalist.

Also the state of your economy. Yes.

Third, I had a bit more on the authorship of the games, though that’s more interesting for the number of hands that it went through. Al Lowe did an uncredited redesign/polish that I mentioned in passing (and he goes into more detail in it in this book). Essentially, Walls’ first design had something of a problem—it was written from the point of view of someone for whom cop training was deeply embedded, which wasn’t going to work that well in the wider market. Lowe’s job was to pound it into shape, and while I don’t know where Walls ended, Lowe began, or indeed, anyone else on the team had their own input, it’s hard not to look at the game that we got and see more than a few fingerprints on there. The nudity thing is something I don’t ever remember seeing in a non-porny game before, but could have livened a few up.

As a snippet: “Jim had written up this entire story, the programmer had implemented it, but without any of the things Jim didn’t think of, therefore it was impossible to play! You’d get into a situation and say ‘what would I do?’. And Jim has this great wealth of knowledge of police work, and he’d say ‘It’s obvious!’ Well, it’s obvious to you, because you’ve been trained as a police officer! So the big project that summer was to go through and come up with any kind of hints, some kind of dialogue and radio commands that would enable you to figure out what the hell you were supposed to be doing!”

In retrospect, maybe the programmer just figured “I’ll do what Jim says… and add some nudity for kicks.”

(When I recorded, I said that you could have Sonny strip ‘anywhere’. That’s not quite true—you can’t around characters like Helen. But still. The woman who catches him if he comes out of the shower in a towel incidentally is Laura, a Homicide detective, and the station prankster. That makes Sonny’s death at that point somewhat odd, since she’s probably the least likely person in the entire building to raise trouble, but it probably beats him becoming Towel Cop. And had there been the option, he would indeed have been Towel Cop. Laura is the one who put the chicken in the office, and as of Police Quest 2 has been ‘retired’ after getting caught. Pity. Like a few of the characters, she had potential, even if the general level of the writing prior to PQ3 was dire, and it didn’t improve that much afterwards.)

The dreadful Man Enough has appeared in Crapshoot form before. Walls didn’t design it, it’s just from the company he left Sierra to work with. Tsunami Games/Media is no real loss to the industry, honestly. At some point, we may look at Blue Force or Police Quest: Open Season here, but it won’t be for a while. Need a break from cops and robbers at this point.

Ah, Tsunami. Gone, but not remembered. Which is like being forgotten, only with more ‘meh’.

Music from the games, including the full version of Cell Block Love from Leisure Suit Larry 6, can be found in the Quest Studios Archive. Plenty of Let’s Plays are available of the whole series. If you’d rather play the games, Police Quest 3 is really janky these days, but 4 remains a very solid—if ultra picky—tactical shooter. Who made it? Little company called Irrational. You’ve probably never heard of them.

And that’ll do for now. Back to text next week. Not sure when there’ll be another video, but if people enjoy it, there’ll probably be another one along before too long. If you missed the last couple, they were on American Laser Games (Space Pirates, Mad Dog McCree, Who Shot Johnny Rock) and Riana Rouge. As ever, apologies for my many, many mistakes. Learning as I go, and there is a lot to learn.

Riders Republic is one of my biggest surprises of...

real spiderman vs fake spiderman in bgmi and pubgm Thankyou...

Random: Check Out This Adorable ‘Coat’ For Your SNES

If there's one video game accessory that's been unfairly...