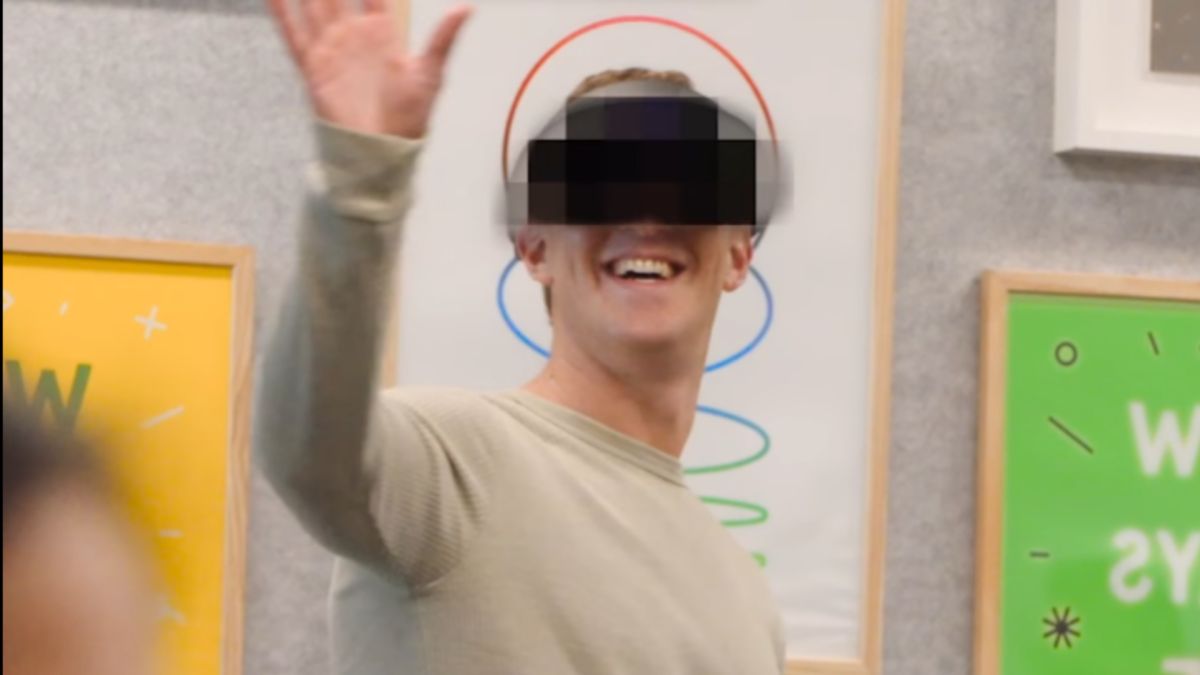 Mark Zuckerburg, the Zuck himself, has been spotted flaunting Meta’s upcoming VR headset in a demo video on his Facebook page (opens in new tab), but for reasons we can’t quite place, the company has decided to blur out the VR headset. Either by way of generating more hype, or just being vague for the fun of it, we’re still none the wiser about Project Cambria (opens in new tab).

The Byte (opens in new tab) brought the hands-on to our attention, asking the important questions: “Is there a giant dong attached to the front of the device?”

I’m inclined to share their sentiment of cynicism. I mean, why blur out the one thing we actually care about in the video? Great, there are adorable critters in the new ‘experience, and you can pet them, but show us some of that sweet technology, Zuck.

The demo, along with a recent mixed-reality preview (opens in new tab), shows that the headset will give users a full-color passthrough, so they can see their surroundings better. It’s a step up from the colorless passthroughs some of the best VR headsets (opens in new tab) today come with.

Other than that, we can see at least that the prototype is black. Though that could change, considering the color scheme we’re used to. We also know the upcoming headset will come with eye and face tracking “so that your avatar can make eye contact and facial expressions, which dramatically improves your sense of presence.”

Superb. But can it run Crysis?

What’s become painfully clear is that the upcoming high-end VR headset doesn’t appear to be for gamers like you and I. It’s being marketed as a desktop PC replacement for “productivity and fun,” such as giving long-eared aliens scritches, or sweating into the VR headset while pretending you’re not alone doing exercise.

Unfortunately, we gamers are unlikely to see the Oculus Quest Pro come out anytime this year (opens in new tab), as Meta’s focus remains on Project Cambria. Although we should be seeing four new VR headsets by 2024 (opens in new tab), which will be an interesting ride as we exodus into our all-encompassing new home in Zuck’s metaverse.

Mark Zuckerburg, the Zuck himself, has been spotted flaunting Meta's upcoming VR headset in a demo video on...
Nintendo

Subscribe to Nintendo Life on YouTube Update Deadly Dozen Reloaded has stormed its way onto Steam and...
News

The Prince of Persia: The Sands of Time Remake has not been canceled, but an issue with timing...

The latest Call of Duty game was officially unveiled...

Learn the basics of the future sports game. Watch more...

We haven't seen the bloody thing in what feels...

Last week we asked to zoom in close for...

Fireline Games has announced Fueled Up, its new four-player...