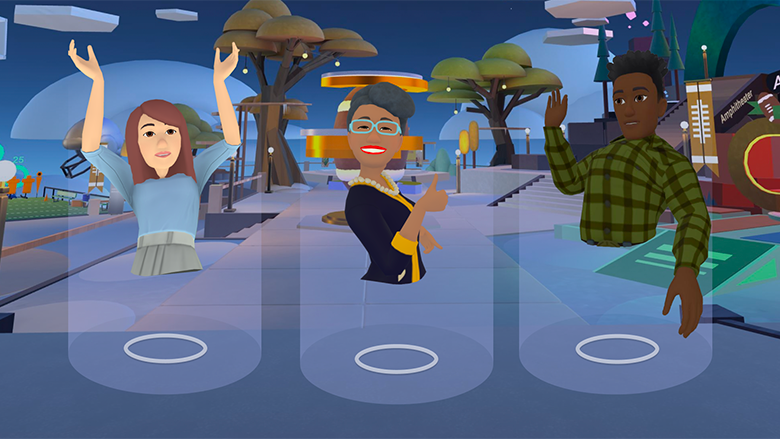 Meta, the company formerly known as Facebook, is launching a new feature for its Horizon Worlds and Horizon Venues VR platforms that it hopes will cut down on harassment, abuse, and generally creepy behaviour from its users. Called Personal Boundary, the new option prevents avatars from coming too close to one another in virtual worlds, “creating more personal space for people and making it easier to avoid unwanted interactions.”

The system sounds quite simple in its workings: When someone gets too close, their forward movement is halted. The distance between avatars will be locked to just under four feet at launch, and there’s no visible barrier or haptic feedback when someone is halted, so users won’t be aware that someone is trying to run up on them. Avatars can move past one another when Personal Boundary is active, according to The Verge, so the system can’t be used to block or trap users.

“We are intentionally rolling out Personal Boundary as always on, by default, because we think this will help to set behavioral norms—and that’s important for a relatively new medium like VR,” Meta said. “In the future, we’ll explore the possibility of adding in new controls and UI changes, like letting people customize the size of their Personal Boundary.”

As for why this sort of thing is necessary, the simple truth is that it’s for the same reason forum moderators are necessary: Some people just cannot bring themselves to behave in an online setting. Creepy behavior and outright abuse are unfortunately common in VR. The New York Times, for instance, reported in December 2021 that more than 100 “problematic incidents” were recorded by a single person over an 11-hour session in VRChat, some involving people who claimed to be under 13.

More recently, Bloomberg tech columnist Parmy Olson told the BBC that she’d had her own “creepy” experiences in Horizon Worlds, which included men taking virtual pictures of her and moving in very closely to speak to her, which “sounds like someone is literally talking into your ear.”

“I was talking to another lady and within minutes of us chatting a guy came up and started chatting to us and following us around saying inappropriate things and we had to block him,” Olson said. “I have since heard of other women who have had similar experiences.”

On December 9, the day Horizon Worlds went live, a beta tester revealed in the official Horizon group on Facebook (via The Verge) that she’d been virtually groped by another user during a session.

“Sexual harassment is no joke on the regular internet, but being in VR adds another layer that makes the event more intense,” the tester wrote. “Not only was I groped last night, but there were other people there who supported this behavior which made me feel isolated in the Plaza.”

In that instance, Meta determined that the tester had not used Horizon Worlds’ built-in safety features to block interactions, which may be why Personal Boundary is enabled by default for all users: Meta’s Horizon vice president Vivek Sharma said at the time that he wanted to ensure that Horizon Worlds’ blocking feature is “trivially easy and findable.”

“We believe Personal Boundary is a powerful example of how VR has the potential to help people interact comfortably,” Meta said. “It’s an important step, and there’s still much more work to be done. We’ll continue to test and explore new ways to help people feel comfortable in VR.”

The Titans love video games! Check out the very...

Summary:Grounded is a take on the survival genre where...