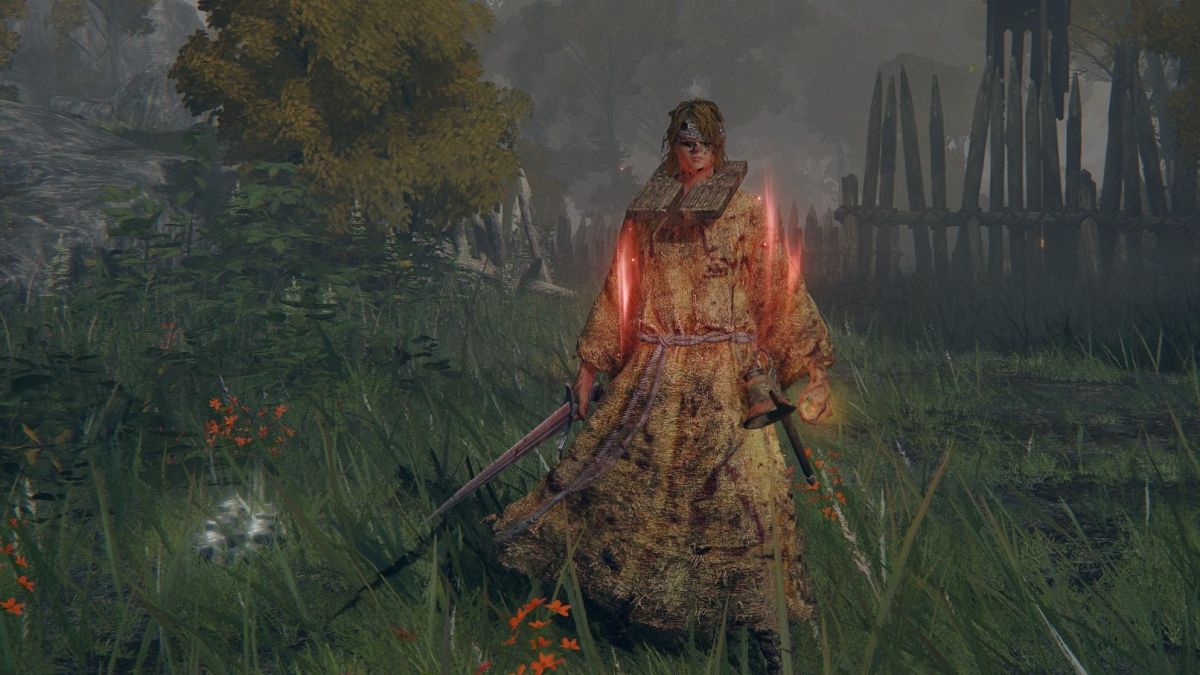 Tragically, I have returned to The Lands Between. After burning through every single possible loose end (and killing a lot of players underground), I put my main character to rest after 160 hours. I was ready to be done with the game.

Two months later, however, I felt the call of the Elden Ring once more. But figuring out an angle felt hard—I’ve never been one to theorycraft builds, and a New Game+ on old Mary of Psamathe soon wore out its wonder. Instead, I chose to return to The Lands Between with a chopping board on my neck, magic flames in my hand, and most importantly of all, absolutely zero desire to fell any of the realm’s Shardbearers.

Here’s the thing. Elden Ring is, by and large, pretty chill about letting you skip all the good bits. On that exhaustive first run, I ended up stumbling across the cliffside path that lets you skip Margit and Stormveil Castle entirely—and while I still ended up banging my head against big Marge back then, this time I opted to skip Elden Ring’s infamous gatekeeper entirely.

That freedom extends through much of Elden Ring’s early game. Caelid, that pus-filled hellscape just to the east of the tutorial zone, can pretty much be ignored entirely, as can the Weeping Peninsula to the map’s south. Raya Lucaria Academy, the home of second major Shardbearer Rennala, is equally skippable, so I made my merry way onwards to the Altus Plateau.

Now, there are two ways up to the autumnal forests of Altus. You can collect two halves of a fantasy medallion to activate a magic elevator, but doing so requires a bit of faffing around in dreary old forts. The much cooler, (not so) secret alternative is to climb an extremely precarious cliffside full of bats and siren-like Misbegotten, culminating in the roost of a giant Magma Wyrm (read: dragon).

In a game full of catacomb, mine and dungeon bosses who feel placed there out of vague necessity, it’s an incredible sequence. That I was grossly underleveled for this spot only made it more exciting—sending me off looking for lightning spells to take on the great beast, knowing only one hit would kill me outright.

It was only when I reached the gates of Leyndell, Royal Capital that FromSoft put the brakes on. You can ride straight past the Tree Sentinels that block the door into the outskirts. You could even kill the Draconic Tree Sentinel that bars entry to the city proper. But the golden fog won’t lift until you’ve killed two Shardbearers, an arbitrary roadblock in a game that had largely been free of them until that moment.

Elden Ring doesn’t drop that craftiness entirely after Leyndell. There are more magic amulets leading to hidden regions with further areas hidden even deeper within (The Haligtree and the Consecrated Snowfields, for example). There are still spaces to sneak into, an entire underground to explore and a city I might break into through exploits and attrition. Leyndell is where Elden Ring pivots from one kind of open world to a different, more deliberately directed one that’s harsher to players trying to sneak on by.

In an attempt to keep the ball rolling, I’ve been trying less ‘legitimate’ means of entry. There are speedrunning techniques like wrong warps, of course, but in an attempt to stay vaguely in the spirit of things I’ve been trying a skip (opens in new tab) that at least somewhat sticks to the game’s sandbox—using a teleporter trap to reach a dead-end tower and then attempting to cancel out fall damage with a perfectly timed explosive flask.

Venturing the world to find the items to set up this skip feels just as crafty as finding those wyrm-slaying spells, forcing me into fights against Erdtree Avatars who can kill my Vigor-less sword-priest with a glance. The skip itself, at time of writing, continues to elude me.

But the ordeal’s gotten me thinking about what works best about Elden Ring. It’s not the bosses, which are firmly average-at-best in the From Software pantheon and number in the hundreds. It’s not even really the combat, which is fairly traditional in the Dark Souls mold with a few extra verbs (jumping, spirit ashes, etc). It’s this absolute freeform nature, one that lets even the grandest spectacle feel like something you discovered on your own terms.

Yes, most players will end up going through Stormveil and Raya Lucaria because they’re presented as being on the critical path. But they’re also going through those spots because a massive castle and a towering wizard school are cool places to explore (or ignore) at your own peril.

It’s easy to imagine a version of Leyndell that continues the path early Elden Ring lays down—skulking into the city through its many sewers, or along precarious crumbling fortifications, punctuated with minor bosses like Altus’ magma wyrm. A continuation of the idea that The Lands Between don’t just belong to strong warriors and powerful wizards, but crafty rats finding new ways to scurry through the world.

I started this playthrough to see how far I could go without fighting any major bosses, and I guess this whole piece is just to say that it’s disappointing that one of Elden Ring’s most spectacular areas is also its most arbitrarily gated. But there’s still a good deal further I can take this plucky little rat. It’ll just take a little bit more cunning to get there.

Uncharted 3 Drake's Deception Walkthrough Part 1 and until the last part will include the full Uncharted 3...
PC

Tragically, I have returned to The Lands Between. After burning through every single possible loose end (and killing...
Nintendo

The COVID-19 pandemic has wreaked havoc on in-person events for a couple of years now. Although infection numbers...

Fall Guys recently went free-to-play, and while this meant...

Without the support of the masses, lots of incredible...

Yostar published a full schedule for the Azur Lane...

In the nostalgia-soaked, 90s-inspired world of Justice Sucks, you...