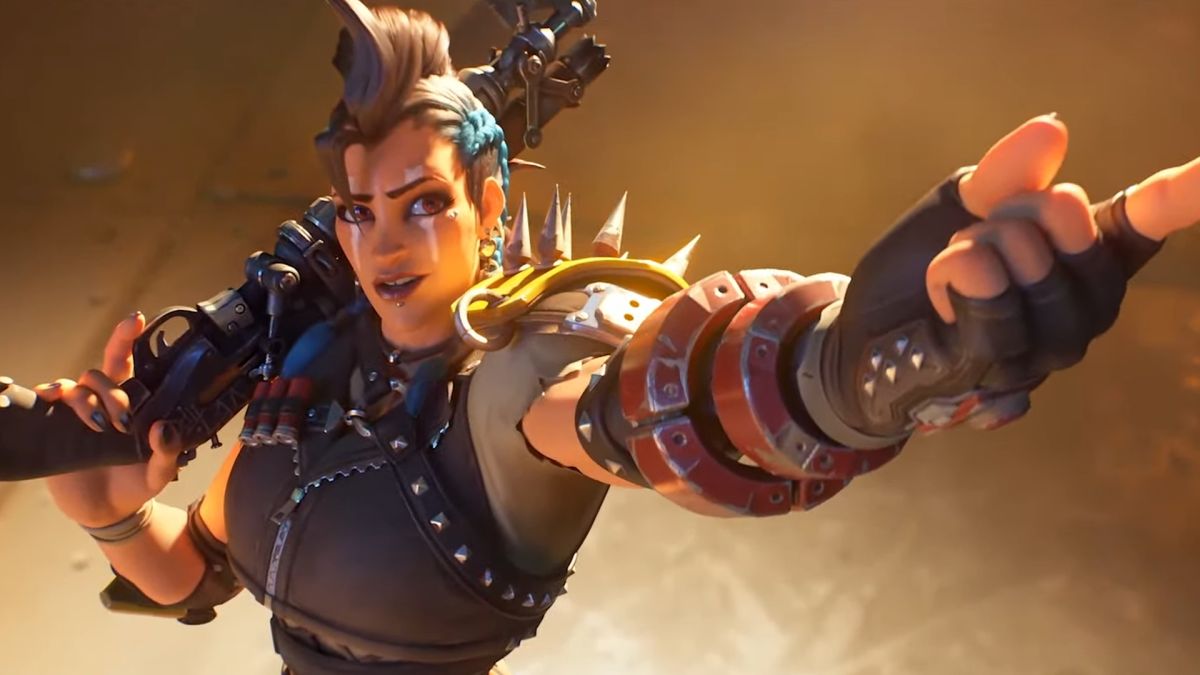 The best Overwatch heroes are one-trick wonders. Mechanics and personality are all carefully crafted to push them into performing a single role with extreme confidence, whether that’s Reinhardt’s fortress protecting the team or the venomous push-and-pull of Moira’s vampiric healing.

The same cannot really be said for Overwatch 2’s latest hero, Junker Queen (opens in new tab). After spending some time with the thunder from down under in OW2’s second beta, the chaotic tank feels shockingly unrefined, even for the punk queen of a Mad Max wasteland.

Let’s quickly run down Junker Queen’s abilities. Her primary fire is a shotgun, simple as. Her secondary, meanwhile, is a knife that can be thrown and pulled back to yank enemies towards her, but also acts as a faster melee attack on cooldown. Both of those functions also apply the “Wound” status effect, as does her E which deals a wounding slash to all enemies in front of her.

Junker Queen passively receives all wound damage back as healing, giving her incredible sustain. But her shift ability also gives her a massive surge of temporary health, plus a speed boost, for herself and nearby allies. Finally, her ultimate sees her surge forwards with a nasty battleaxe spin, not only wounding enemies caught in the carnage but denying healing on them for the duration of the wound.

You can see how this is supposed to play out, right? Junker Queen is a character meant to leap into the thick of it, constantly dealing damage to keep herself alive while slowly chipping away at the enemy team. In practice, she’s a weird balancing act of applying poorly-telegraphed status effects with abilities that all broadly do the same thing.

This isn’t to say she’s overpowered—a good team will easily outrange her and shut her down. But playing against her is confusing and chaotic, Overwatch 2’s lack of crowd control removes a lot of options for dealing with her. Unlike Roadhog or Soldier 76, her health boost is instant and gives no option to punish, leading to dozens of situations where a Junker Queen you think you’ve dealt with suddenly comes roaring back full blast.

Playing as her, however, doesn’t feel much better.

Playing as Junker Queen is a weirdly diluted experience. In many ways she’s Roadhog-adjacent—high sustain, close quarters carnage with the ability to pull in foes and self-heal. But what Roadhog does with only a handful of skills takes JQ a full spreadsheet, relying on status effects and chained abilities to do what ‘Hog does with a hook and a flask.

Junker Queen looks like a World of Warcraft warrior, so why not lean all the way in?

In streaming the OW2 beta with seasoned Blizzard journalist Nico Deyo, we floated the idea of what Junker Queen would look like as a purely melee character—one where her primary is that giant axe, where she’s fully driven to get in the thick of it by necessity, sustaining herself with axe swings.

Overwatch has melee-only characters like Brigitte, Doomfist and Reinhardt, too. The act of giving her a gun, however, has shunted all her up-close-and-personal tools to abilities on the side. Junker Queen looks like a World of Warcraft warrior, and comes close enough to playing as one already—so why not lean all the way in?

The other issue is that, despite being designed for Overwatch 2, Junker Queen fits neatly into the off-tank role OW2 so handily abandoned in its jump to 5v5 (opens in new tab). She stands alongside D.Va and Roadhog, heroes who are more focussed on being terrifying distractions than team protectors, and now need to uncomfortably contort themselves into a main tank role.

The best Overwatch heroes do one thing, and they do one thing perfectly, combining to create a multifaceted team of precise individuals. OW2 hasn’t entirely forgotten that model—Sojourn, for example, is entirely defined by her gun and her gun alone. But in Junker Queen, I see a design that feels afraid of commitment, of leaning all the way into the power fantasy of being a no-frills wasteland warlord jumping into the fray.

Junker Queen comes so close to that fantasy. But if she’s going to become a truly great Overwatch hero, Blizzard is going to need to cut through the chaff and narrow down on what makes this axe-wielding warlord really tick.

The best Overwatch heroes are one-trick wonders. Mechanics and personality are all carefully crafted to push them into...
Nintendo

Subscribe to Nintendo Life on YouTube It's absolutely packed out with game releases and announcements this month, and...
News

Sony Group has published an obituary for Nobuyuki Idei. The former company group CEO and chairman died on...

Here we are folks! Experience a real gameplay of...

A strange mist known as the...

As Dusk Falls is an original interactive drama...

Check Out the Newest EA Play Member Rewards for Xbox

Sony’s official announcement of the long-rumored The Last of...