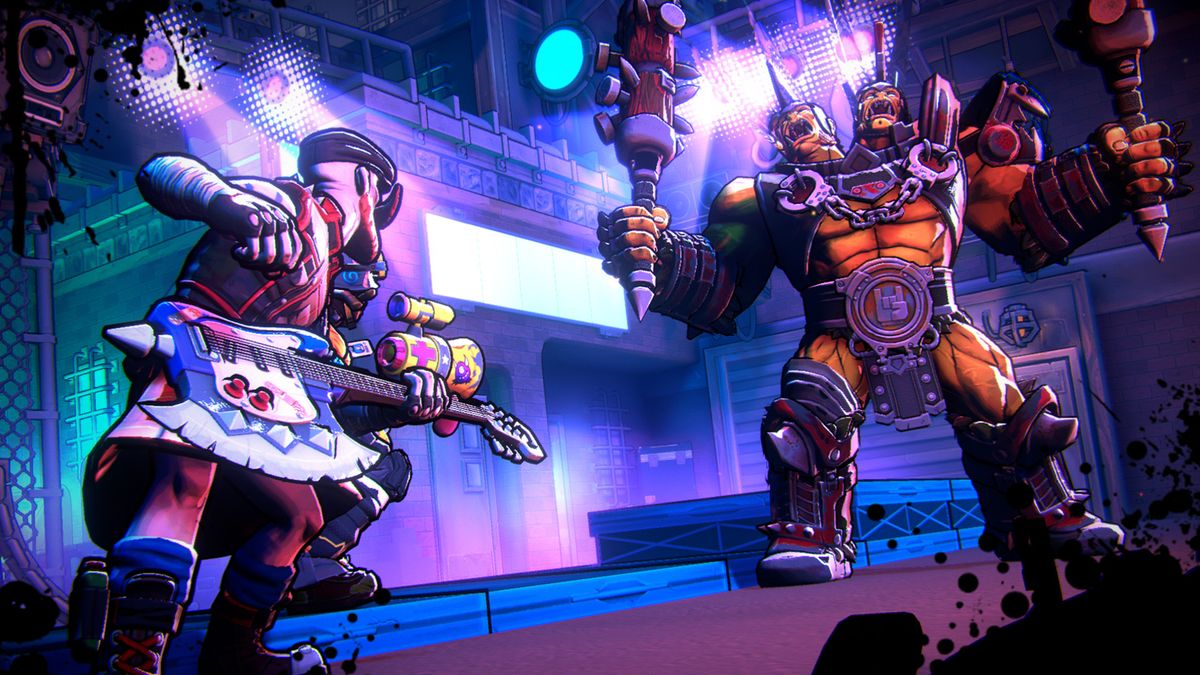 Do lead guitarists have rage problems, as a general rule? Maybe it’s an ego thing, or maybe it’s exclusive to guitarists who find themselves using their guitars as battle axes against legions of demons. Either way, I’m not complaining: stacking rage charges on a guitarist in Power Chord, an upcoming roguelike deckbuilder, turned out to be the fastest way to multiply my melee damage in this bizarre death battle of the bands.

Power Chord isn’t shying away from its debt to Slay the Spire (opens in new tab): its map screen is practically an identical sequence of branching paths leading to battles, treasures and mystery encounters. The broad strokes are the same, but the way Power Chord uses its cards is pretty different than Slay the Spire or Monster Train (opens in new tab), the second most popular game in this popular genre. In Slay the Spire your whole deck is devoted to a single character, while in Monster Train your deck includes a mix of creature cards and spells. In Power Chord, your team of four—aka band—is always on the field, and your deck is composed of color-coded cards unique to each bandmate.

This means red cards only apply to your guitarist, who in my demo specialized in building up multiplicative damage for big hits. The drummer’s blue cards were more about building up armor to tank damage.

These sorts of deckbuilders always demand careful consideration of the order you play spells and manage buffs, but it’s especially true in Power Chord. Once or twice I juiced up my guitarist to prepare for a big hit, then realized I didn’t actually have any red attack cards for him to shred with.

I didn’t play enough of Power Chord to dig into its deckbuilding or the meta unlocks that will happen between runs, granting you access to new cards for each class (instrument?). But I like that it’ll force me to think about how to best optimize four unique sets of cards in a single deck, unlike focusing on a single style or gimmick in Slay the Spire.

As with Monster Train’s mix-and-match demon races, Power Chord will have customizable teams, with more than one selectable drummer, guitarist, bassist, and singer available at launch. Each band role fits into a rough role, but one tanky drummer may be more geared towards offense than protecting the team. You can also slap gear onto them to further differentiate them, which makes Power Chord seem poised to keep runs quite varied over time.

I did find Power Chord’s aesthetic just a bit too visually busy, with a lot of icons to keep track of for which character was taking what damage and who had such-and-such debuffs. There’s an inevitable iconographic learning curve for any deckbuilder, but Power Chord’s is maybe a tad steeper considering how many characters are on screen at once. But the color system is quite effective at making the most important information easy to grasp—it’s a great bit of design.

Power Chord’s aiming to be out later this year, but what I played already felt really polished—of course with only a demo’s worth of finished cards and classes. It already feels like a game destined to be great on the Steam Deck, though I gotta say: if this launches without a Tenacious D song on the soundtrack, it’ll be a low key rock travesty.

You can play the demo of Power Chord yourself on Steam (opens in new tab).

Players are questioning how microtransactions in the new Gran...

Be the monsters in Slay the Spire fan expansion Downfall,

In the works for a few years now Slay...