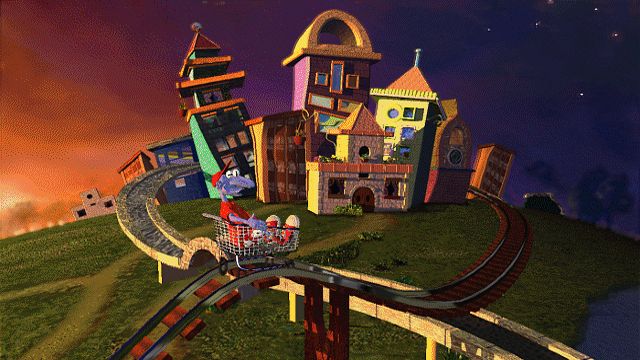 Back in the mid-’90s, I spent many long afternoons animating car crashes and alien abductions in 3D Movie Maker. It was one of Microsoft’s best bits of software at the time, and it’s the first instance I can recall of real-time 3D rendering being presented to me as a creative tool (though I might’ve messed around with Doom mapping, too).

There was an idea back in the ’90s that modern software should map its functions onto the most obvious metaphors possible. In Microsoft Bob, for instance, programs were organized into the rooms of a house. PC Gamer’s ’90s demo discs similarly featured adventure game-style interfaces. These virtual spaces couldn’t have boring old tutorials—Turing and Asimov promised artificial intelligence, not tooltips—so they were augmented with chatty characters such as a cartoon dog, our own Coconut Monkey, and the infamous Clippy from Microsoft Office. 3D Movie Maker had a guide, too, but since it was for kids and this was the ’90s, he was a horrible blue guy with goat pupils that ran perpendicular to each other. He was a real nightmare, McZee.

The models were clearly influenced by American cartoons of the time, such as Rugrats and Rocko’s Modern Life, and that was good enough for ten-year-old me

McZee’s antics—riding a shopping cart down roller coaster tracks, turning into a slice of cheesecake—illustrate why the ’90s holds such a monopoly on the words ‘wacky’ and ‘zany’. He guided users around a movie studio, finally leading to the interface where you could make your own movies with props and characters as garish as he was. The models were clearly influenced by American cartoons of the time, such as Rugrats and Rocko’s Modern Life, and that was good enough for ten-year-old me. (A Nickelodeon-themed version of the software released in 1996, too.)

If I knew nothing about 3D Movie Maker and you asked me to imagine what a 3D animation program for kids might have been like in 1995, I’d probably assume that it was a proto-Garry’s Mod disaster with impossible controls. On the contrary, this was a brilliant piece of software. It simplified 3D animation in such a way that kids could create surprisingly sophisticated scenes. You could even record your own audio if you had a microphone.

To animate a character walking, you would add the character to the scene, select the walking action, and then click and drag them along the floor to record a path. You could then scrub back to the start of the scene and do the same to another character or prop, layering the movie with animations. It was in 3D Movie Maker that I first got a sense of what a digital animation and video editing timeline was, which I’d carry into the embarrassingly bad games I made with Adobe Flash, the software used for so much vector animation in the late ’90s and 2000s.

Once you made a video in 3D Movie Maker, there wasn’t much to do with it other than show your family and friends. It was a toy, more or less, but also a peek at the future. At the time, we were still crudely editing home movies with dual-deck VCRs (MiniDV was a new format), but it was becoming clear that personal computers were one day going to put amateur creators—filmmakers, animators, musicians, game designers—on the same playing field as professionals. 3D Movie Maker wasn’t a game itself, per se, but it was a vision of entertainment software as a creative tool, as opposed to a one-way fun pipe, and that is a very PC gaming notion.