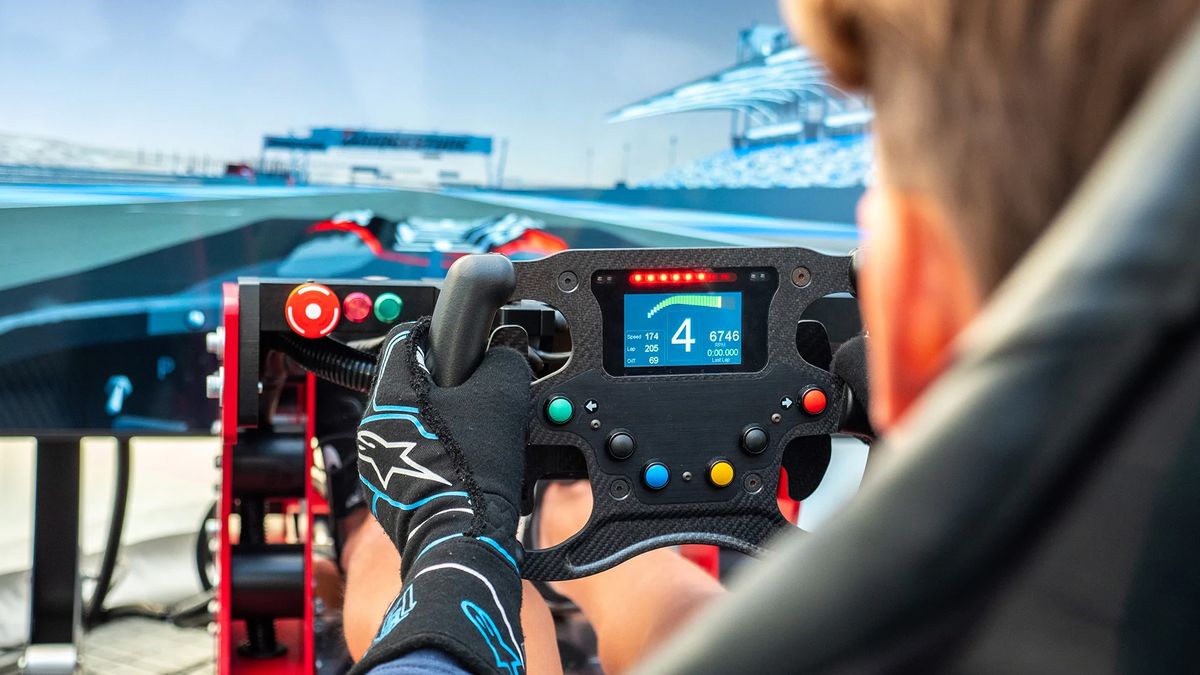 Not so long ago, just having a steering wheel peripheral basically made you a racing game pro. And if that wheel had force feedback? Watch out, online racing game lobbies. Mario Andretti just showed up.

2022’s standard for sim racing equipment is somewhat more evolved. In the last few years, sim racing esports have surged in popularity, and prominent young F1 stars now stream themselves playing in their rigs. If you’re not sitting in a carbon fiber monocoque, holding a direct drive wheel worth more than most used cars, watching three 50-inch panels project the latest F1 game, do you even race?

Notable setups include that of Australian YouTuber Boosted Media (opens in new tab), whose enormous triple screen display and headcam make it genuinely difficult to tell that you’re not watching a real race from inside a cockpit. The whole thing cost over $69,000 USD, and features three 65-inch 4K panels fitted into a custom framework and a sled on a hydraulic motion platform. Let’s not even get into how you’d achieve a stable framerate at 12K.

Archie Hamilton’s Vesaro rig (opens in new tab) also features a motion platform and triple screen output. These setups are great to watch on YouTube—not to mention tremendous fun to drive—but they don’t actually look much like the sim rigs we see in F1 drivers’ homes when they stream themselves on Twitch.

Lando Norris, Charles Leclerc, and Max Verstappen, the new generation of talent in motorsport’s most exclusive category, tend to use static sleds. The triple-screen setups are still there, and the wheel and pedal hardware’s of the highest quality, but there’s no bouncing around on hydraulic pistons.

There’s one thing all these setups have in common, though: They’re all absolute overkill for the demands of most sim racers.

That was certainly the case for Cool Performance (opens in new tab). The company’s head of global operations, Connor Hughes, tells me it sold out of six months’ worth of stock within the first month of the UK lockdown: “It was crazy.”

Cool Performance, and hardware design partner Pro Sim, make serious simulator setups. Founded by two former racers Hughes and Oliver Norris (brother of current McLaren driver Lando), the company’s objective was to build rigs that might actually save racing drivers money in the long term. Rather than travel across Europe to their contracted team’s HQ and log hours in the simulator there, why not have a custom simulator built in your own home, accessible day and night with no transport cost?

It’s a solution to a problem Norris saw firsthand as his brother Lando competed in Europe, according to Hughes.

“When you’re racing, you’re done on Sunday, flying back Sunday night, then Wednesday you’ve got to be back at the track,” he said. “That’s why Lando was one of the first to have the sim, basically just to cut that time in between. When he was at home for, let’s say, one day, he was able to train, go downstairs, eat lunch, come back up to go straight on the sim, rather than having to go across Europe for it.”

These aren’t cheap setups. A basic “E-Sport Gaming Simulator” costs £14,250 (approximately $17,000 USD). Some of the pro simulators cost £24,445 or more. But given that a season of single-seater racing like Formula Renault costs more than £200,000 a year, excluding private testing and transport costs, if you’re competing in that world already, you probably have some capital at your disposal. Plus, sim time at home even in a state of the art rig like Cool Performance’s might be cheaper than flying out to get more track time outside of races.

“In Formula 4 maybe you can’t afford to go and drive 50 test days,” says Hughes. “Realistically, you’re going to be spending £5,000-£10,000 a day going testing, and it adds up very quickly. So a driver might make that investment in a simulator instead.”

Everything about Cool Performance is designed for racers who are competing in various motorsport categories and need the most realistic sim setup possible to aid their real-world performance. And yet, as Hughes tells me, half of the company’s customers are “just wealthy individuals who want something like Carlos Sainz and Mick Schumacher train on at home, in their downtime.”

These are enthusiasts and gamers who aren’t honing a skill to be applied to the track later. They’re not competing in esports competitions. They’re racing for its own sake, for the intrinsic enjoyment, and they don’t need $60,000 custom sim rigs any more than a CS:GO player needs army issue body armor.

They probably didn’t make such a financial investment purely because they were in lockdown at the time, either. Like every other face of PC gaming, the culture of sim racing has become about indulging in one’s pastime—creating and fine-tuning a space devoted to the activity—perhaps even more than actually participating in that activity.

Streaming has placed newfound importance on the look of our gaming space, and that has particularly affected sim racing thanks to the blurring line between racing superstars and sim racing streamers. So many of the current F1 grid have streamed themselves casually playing the latest Codemasters F1 game or racing each other in ACC that the image of a steering wheel peripheral, and even a sim rig, has shifted from racing hobbyist equipment to aspirational gear—a status symbol like microphones, but a lot more expensive.

As expensive as they are, sim rigs do arguably lower the barrier to entry for future racing athletes. The upper echelons of racing, particularly F1, have long faced criticism that the drivers who make it there are the ones with not just talent but vast amounts of financial backing to open doors, too. With such huge money needed to reach an F1 drive, can we be certain these are really the best drivers in the world?

Sim racing offers a different route up through the ranks. Where the journey might once have begun with karting—which for many is prohibitively expensive even at junior level—young would-be drivers can now get huge amounts of virtual track time without having to travel around the country and explain to their teachers why they’re only attending three days a week. It’s hard to imagine sim racing becoming a total substitute for track time, and only being in a car can prepare you for the agonising neck strain the G-forces impose on you, but if young drivers whose families have slightly less to spend than Nikita Mazepin’s can supplement their time on track with meaningful practice in a rig, maybe the barrier for entry lowers just slightly.

We ended up gluing two seats together, effectively. Me and you could have probably sat in that seat together.

Accessibility is another interesting facet of the high-end racing rig scene. It’s accessible to very few from a financial perspective, but all of Cool Performance’s rigs are custom orders, so building a rig without pedals or with specific button layouts is well within the company’s scope.

“We build it all ourselves,” says Hughes. “So yeah, anything can be done. We built a sim for Billy Monger, who lost his legs in F4. He’s got one of our sims, adapted for him. We can do things like a hand throttle and brake on the steering wheel. We can provide custom seats.”

One such project was for a seven-foot NBA player, who struggled in traditional sleds due to their size.

“We ended up gluing two seats together, effectively,” Hughes said. “Me and you could have probably sat in that seat together. It was pretty cool to see.”

This gear isn’t for everyone, clearly. Most of us don’t need or can’t afford custom-built rigs, and even a Playseat with an entry-level force feedback wheel is an extravagance rather than a necessity for setting fast lap times. But the sim rig is becoming an increasingly mainstream sight for racers, streamers, and gamers who have a passion for racing and a bank account balance with lots of digits.

Not so long ago, just having a steering wheel peripheral basically made you a racing game pro. And...
Nintendo

Image: Nintendo Life / GemmaAs someone who gets paid to have opinions about video games, I have to...
News

15 Most Brutal Video Game Moments You Witnessed In First

The first-person perspective is perhaps one of the most...

Looking Back to 2007 and the Xbox release of Guitar

Ahhhh the days of gaming...