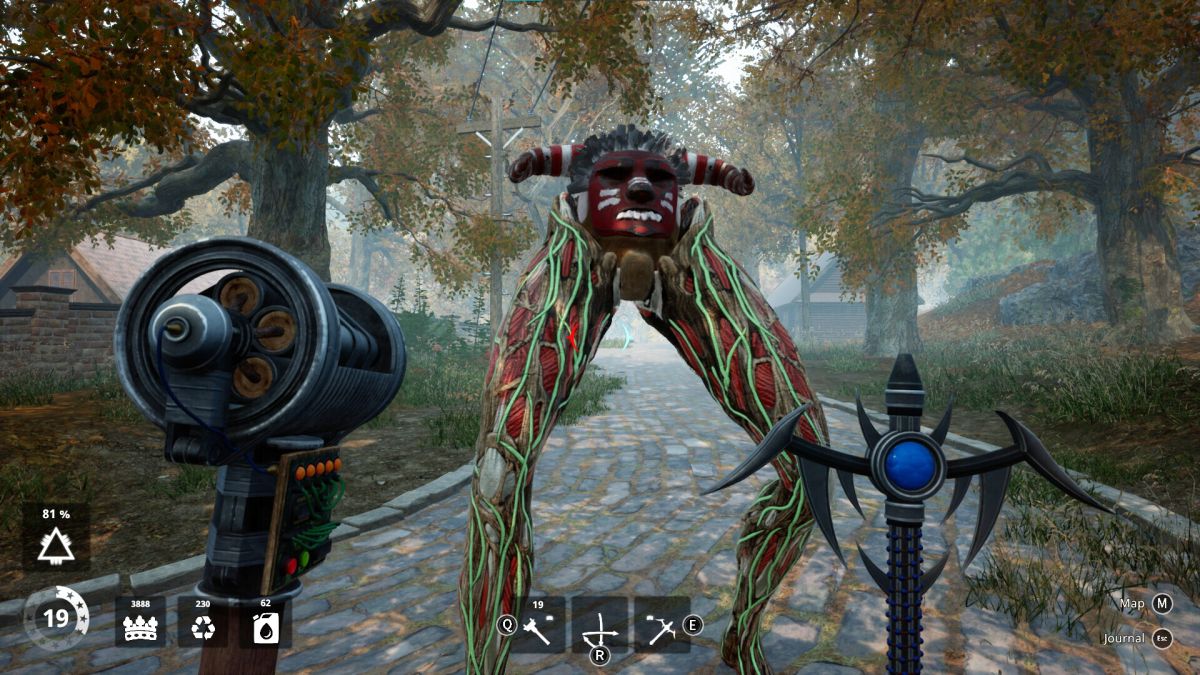 I’m not sure what I really expected from a game called Priest Simulator. Maybe you’d listen to someone’s confession and choose from a drop down list of penances to assign to the sinner? Or you’d officiate a wedding via a minigame where you have to pick the right verses and get the bride and groom’s names right? Maybe rotating a thumbstick to swing that… that brass thing, whatever it is, on a chain, the thing that… like, smoke or steam or incense comes out of it?

Sorry, I was not raised with religion, haven’t pursued it as an adult, and the last time I was inside a church it was with Father Grigori in Half-Life 2. But even as uninformed as I am, when I imagine a simulation game you play as a priest, it’s not anything like what I see in the trailer for Priest Simulator. It begins with a scary voice loudly declaring “Hell is my playground!” before the priest, in first-person, begins wildly punching the air and sending fireballs into some sort of giant spider perched atop the ruins of a city.

More highlights: A bus is picked up and thrown through the roof of a building, though I am not certain if the priest is responsible or just a witness. There’s more punching, this time of either a demon or someone just wearing a demon mascot head. Metal music blasts throughout.

Then, at least, we see a confession. At last! Real priest stuff. “I don’t see any point in my family,” a wide-eyed (perhaps eyelidless) woman is saying, no doubt echoing a thought most of us have had at one time or another. “Honor thy father and thy mother,” the priest selects from various options, before receiving what appears to be a total of 7 Priest Points (?) for making the right choice.

When we next see the priest he has a blade strapped to the back of one hand and a large hammer in the other and is brutally killing a bunch of people or monsters, first in the woods and then a graveyard. He drives a car, he chugs wine, he buys a sack of holy communion concentrate. There’s a lot going on and little of it fits my admittedly poor knowledge of things a priest does.

According to the developer, Asmodev, Priest Simulator is an “action mockumentary” that will introduce you to “the fantastic world of modern Poland.” I honestly can’t begin to speculate on the veracity of that statement, though one reviewer says “I’m Polish and can confirm this is 100% realistic polish priest simulator.” I also cannot verify that statement, and will make absolutely no effort to do so.

The game (it’s out today on Steam) stars a “vampire priest who wants to get his baton back and return to Hell. To that end, you must fight shatanistic hordes, beef up, renovate the church, and gather splendor.” You can also dual wield the game’s 8 weapons, which both doesn’t feel like enough weapons but at the same time feels like 8 weapons too many for a priest.

Priest Simulator is in early access and plans to add more stuff over the next 4-8 months, including new quests and music. Currently there are 27 reviews on Steam, all of them positive. Amen.

I'm not sure what I really expected from a game called Priest Simulator. Maybe you'd listen to someone's...
Nintendo

A Project U leak revealing an Ubisoft video that...

“I’ve got blisters on my fingers!” Taiko no Tatsujin:...

We reported on upcoming platformer Inukari a few weeks...

The Spookiest Levels In Non-Spooky Games