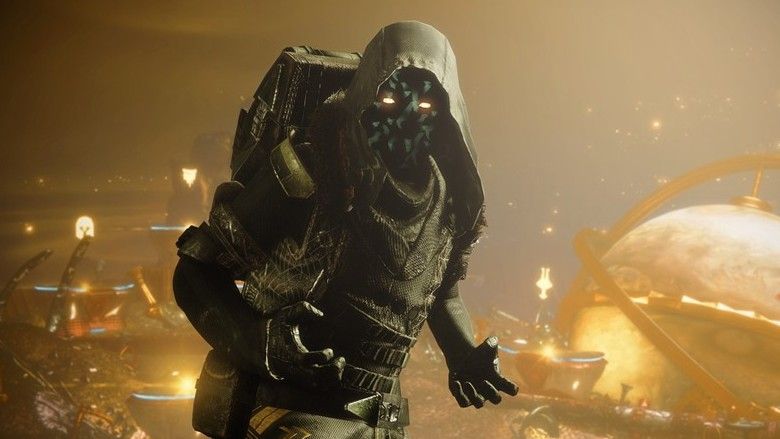 Oh, happy day! Xur is back and he’s no longer bugged. That mean’s the armor he sells is once again rolling with correct stat distribution, although with the slight caveat from Bungie that the: “fix has caused an issue… where the advertised stats on Xûr’s inventory screen may be slightly different than the item you receive.” Oh Xur!

This week, he can be found in the Winding Cove area in the EDZ. Head straight forward from spawn and he’s lurking up the cliffs on the right by the crashed ship. If in doubt, look for a clump of player names also paying him a visit.

Head for where I’ve placed the mouse arrow on the right-hand side of this map. (Image credit: Bungie)

Xur arrives at 1:00 PM EST / 9.00 AM PDT / 17.00 PM GMT, and leaves when the game resets the following Tuesday. This week’s wares can be found below, along with my recommendations. Provided you have the shards to spare, I advise picking up any exotic you don’t already have so it’s added to your potential loot pool for future drops.

Gloves for everyone this week. Hey, at least the stats aren’t borked this time. (Image credit: Bungie)

Hunter exotic gauntlets
Mobility: +3
Resilience: +7
Recovery: +20
Discipline: +6
Intellect: +17
Strength: +10
Total: 63
Exotic perk: “You specialize in punishing powerful combatants before they can harm your allies.”
Recommendation: The Aeon gauntlets (each class has its own version) have gone from being an ignored meme to the meta in Grandmaster Nightfalls. You can spec them out in three different ways, but by far the most popular is Sect of Insight, which generates power ammo for your allies when you finish champions. This season, that effect doubles with the Lucent Finisher from the artifact, resulting in double purple brick drops. Aside from the lack of mobility, not a bad stat spread either.

Warlock exotic gloves
Mobility: +8
Resilience: +21
Recovery: +3
Discipline: +8
Intellect: +9
Strength: +12
Total: 61
Exotic perk: “Resist incoming damage while charging your Void grenade. Charged Void grenades return grenade energy on a hit.”
Recommendation: Despite having a very powerful effect—you’ll feel like a pyromaniac on crack as you sling solar ‘nades everywhere—Sunbracers tend to see play in lower end content where it’s easier to get off melee kills. Try them in the Strike playlist when the Brawler modifier is active and watch the world burn. Shame there’s so much resilience in the stat spread.

Titan exotic boots
Mobility: +25
Resilience: +8
Recovery: +2
Discipline: +2
Intellect: +6
Strength: +23
Total: 66
Exotic perk: “Move faster while guarding when Sentinel Shield is active. Guarded damage converts to Super energy when the Super ends.”
Recommendation: Another exotic that’s best suited to endgame activities such as raids and Grandmaster Nightfalls, because it benefits from taking a lot of incoming fire. The Ursa gauntlets grant greater uptime for your Banner Shield super, which now grants a 40% damage buff to allies firing through it, enabling your team to stay alive during risky DPS phases.

Each week, Xur brings a range of armor that’s no longer acquirable in-game. Perfect for transmog purposes, as we all know that creating killer fits is the true endgame. These are also now rolling with correct stat distributions—which doesn’t mean to say they’re all good, but there’s at least a chance!

This week’s set is the Anti-Extinction gear from the now defunct Dead Orbit faction. Decent for edgelord monochromatic fits. In terms of stats, each class has a good chest piece and the titan boots are worth a look too.

He also has a grab bag of weapons for sale, which thanks to his random nature can occasionally include a god roll perk combo. Both the guns and the armor cost 50 Legendary Shards and 1,000 glimmer per purchase.  It’s slim pickings this week. The Frozen Orbit might be okay in PvP as a super killer, thanks to Vorpal Weapon, and Osmosis on the Dire Promise can be fun with Void 3.0 Volatile Rounds builds, but honestly nothing jumps out.

Finally, squidface sells a randomly rolled version of Dead Man’s Tale and Hawkmoon (i.e. some of the perks change each week), which can be found on the second tab of his inventory.

These weapons were previously only obtainable via their own secret missions, which have since been sunset. Their cost is punitively high at 125k glimmer, 200 Legendary Shards, 1 Ascendant Shard and an Exotic Cipher. However, they’re both great weapons, so if you didn’t snag either when they were available, or Xur is selling a better roll than the one you have, it’s still worth ponying up.

Exotic 140 RPM kinetic hand cannon
Barrel: Chambered Compensator
Magazine: Alloy Magazine
Perk: Quickdraw
Grip: Heavy Grip
Exotic Perk: “Final blows and precision hits with Hawkmoon grant stacks of Paracausal Charge. The final round in the magazine deals bonus damage based on the number of stacks. Stowing Hawkmoon on the final round removes this bonus.”
Recommendation: Not a hugely inspiring roll on this, either. Quickdraw isn’t the perk it once was, and Chambered Compensator and Heavy Grip both hurt handling. Wait for something saucier.

Before you go, don’t forget to pick up the Exotic Cipher quest if you don’t already have it. It’s free, and will enable you to earn a random exotic just for completing a set amount of playlist activities.  See you next week, for more mild disappointment.

From the makers of Push Me Pull You comes...

We played the new MXGP - The Official Motocross...