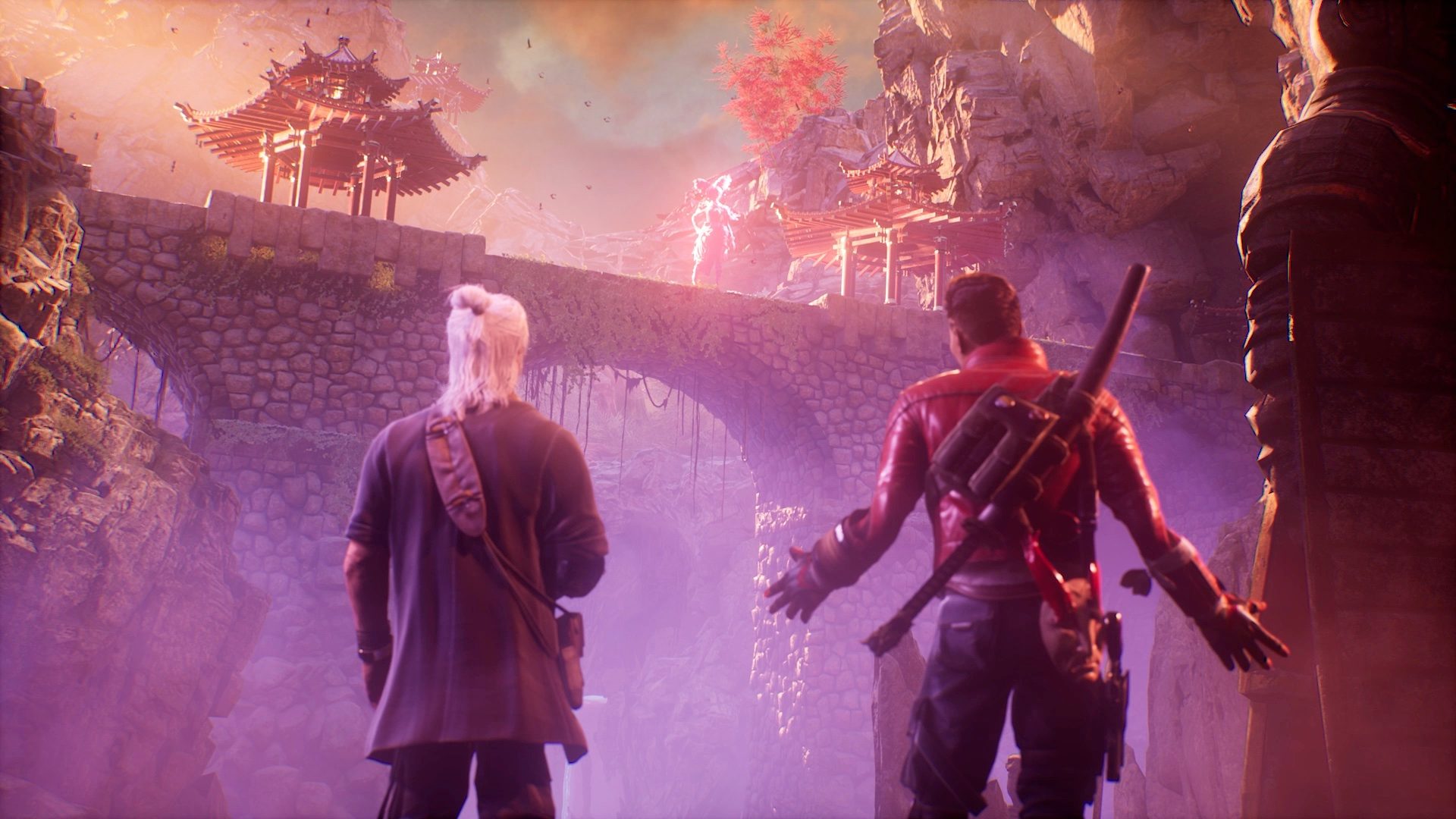 The katanas are sharpened and the dragon hunt is about to begin! I’m Bartek, the lead producer on Shadow Warrior 3, and our team here at Flying Wild Hog are excited to give you all a fresh look at our game before it launches on March 1. Stay tuned though because this post is getting a few updates throughout the day, with more videos to dive a little deeper into the game. Oh, and one more thing – Shadow Warrior 3 will be a PlayStation Now title at launch.

The first thing we want to share is an extended look at a new mission from Shadow Warrior 3 – the Dragon’s Nest! Our hero and his chatty companion are on the hunt for the dragon that was accidentally let into our dimension at the end of the last game and, more specifically, one of its eggs that can be weaponized to defeat it. The Dragon’s Nest is a beautiful, bright landscape that has seen better days since the dragon made its home there and wrecked the few bridges, buildings, and temples that remain. It’s a good mission to showcase the creativity in combat and movement alongside the new Gore Weapons players gain from activating finishers that we think make Shadow Warrior 3 a thrill.

The Shadow Warrior series has always leaned into the concept that a melee weapon like our katana shouldn’t be thought of as a last resort when you run out of ammo but rather a lethal option in the arsenal that makes players risk getting closer in order to land devastating blows on demons. The new game expands on that mechanic in a few ways including the ability to level up your katana to perform new attacks and creating a relationship between how you kill an enemy and the resources gained from each conquered monster. Striking down a demon with the katana will now yield ammo for your ranged weapons, while blasting them to bloody pieces drops health to patch yourself up and go in for more close-up combat. It’s a viciously fun cycle and we think it will keep players dancing between blades and bullets with each encounter.

The modern shooter scene has ramped up the action with the addition of executions, or ‘finishers’ at the end of hard fought battles. Shadow Warrior 3 takes that to another level by rewarding players with Gore Weapons, a feature where you literally separate enemies from their implanted tools of destruction and turn them against the horde for a limited time. Nearly every enemy in the game can be dispatched with a finisher to take a Gore Weapon or perk that players will learn to execute at the perfect moment for each situation.

So we know that every space marine and demon slayer has a grappling hook these days and that we’re not exactly breaking ground here. However, in Shadow Warrior 3 we think it adds a new dimension of freedom to combat and traversal by allowing players to pull out a few tricks to break free of a sticky situation or clear some room in a battle arena. The grapple hook will allow you to dart and swing around arenas, close the gap between yourself and a demonic target for a chest-caving kick, and cling questionably placed exploding barrels in just the right spot for an explosive result. Paired with a little fluid wall running and combat sliding, players will become masters of dancing around an arena in a creative display of force.

The Flying Wild Hog team has crafted Shadow Warrior 3 as the next evolution in our series to give more freedom to players in midst of the absolute chaos they create in combat. The dance between wielding the katana and letting loose with a shuriken launcher or railgun before executing an enemy to finish the fight with fireworks cannon is an absolute blast. Wall running, swinging over chasms, and bringing down a 2,000-year old bell tower on unsuspecting demons will keep the action up even more than ever before.

Now get ready to hunt that dragon!

Certain games featured on PlayStation Now may be made available in the library on a limited-time basis only. Games included in the subscription (and their features) are subject to change. Details: play.st/PSNow

It’s International Women’s Day, and to celebrate we decided...

Age of Empires IV in 2022 – introducing Seasons, an

Shortly after the release of Age...