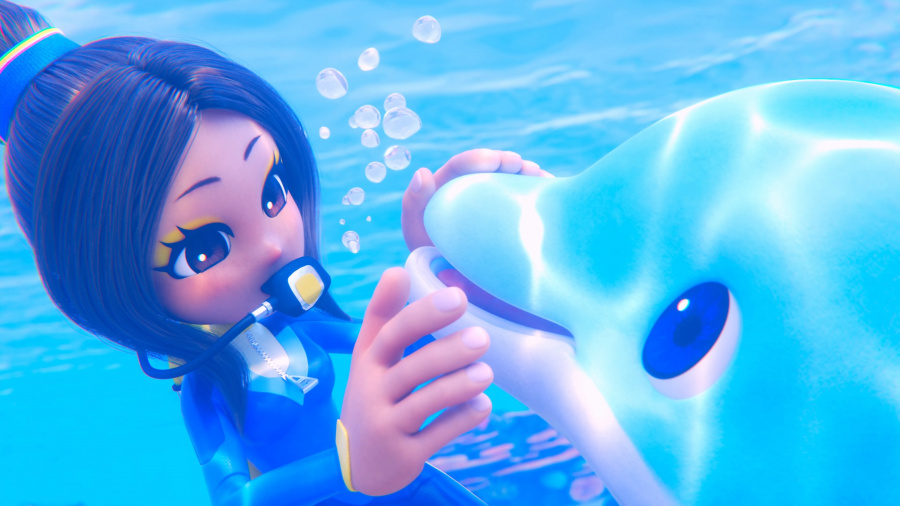 Gamers have been treated to a 3D platformer renaissance over the past few years. The likes of Yooka-Laylee and A Hat in Time have shown the world that 3D platformers aren’t just a genre of the past, but a formula that can still be iterated upon. Enter Square Enix and legendary game designer Yuji Naka, best known for his work on the Sonic the Hedgehog franchise. Together they set out to create a brand new 3D platformer like the world has never seen before. To that extent, they have succeeded, as the mediocrity of Balan Wonderworld stands out as one of the worst and underdeveloped platformers in recent memory.

From start to finish, Balan Wonderworld feels like a fever dream, and not in a good way. Nothing in this world makes sense, there’s no real story, and there’s nothing motivating you to keep going. The game stars Leo and Emma, two kids who feel like social outcasts, as they wander into a theater run by Balan, a mysterious being in a white hat known for his positivity. They are then transported to the Isle of Tims, a hub filled with adorable creatures that connects each of the twelve worlds. Each world is actually a troubled person’s heart, which Leo and Emma need to free from Lance, Balan’s evil counterpart. While the plot attempts some dark tones, there is little actual story outside of the opening and ending cutscenes. There is no dialogue between the inhabitants of this world, no character development, and no raised stakes to keep the player motivated. Brief interactions, such as the musical number at the end of each world attempts to add some personality to the characters, but they end up feeling as soulless as the rest of the game.

As lacklustre as the story is, the controls are easily the worst part of Balan Wonderworld. Unlike Mario and Crash Bandicoot, who have evolved their gameplay styles over the years, Balan feels as if it is a long lost PS1 game, and not in a good way. Much like the original Sonic the Hedgehog, the game only utilizes only one button. Whether you press any of the face buttons or use the adaptive triggers, every input will result in the same action. In theory, this is not necessarily a bad design philosophy, especially if you are catering the game to a younger crowd. Unfortunately, the game’s signature feature, costumes, meshes with the controls like water and oil.

There are 80 unique costumes throughout the game that give Leo and Emma different powers. These can range from the power to float in the air to shooting tornadoes as a projectile. On their own, these costumes present some great ideas to spice up the gameplay. However, since your costume’s abilities are activated with the same button that you would normally use to jump, and all buttons do the same action, this causes you to lose the ability to jump in certain costumes. If the game was built around this limitation of not being able to jump at all times, this may not have been such a huge issue, but since this is a platformer, losing the ability to jump can be the most frustrating feeling. Combine that with the slow movement speed, and you’re left with one of the least fun controlling characters in a platformer.

The problems with the game’s design don’t end there, however, as the core level design in Balan Wonderworld is incredibly basic, blocky, and boring. Each world is divided into two acts followed by a boss fight. The goal of each stage is to utilize the different costumes available to reach the purple heart at the end of the stage, while collecting Tims, gems, and Balan Trophies along the way. Each level has two to three unique costumes to find, with each one being encased in a locked crystal. Before activating one, you will need to find and use a key. These are usually within a few meters of the crystal anyway, making their inclusion feel completely arbitrary. Once collected, you will gain access to the costume’s powers. You can hold three costumes at a time, including duplicates. All additional costumes are sent to the dressing room, which can be travelled to from any checkpoint. However, the decision to not make the costumes permanent upgrades ultimately hurts the game, as costumes also function as your health. If you take any damage, that costume and its respective power will disappear until you find it again in a stage. This is incredibly frustrating when the game wants you to bring costumes back to previous worlds to find hidden collectibles like Balan Trophies. If you get hit once, it’s back to the previous level to find the costume you lost, and that gets incredibly tedious.

One of the most baffling inclusions, however, is that Balan Trophies are required to progress the story. Every few worlds, the game will require a certain amount of Balan Trophies to progress, leading to lots of backtracking to get enough to move on. There are seven Balan Trophies hidden in each world. Six of them are hidden throughout the stage, some of them requiring costumes you won’t have acquired as of yet. The seventh trophy requires you to find the Balan’s Bout minigame in each stage and complete it with an excellent rank. Each time, the minigame consists of Balan smashing debris, with the player performing four quick time events. Since they are nearly the same every time, the minigame gets old very quickly. Having the Balan Trophies be required is the epitome of padding, and it brings the pace of the game to a crawl more than it already is.

That’s not to say all of Balan Wonderworld is a complete mess. In addition to some great costume ideas, such as the Dusk Butterfly, which lets you fly at night, the game also has a pretty decent soundtrack. While not all tracks are winners, and the game tends to repeat them quite often, the music is definitely the highlight here. Additionally, on PS5, the game supports the DualSense’s adaptive triggers and haptic feedback. Each costume has a different feeling, particularly when you use the adaptive triggers instead of the face buttons. This was a pleasant surprise, but using the face buttons was still far more comfortable than the extra effort needed to use the triggers for every action. The game also supports full co-op, but there is a weird quirk where players are magnetized together and controlled as one if they get too close to one another, turning the game into an incredibly frustrating experience in multiplayer.

Balan Wonderworld stands out as easily one of the worst 3D platformers in the past decade. There was no good reason for Square Enix and Yuji Naka to salvage this train wreck and it’s an embarrassment that this game was allowed to be released at all in its current state. When the game’s only redeeming qualities are some good music and neat DualSense features, something clearly went wrong here. There is no doubt that Balan Wonderworld should’ve remained locked up in the game design vault it was conceived in twenty years ago.

Mafia Definitive Edition Walkthrough Part 1 and until the...

The best gaming motherboards from the top Intel and...