This announcement is dedicated to everyone who loves games, loves reading about games, or those people who click on links about games – this one’s for you. We’ve got more coming to Xbox Game Pass and PC Game Pass soon; some are even available today! Whether you’re looking to squad up with your friends to take on a constantly evolving alien threat, become a world class assassin, or planning to brush up on your dog photography skills (we’ve seen them on Instagram!), we’ve got you covered. Let’s dig into the games!

Danganronpa: Trigger Happy Havoc Anniversary Edition (Cloud, Console, and PC)
Investigate murders, search for clues, and talk to your classmates to prepare for trial. There, you’ll engage in deadly wordplay, going back and forth with suspects. Dissect their statements and fire their words back at them to expose their lies!

Nobody Saves the World (Cloud, Console, and PC) [email protected]
Available on day one with Game Pass: When the ancient Calamity re-awakens, who can save the world? Nobody! (That’s you, you’re Nobody.) Master the art of transformation to become a Slug, Ghost, Dragon, and more. Combine your forms to create powerful hybrids and defeat the forces of evil. Join a friend for online co-op and save the world together! Plus, Ultimate members can play on mobile devices with touch controls with Xbox Cloud Gaming, no controller needed!

Death’s Door (Cloud, Console, and PC) [email protected] – January 20
Reaping souls of the dead and punching a clock might get monotonous, but it’s honest work for a Crow. The job gets lively when your assigned soul is stolen, and you must track down a desperate thief to a realm untouched by death – where creatures grow far past their expiry and overflow with greed and power. Ultimate members can play on mobile devices with Touch Controls with Xbox Cloud Gaming, no controller needed! Hitman Trilogy (Cloud, Console, and PC) [email protected] – January 20
Experience the World of Assassination trilogy and become Agent 47, a legendary assassin. Embark on a globetrotting adventure, where hyper-detailed missions are packed full of creative opportunities to take down your targets. Go loud with some serious firepower, steal a disguise, or play as a Silent Assassin. It’s all up to you. Pupperazzi (Cloud, Console, and PC) [email protected] – January 20
Available on day one with Game Pass: This dog photography game puts your love for pups to the test. As you take better photos, you’ll unlock new breeds, camera lenses, chew toys, and accessories to dress up dogs with. Don’t just pet and play fetch – save your memories of those very good boys and girls on film. Windjammers 2 (Cloud, Console, and PC) [email protected] – January 20
Available on day one with Game Pass: The best flying disc game of all time is back! With amazing hand-drawn graphics, crazy new moves, gameplay mechanics and awesome new characters and stages, Windjammers 2 is the sequel you’ve been dreaming of.

In Case You Missed It

Spelunky 2 (Cloud) [email protected] – Available now
This challenging roguelike platformer offers you immense freedom to carve your own path through its randomly-generated caves and ruins. Exercise your creativity and through your actions, tell a unique story each time you play. Uncover the secrets alone or with friends! Learn more about the game here.

The Anacrusis (Game Preview)(Cloud) [email protected] – Available now
The Anacrusis is a four-player, cooperative first-person shooter set aboard a massive starship stranded at the edge of explored space. Team up with your friends in an infinitely-replayable fight against alien hordes to unlock perks, weapons, and new ways to play that you can share with your team! Learn more here.

We hear you like Halo Perks, so we’re going to give you more Halo Infinite Multiplayer Perks.  Check out these brand-new Perk offers below that you can go claim now via the Perk gallery on your Xbox console, Windows PC, or the Xbox Game Pass mobile app for iOS/Android. 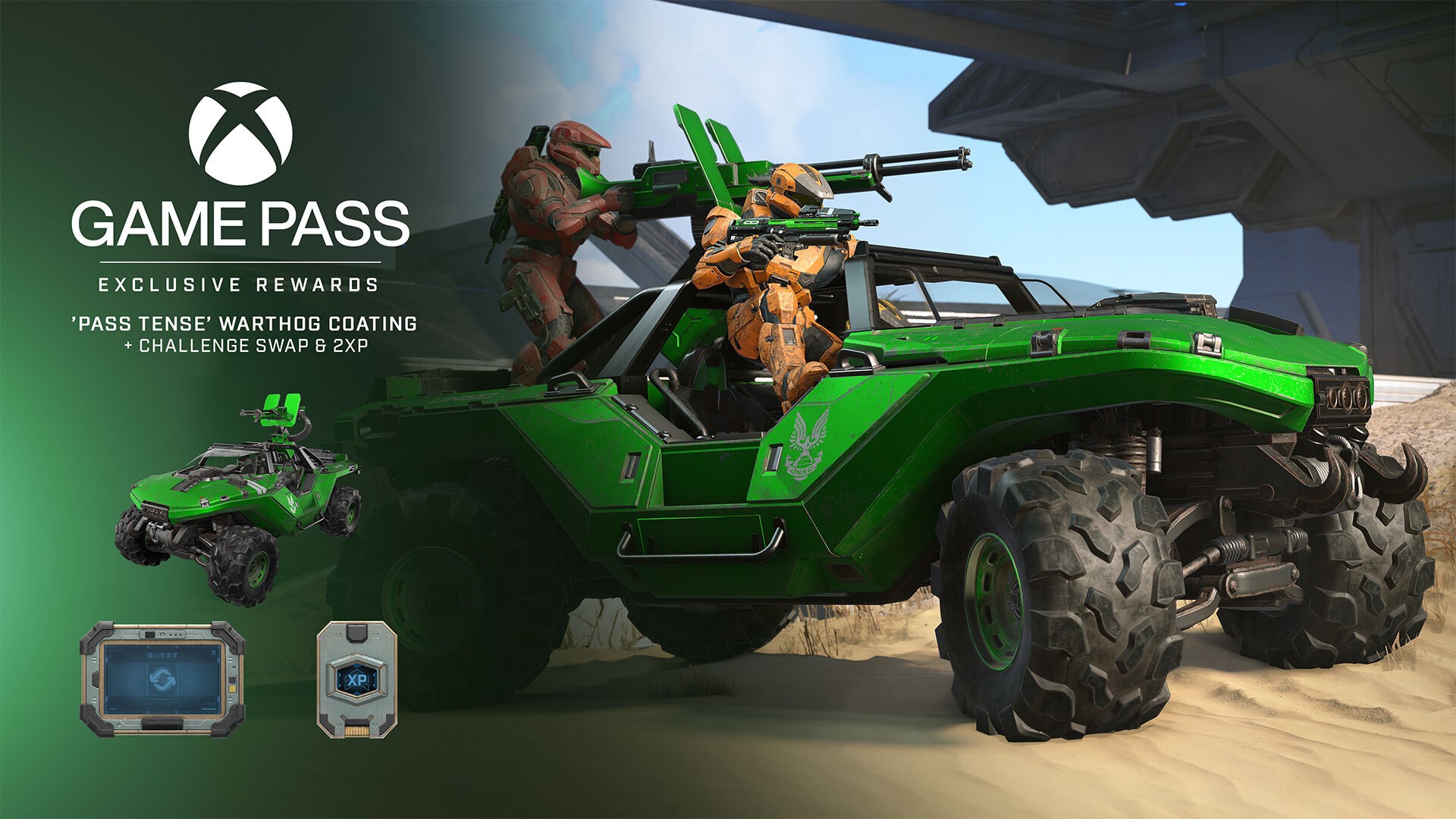 Doom Eternal: Raze Hell with Three Cosmetic Packs – Available now
Grab three cosmetic packs now and fight the hordes of Hell in style in Doom Eternal’s epic campaign and Battlemode, or show off your player and weapon skins in the campaign’s Photo Mode.

World of Tanks: Premium Trifecta Bundle – Available now
Dominate the battlefield with three premium powerhouse tanks, bristling with devastating weaponry! Seven days of Premium Time plus 850 Gold round out this bundle for the ultimate tanking experience. The following games will be leaving the Game Pass library soon, so don’t let these games leave without a proper send off! Remember to use your membership discount to save up to 20% on these games before they go!

That’s a wrap for January! I’ll be going into stasis for the next couple of days until Rainbow Six Extraction comes out, please wake me up when it’s time to fight some aliens. As always, be sure to follow us on @XboxGamePassPC and @XboxGamePass for updates when these games are available. Catch you next time!

A Jujutsu Kaisen crossover event will eventually show up...

Play as the Creature, a wanderer without memory...