From Mighty Kingdom and Funcom, Conan Chop Chop brings all the mayhem of the Conan universe in fully-fledged 2D splendor. This party roguelite is easy to pick up but features all the replayability fans have come to expect from the genre. Get out there, collect loot, die, start over, and conquer your foes in one of the best Conan the Barbarian games ever (definitely one of the top 20).

Hyboria is under threat. Thoth-Amon, like most villains, can’t chill for two seconds so he’s trying to pull some evil stuff. You and your friends must defeat all his evil minions so you can confront him and put a stop to his evil plans. Nevermind that it’s exactly what he wants you to do but knowing where the trap is — that’s the first step in evading it. Traverse a magically generated world that changes on every run, find the perfect combination of equipment and charm, and take down the evil Thoth-Amon once and for all. Or until we reveal he survived with plot armor next time we need him as an antagonist.

There might be a cleverer way to defeat your enemies – pen and the sword and all that – but in Chop Chop your best bet is to hit them with a weapon of some sort. Or shoot them with your bow. Journey through different lands with a friend, kill the enemies in your path and equip yourself with the most powerful weapons, armor and charms to defeat Thoth-Amon’s champions. You will die. But death is only part of the experience. Speaking of which, you can use the experience you gain to level up your character. Unlock the unique abilities and power-ups and get back to it.

If you’ve ever gone monster slaying, you know it’s better to take a friend or two. In Conan Chop Chop you can play as Conan, Bêlit, Valeria, or Pallantides in couch or online co-op. With up to 4 players, you can explore the differences between Conan’s luscious mane, Valeria’s golden locks, and Pallantides’ blue mohawk. Oh, and all the different characters feature distinct playing styles, abilities, and skill trees for you to unlock.

This game is so easy to pick up that you could even play it with your grandma. She’ll die all the time and you’ll have to hard carry her but dying is a part of roguelites and the true victory is the friends we made along the way. Choose the right combination of charms and equipment to make your character invincible. Use fire arrows and a fire sword for maximum burn damage or equip poison arrows and the vampric strike charm to drain life away from your enemies. Or you can equip the Bacon Buddy charm to arm you with a pet pig who can tank damage and is a good cure for loneliness.

But when you start a new run don’t get cocky if you got really far last time. The world changes every run. That extra heart you got before? That’s now a miniboss waiting to crush you. The super sweet poison charm you built your entire build around? Now you have Twin Bangs doubling your bombs when you drop one. With all these changes your best bet is to figure it out as you go along. Grab the best gear and improvise. Find out if you can finally conquer Thoth-Amon. We’ll see you out there!

Conan Chop Chop is out now and supports 1-4 player couch and online co-op. 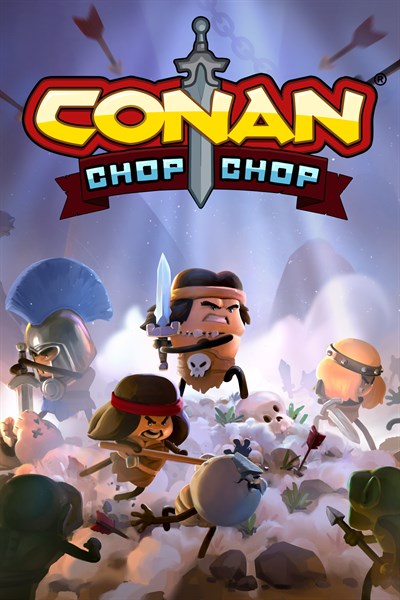 Enter the Wrath-a-Thon, a fiendish challenge created by the evil sorcerer Thoth-Amon to trap the heroes of Hyboria. Crush, kill and maim your enemies with an arsenal of savage weapons as you and your friends take on the minions of evil. Upgrade your village, upgrade your skills and upgrade yourself (seriously, this game will make you a better person). Conan Chop Chop is the most epic and realistic stick figure game ever to be set in the world of Conan the Barbarian. Discover a delightfully savage world full of epic boss fights, perilous dungeons, and endless amounts of loot and item combinations. ONLINE AND COUCH CO-OP While you can choose to save the world solo, Conan Chop Chop really puts the party in “party game” when you step into its multiplayer mayhem. Featuring 1-4 player online and couch co-op, you can choose to play by yourself, with friends, or random people as you save the world from damnation. UNIQUE CAST OF HEROES Want to get up close and personal, or shoot your opponents from afar? Choose from a cast consisting of the most famous heroes in Hyboria, from the sword-swinging Conan to the bow-bending Bêlit. Chop, shoot, or simply blast your foes into tiny bits. LEVEL UP YOUR CHARACTERS In Conan Chop Chop, what kills you also makes you stronger. Use the experience you earn from each run to unlock character-specific perks and abilities to conquer the enemies that defeated you. Build the skill tree for each one of the characters and discover their unique builds. TRILLIONS OF ITEM COMBOS Acquire new skills as you venture to the far reaches of the world, looting magical charms, weapons, and armors. Experiment with different item combinations to discover potentially overpowered abilities and new ways to play. MAGICALLY GENERATED WORLD No two runs through Conan Chop Chop are the same, thanks to procedurally generated maps and dungeon layouts. Discover new shops, challenges and treasures with every playthrough. RUTHLESS BOSS FIGHTS Test your might against unique dungeon bosses, such as The Giant Sand Worm of Koth and The Frost Giant of Vanaheim. Some bosses may even roam the wilderness, guarding golden chests, powerful artifacts, and other riches.