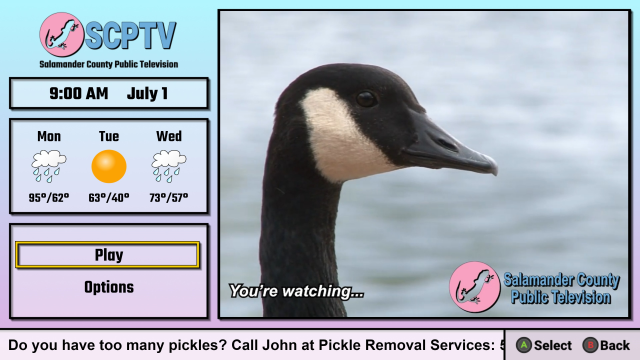 Public access TV isn’t something us Brits are typically familiar with. It gives an insight into the weirder side of humanity, away from rules and regulations of big TV corporations. Sometimes it can make little to no sense except to those actually making the TV show. It can also give us Salamander County Public Television, a game based on the lighter side of public access TV, out today on Xbox and PlayStation.

You are the newest employee at Salamander County Public Television. You are also only one of three people working there, alongside your boss and another employee. Everyone else at the station and the wider county have bizarrely disappeared. However, the need for TV is still there, but it is now down to you to create all the shows that SCPTV is famous for!

You could also at some point try and figure out why everyone has disappeared. But that can wait.

I’ve seen enough already to wager this will be appearing in our top Indie games of 2023. But will it be able to compete against any of our Best Indie Games from 2022?

If you like things a bit offbeat and unusual, and a story involving a mouse with big legs, then this looks like the game for you. Salamander County Public Television is on the Xbox Store now priced at £6.69 and looks unlike anything else out currently. Our review will have the details on how it actually plays coming very soon, so stay tuned!

A minigame-packed mystery-comedy set in a TV Station! Congrats on becoming the newest hire of Salamander County’s public TV station (SCPTV)! …Unfortunately, everyone in the county suddenly disappeared, except for you, your boss, and another employee. But the show must go on, so with your new job title of Professional Thing-Doer, it’s up to you to do all of the activities that need to be filmed for the TV station. (You should probably try and figure out why everyone disappeared in the first place, too.)

Image: NintendoIf you're a Splatoon 3 fanatic, you may make use of the NSO mobile app 'SplatNet' on...
News

In this week's episode of The Game Informer Show, our new Associate Editor Charles Harte joins the crew to talk...

In this week's episode of The Game Informer Show, our new...

Update: A conflicting report from CNBC suggests that the...

Update: Sadly, it's likely the "unacceptable content" this update...

A WAY OUT Walkthrough Part 1 and until the...