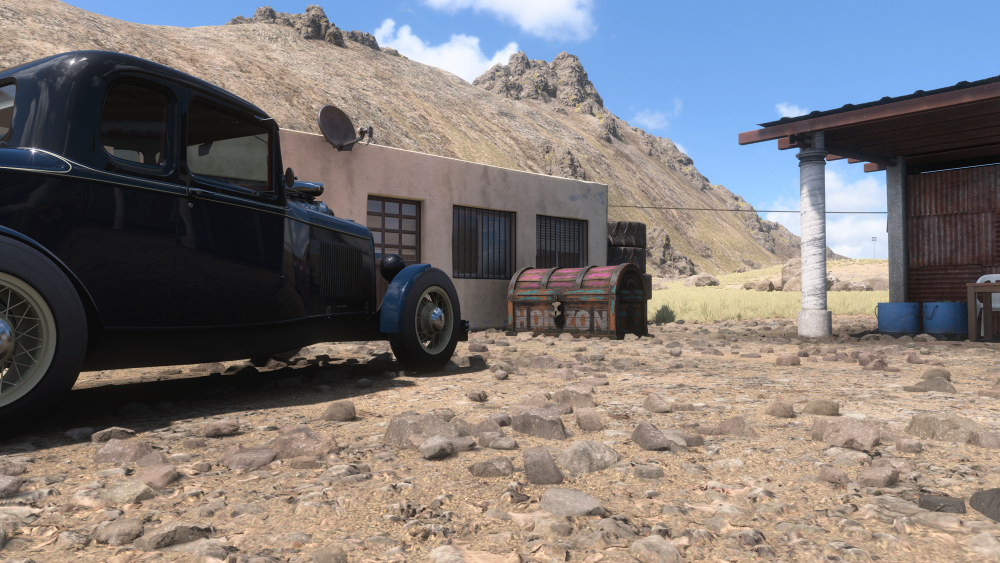 Well, here it is, the eleventh offering in the Forza Horizon 5 Festival Playlist Weekly Challenges, and it is shaping up to be a good one. Entitled “Rami’s Racing History”, not only does it come with a whole new story to complete, but also new cars and events as well. So, without further ado, let’s dive in and see what’s happening in winter in Mexico with Series 11 – Summer, shall we?

This week, the weekly ‘drive a car around Mexico’ challenge features one of the most beautiful cars ever designed, as said by no less a person than Enzo Ferrari himself. Yes, the subject this week is the Jaguar E-Type from 1961.

It can be bought from the Autoshow for a mere 150,000 Credits, or it can be won for free by winning the Eventlab event this week.

Get in your E-Type and take her for a spin. Job done.

Next we have to use the Jag’s famous pace (this was a car that could crack 150mph when it was released) in order to win a road race.

More racing here, as we have to earn ten Clean Racing skills to emulate the “Grace, space and pace” of the Jaguar. Sounds like nonsense to me, but pick a race and give it a whirl. Just keep it clean.

Finally, we have to use the Jag’s great speed to win nine stars at Speed Zones. Pick your favourite and let rip.

Once you have the nine stars, that’s job done!

A new week, a new season, and a new bunch of things to do .From the sublime (the Trial) to the ridiculous (more Eventlab nonsense) this week we are spoiled for choice.

So, let’s jump straight in and see what we can do.

The Trial this week is easy for me, as no tuning is required at all.

We merely have to turn up to the start line, with the finest racers gathered from the darkest reaches of the interweb, in a stock Mini Cooper S from 1965. Blimey, this thing is slow.

Running the gauntlet successfully will get us a nice #24 Ferrari P4, so worth the effort.

In keeping with the racing history theme, here we have to use a car of ancient times, before 1970, and with a maximum of B Class 700.

I like to go by the old saying “There ain’t no replacement for displacement” in situations like this, and used a Chevrolet Super Sport Coupe from 1969. The share code is : 144142144.

With no competition and a reasonably fun track, this week is one of the better offerings.

Winning this event will get us the Jaguar E-Type we need to use for the weekly challenge, so if you don’t have one in your garage, make this your first stop, eh?

Well, I took the same E-Type I used earlier and let it rip. Hitting the sign at 105 mph saw me jump way past the target.

Success in this endeavour will net you a Super Wheelspin.

I used the same Jaguar E-Type as in the Danger Sign previously to complete this.

The water splash in the middle is a bit of a killer, but approaching from the south made it slightly easier, as did hitting the start as fast as possible.

You will get a Chevy 150 Sedan for your trouble, a new car to the game. Keep trying.

For this championship we are a little restricted to the car we can use, being a Classic Muscle car from the 1960s, to a maximum class of C Class 600.

As so often in this game, the answer to the question is a Mustang, this time the GT Coupe from 1965.

Winning the championship will get you a nice Chevy Impala.

We are restricted to one car for this series of races, the mighty VW Class 5 Bug, tuned to the top of D Class, 500

Your prize for winning overall, or best two out of three in a convoy, is a Mustang from 1969.

Seasonal Championship – Back to the Streets

Now here is some really historic racing for you. Any car, as long as it was made before 1960.  And as long as it is B Class with a 700 maximum, of course.

Now, it’s here that I noticed an issue – why isn’t year of manufacture one of the search criteria in the garage?

Ah well. I went with an Austin Healey Sprite, share code 630828437. It’s light and nimble, so while it is a challenge to win, it is very doable.

A photo taking opportunity and a treasure hunt – what more could anyone want? Maybe some hot Horizon Open action? Okay then.

Take a little Morris Minor way out of its comfort zone, into the jungle around Ek’Balam, and take a photo of the poor beastie. It’s rough in the jungle.

I’ll share the location and my artistic efforts below, as per usual.

You too could have a duck quack horn, should you go off the beaten track.

Treasure Hunt – Give Me Five

The clue this week reads “Take 5 for a luxury road experience like its 1932”.

The only car that fits the bill is the Ford De Luxe 5 Window Coupe, from 1932, so I’m guessing this is the car we need to use. Then it is simply a case of earning 5 stars from any PR Stunt.

I used a speed zone and just went back and forth until it was done.

I’ll include the location below.

As it could be any class you fancy, I can’t recommend you a tune, but any car should be able to fly. I believe they can, anyway…

The Hot Wheels events are front and centre again this week, with a couple of challenges to partake in. You may need to be Elite level in the DLC in order to take them in.

Another run through a speed trap, and it is again limited to older cars.

Approach from the north and use the speed boost from the loop to your advantage, is my advice.

A super Wheelspin will be yours for completing this feat.

This championship requires us to use a Classic Racer, tuned up to a maximum of S1 Class 900.

Following the usual traits of winning the championship solo, or best two out of three racers in a convoy, will see you take away a nice shiny Pontiac GTO as a prize.

As this is the start of a new Series, there are a few Monthly Events to enjoy as well. We’ve got the standard Monthly Rivals clean lap challenge, this time around the Bahia de Plano circuit (take it easy, don’t crash and the job will be a good un), as well as the EV equivalent in the Forza EV Los Jardines Circuit. Both of these will provide you with 4pts towards your car rewards.

Further is the next chapter in the Horizon Story – Made in Mexico. 12pts are on offer should you be able to complete it, with up to 27 stars needed to be obtained. As we all know, the Horizon Stories can be challenging, and with nine steps to complete in Rami’s, I can see that this is going to be interesting. The first stage is to take the homegrown sports car, the Buhl 05 RR, out for a spin, and as it is Rami, we need to keep it above 80mph on the way to the destination – something which is easier said than done given that the car seems to have tyres made of teflon. Want to know what’s next? Well, dive in and play – you won’t get any spoilers here!

As is standard, Series 11 and the Festival Playlist Challenges offer up cars in rewards for your efforts. The Series 11 – Summer cars are those of the Porsche 550 for 20pts and the Maserati 8CTF for 40pts. The full Series gives out the BMW M4 ‘21 for 80pts and the M-B 300 SLR for 160pts. You’ll need to complete further seasons in order to grab those.

And that’s a bit of luck as we’ll be back to give you the fastest cars and tunes needed for completion of Autumn, Winter and Spring of Series 11 as the weeks progress.

Remember, all you need to be able to take part in these challenges is a copy of Forza Horizon 5. It is playable on Xbox One, Xbox Series X|S or PC via the Xbox Store. It’s on Game Pass too whilst the Hot Wheels expansion sits behind a cash outlay.

Let us know if you liked this guide. Or not. We won’t be offended.

Welcome to another episode of The Pure Nintendo Podcast! This week Jemma and Roger discuss everything to do...
News

Marvel's Midnight Suns has been delayed a second time, and while it doesn't seem to be a long...
XBox

Well, here it is, the eleventh offering in the Forza Horizon 5 Festival Playlist Weekly Challenges, and it...
Trailers

Does this remake of the 1992 sci-fi platformer honor the past or tarnish its memory? Find out in...

A Plague Tale Innocence Walkthrough Part 1 and until...

All the Wordle tips, hints, clues, and more you...

Aiden Pearce seeks revenge against a city that turned...

Marvel's Midnight Suns has been delayed a second time,...

The Lightbearer DLC is available now for We Happy...

Daedalic Entertainment and Nacon have announced The Lord of...