Bulgaria is home to 230 thousand cows and around 6.9 million humans, which means roughly every 30 people get a cow. The cow that’s been living at The Sixth Hammer studios has been demanding a game since the co-creators first discovered what a cow actually is. Well, we are very pleased to announce that Moo Lander is out and available for Xbox One, now!

Moo Lander is all about the milk! Embark on an epic quest to save your dying civilization – tame Mighty Cow bosses, uncover ancient secrets and fight hordes of enemies with a powerful milk arsenal. Enjoy a four-player local multiplayer with four different gameplay modes.

The Secret Cow Level Now Has Its Own Secret Human Level

In the mooltiverse of Moo Lander, milk reigns as the supreme energy source, possessing a power second only to the stellar explosions of a super nova. Trouble is, it’s rapidly becoming scarce. The steaks – er, stakes – for your civilization are high, but rumors of an ancient device capable of producing infinite quantities of milk have reached your ears. After hoofing it to the only functioning spacecraft your civilization has left, you set out to a gorgeous, handcrafted world full of deadly life-forms and ancient bovine foes.

When Cows Fight Back against Alien Invasion

As you progress through the game, over 15 different types of Mighty Cows will stand in your way. From the darkest dungeon to the highest peak, these powerful bosses are everywhere and will threaten your important mission. We have developed an advanced Cow AI and you will need to master your skills in order to match the cows’ superior intellect! Every single bovine boss is cinematically crafted and has its unique attacks, abilities and strategies. A cosmic challenge awaits every gamer who chooses to be the Hero of The Landers!

We Will Never Look at a Milkshake the Same Way

Each Mighty Cow has a unique Cow AI that governs their behavior and demands a carefully considered approach. Milk sabers, dairy beams, and more are at your disposal, but you dare not harm the Ancient Mighty Cows. These reverential beasts must be overcome with non-lethal methods and careful use of the environment.

Almost all of The Landers’ tech is powered by milk! You have to choose your weapons and play style – will you utilize The Milk Saber and The Milk Shield like a melee-oriented milky knight, or will you snipe from afar with The Milk machinegun? Or you can be a milk ninja and use The Mooriken.

Moo Lander’s gameplay elements include classic action RPG features, mixed with clever puzzle solving and metrodivania-style activities! Here are some of them:

Yes, you are reading it right – Moo Lander has an awesome local mooltiplayer, and it gives you the option to play as The Cows! How cool is that? The game presents several special arena maps and four multiplayer modes – PvP, PvE, Galactic Mooball and Survive the Waves. Gather some friends to go up against the AI cows, or gear up and do a two Landers vs two Cows, all controlled by the players. Or if you are a soccer fan, you can team up with a buddy to go up against two other players in our Galactic Mooball mode (you can even play as a Mighty Cow). Moo Lander couch co-op mooltiplayer offers tons of fun with family and friends, all together in front of the TV.

Moo Lander’s story explores the adventures of the last Hero of the Landers and his trusty AI – Hamilton! Experience shocking revelations and discover the secrets of the Mighty Cows, explore the beautiful environments of the game – all handcrafted with passion and devotion, and listen to amazing music along the way. With branching dialog choices and optional action paths, you are in control of the fate of an entire civilization! You can be a part of this adventure right now on Xbox One/Series! 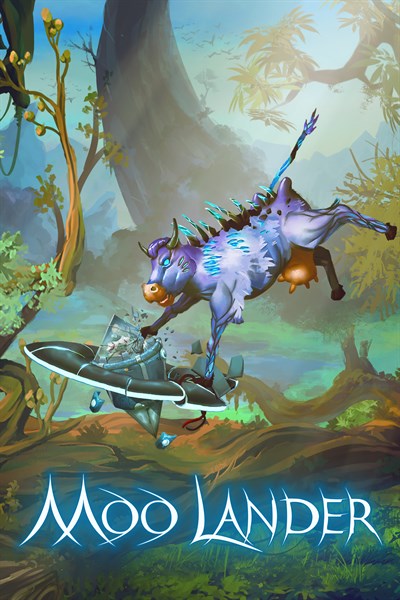 Moo Lander is all about the milk! Embark on an epic quest to save your dying civilization – tame Mighty Cow bosses, uncover ancient secrets and fight hordes of enemies with a powerful milk arsenal. Enjoy a 4-player local multiplayer with 4 different gameplay modes. — STORY — Milk – the purest energy source, rivaled by the brightest hypernovas, has been lost after The War! Your mission is to recover the ancient device capable of producing infinite amounts of it. Can you get to the device in time? The fate of the Landers is in your hands! — TAME THE MIGHTY COWS — These powerful bosses will threaten your mission. You will need to master your skills against the advanced Cow AI in order to match their superior intellect! — FIGHT CHALLENGING ENEMIES — Vastly different types of enemies are waiting for you! Their mission – to prevent you from achieving yours. Each one of them requires a unique approach in order to be defeated. — UPGRADE YOUR SHIP — Level up your ship and unlock an arsenal of milk weaponry and defenses to shape your specific playstyle. Research camouflage modules to gain tactical advantage in combat. — ENGAGING SINGLE-PLAYER CAMPAIGN — Play the emotional, 12+ hours long campaign full of memorable characters and plot twists. — UNIQUE ENVIRONMENT — Discover beautiful, yet lethal hand-crafted landscapes. From the highest peak to the deepest dungeon – each provides its own unique challenges, enemies and puzzles. — BE THE COW — Take control of the Mighty Cows and go up against the heroes of the story. Try and protect your Milk from the Landers! — COUCH CO-OP — Experience the game with up to 4 of your friends in various addictive couch co-op and multiplayer modes! — 4 MODES — Fighting with your friends against our powerful Cow AI, having brutal PvP combats, playing Galactic Mooball or teaming against waves of enemies – there is a lot to explore in the alien world of Moo Lander.

Some larger-than-life video game concepts actually exist in our real world. Here are some of our favorite examples. Subscribe...
PC

As reported by New Scientist (opens in new tab), a team at Cambridge University, the Howe Lab (opens...
Nintendo

Lila’s Sky Ark is a puzzle-adventure game for the Nintendo Switch. If you like your gaming a little...
News

Epic Games has announced that Coachella 2022 is coming to Fortnite.  This news comes by way of...

Note: Xur has moved! Check out Xur's location for...

A trailer for a dark co-op RPG adventure game...

Learn the basics of the future sports game. Watch more...

Cybernetic, Ninja Warfare like you've never seen it before...