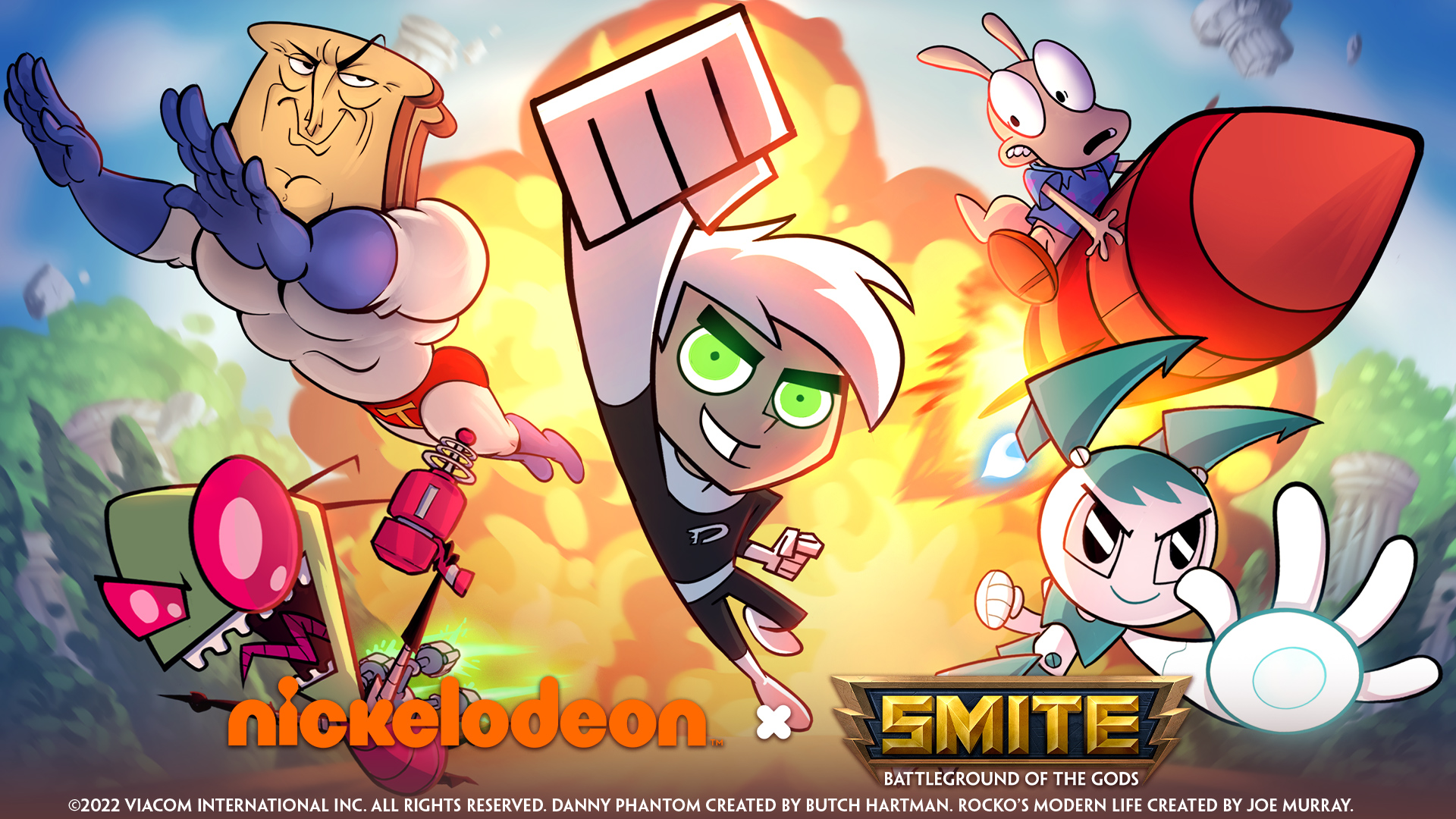 Go Ghost with Danny Phantom… in Smite? Danny Phantom, Invader Zim, and other iconic Nickelodeon characters battle gods in the all-new Nickelodeon x Smite Crossover Event featuring characters from “Invader Zim”, “Rocko’s Modern Life”, “My Life As A Teenage Robot”, “Danny Phantom”, and “Ren and Stimpy”! After the success of Smite’s previous Nickelodeon crossovers, “Avatar: The Last Airbender”, and “Teenage Mutant Ninja Turtles”, we’re going all out this time to bring your favorite characters from across Nickelodeon’s roster. So come along and claim clean, lemony fresh victory in this crossover event.

Over the course of the event, we’ll be adding some fantastic skins from some of your favorite Nickelodeon shows including: Invader Zim Cupid, Rocko Danzaburou, XJ9 Freya, and Powdered Toastman Gilgamesh. Purchase all these skins and unlock the final skin, Danny Phantom Janus, for free! Complete Nickelodeon event quests to earn free Nickelodeon cosmetics, such as character announcer packs, loading screens, and avatars. Whether you’re a new player or a returning Smite veteran, it’s a fantastic time to get some of that nostalgia kicking for your favorite childhood characters.

Don’t hop off this wild ride yet, though. We are super excited to be introducing a brand-new item tree for the first time since 2019! This new “Earring” tree is meant to give you a fundamentally different experience in Smite. We’re breaking some long-established game rules, like with Griffonwing Earrings, which increases the projectile speed of your basic attacks. With Sphinx’s Bauble, you can even go above the Cooldown Reduction cap.

That’s not all we’ve got for you. We’re also going to be introducing brand new Glyphs, and I’ll let one of the designers, Ryan Bailey, talk us through them.

“With our first round of Glyphs, some god archetypes lacked a synergistic option or they had a Glyph passive they wanted but weren’t as interested in the base item,” Bailey said. “For example, Bancroft’s Talon will be receiving a brand-new Glyph – Bancroft’s Claw, which is aimed at battle mages that love to be in the middle of the fight, like Zhong Kui or Hades. Be on the lookout for the 6 brand new Glyphs to the game, as well as the relocation of 2 existing Glyph passives onto different Tier 3 items.”

“The way that Masks felt before caused too sharp of a change in moment-to-moment gameplay,” Bailey said. “You could completely shift how tanky or damaging you felt with one purchase. We wanted to smooth out that curve, and we think the players that want these effects want their game to feel different from the outset. They’ll still be class locked in the same way, but they will make your god scale as if they were the typical damage or tank class.”

In addition to all of these updates, we’re also unveiling a new system that allows us to balance Non-Conquest game modes separately from Conquest.

This Smite update is brimming with brand new content, including Smite’s newest battle pass: the Zodiac Council Battle Pass. The best part of this battle pass is levels can be purchased for FREE with earnable in-game currency. Inspired by the very stars above, the Zodiac Council Battle Pass features dazzling skins for Nemesis, Heimdallr, Eset, and Charybdis. Find your enemies unworthy as The Scales Nemesis and unleash the pride of the Heavens as The Lion Heimdallr, or harness the fury of a thousand suns as The Maiden Eset. Progressing through the entire Battle Pass will reward you with the incredible Tier 4 Skin – The Crab Charybdis, perfect for the Zodiac Element of Water.

For more details about the all-new Nickelodeon x Smite Crossover Event and the latest Smite update, check out the official Smite website and follow us on Twitter @SMITEGame. 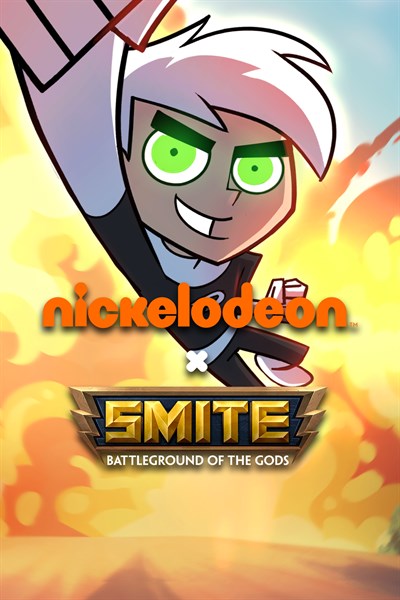 Enter the Battleground of the Gods Join 35+ million players in SMITE, the world’s most popular action multiplayer online battle arena. Become a legend of myth, enter the Battleground of the Gods, and play FREE now! 100+ Gods Unleash each deity’s unique strategies, legendary weapons, and earth-shattering powers. Rain lightning down upon your foes as Zeus, assassinate from the shadows as Loki, or transform and trick your foes as the Monkey King, Sun Wukong. Which God will you choose? Unique Perspective Unlike other MOBAs, SMITE puts you directly onto the battlefield with a third-person action viewpoint. From blind-side ambushes to aimed shots, a new pantheon of strategic possibilities awaits. Become Godlike Never played a battle arena before? Don’t worry. Auto-buy, auto-level, and the deathmatch-like Arena mode let you jump right into divine MOBA action. Aspiring pro? Top the ladders, join a competitive team, and you too could be playing at the SMITE World Championship. © 2012 – 2021 Hi-Rez Studios, Inc. “SMITE”, “Battleground of the Gods”, “Titan Forge Games”, and “Hi-Rez Studios” are trademarks or registered trademarks of Hi-Rez Studios, Inc. in the U.S. and/or other countries. All trademarks and copyright material are property of their respective owners. All rights reserved. TRANSFORMERS and all related characters are trademarks of Hasbro and are used with permission. © 2021 Hasbro. All Rights Reserved. Licensed by Hasbro.

This is a complete instructional walkthrough of the Ghostbusters 2016 Story Pack from year 2 of LEGO Dimensions,...
PC

The death of Minecraft YouTuber Technoblade (opens in new tab) last week after a year-long struggle with cancer...
Nintendo

Subscribe to Nintendo Life on YouTube We can't decide if this Backstreet Boys-meets-Ace Attorney combination is brilliant, or...
News

Video game delays have become commonplace during the pandemic — we tallied 60 delays in 2021 alone —...

Reap what you sow during Free...

Pimax has increased the refresh rate of its Pimax...

Time on Frog Island at first seems like a...

This video is an instructional 100% full game walkthrough...

Horizon Forbidden West Price on PS5 and PS4 Could Lead

Sony could be in trouble, as prices for Horizon Forbidden...

The latest sales data from Japan has been released,...

Put your pitchforks down, because Sony has been reasonably...

Cat Cafe Manager is a store simulator in which...