Kickstarted in March 2019 and launched in early access in November 2020, Prodeus channels the spirit of first-person shooters of old — think shotguns, blue keycards, deathmatch arenas, and legendary LAN parties — and infuses it with a jolt of modern technology.

That means an aesthetic mix of high-quality 3D art and retro rendering techniques, and plenty of over-the-top visual effects. Explosions of lo-fi pixels and hi-tech particle effects fill the screen as you clash against the Prodeans and forces of Chaos, and buckets of blood and gore paint the walls red courtesy of a delightfully demented dismemberment system.

Prodeus features a hand-crafted campaign from industry FPS veterans, along with multiplayer drawing on classic modes. You can take on the campaign solo or in 4-player co-op, and dive into the fray in 16-player Deathmatch, Team Deathmatch, CTF, and more.

PC players can take things to the next level by making their own maps using the game’s easy-to-use editor — then upload them to be discovered in the community map browser, where both PC and Xbox players can find some new fragging grounds. (There are already some sick levels out there, too, since people have been forging maps since prior to today’s v1.0 release.)

And of course, as with any good Boomer Shooter with abominable monsters from unspeakable places, the game also features an appropriately metal soundtrack — this one from retro FPS composer Andrew Hulshult — that dynamically changes gears to accompany your shotgun blasts and rocket fire.

Check out the Prodeus page on the Humble Games website for all the gory details — or just grab your shotgun, crank up the volume, and spatter the steel walls and alien halls in Prodeus today! 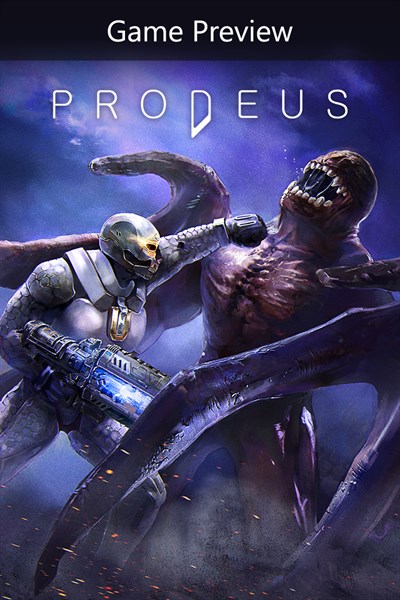 Prodeus is a first-person shooter of old, re-imagined using modern rendering techniques and technology. Experience the quality you’d expect from a modern AAA game, designed with retro aesthetics and gameplay that invoke the tech-imposed limits of older hardware. The game features a hand-crafted campaign from industry FPS veterans, co-op and competitive multiplayer play drawing on classic modes*, a fully integrated level editor, and a built-in community map browser for instantaneous action with nearly limitless levels to play. Get ready to paint the walls red. This is the Boomer Shooter you’ve been waiting for. FEATURES: Retro look, modern era Shooters past and present collide with graphics that combine today’s high-quality 3D tech with retro visuals. Experience over-the-top explosions of lo-fi pixels and hi-tech particle effects as you clash against the Prodeans and forces of Chaos. Pure retro FPS chaos Steel yourself for fast and frantic nonstop action. Blast and blaze your way through hordes of chaos-spawned creatures using an arsenal of classically over-the-top weapons. Raining red Splatter the steel walls and alien halls with the blood of your enemies. Experience the gory thrills of the elder shooters, dialed up to 11 thanks to Prodeus’s delightfully demented dismemberment system. Community-crafted levels Discover new arenas through a built-in browser filled with community-created maps, and keep the visceral combat fresh. Multiplayer Mayhem Team up and go head-to-head in a variety of multiplayer modes. Take on the campaign in 4-player co-op, and dive into the fray in 16-player Deathmatch, Team Deathmatch, CTF, and more—then take things to the next level by creating and sharing custom game modes. Frag to the Music Burst blood vessels listening to a supercharged metal soundtrack by retro FPS composer Andrew Hulshult that dynamically changes gears to accompany your actions.

Testing videogames is a challenging job, and it's only becoming more challenging as games get bigger and more...
Nintendo

There's plenty of action RPG for fans of the genre, but Steelrising hopes to rise above the usual...
XBox

SummaryProdeus 1.0 arrives today on Xbox One, Xbox Series X|S, Windows 10/11, and with Xbox Game Pass and...

Our fans asked us to rank our favorite games...

This year may have some big shoes to fill,...

There’s something just so mesmerising about...

Rumors of the existence of a new game...

Some video game secrets go undiscovered for years and...

Naughty By Nature – Naughty Dog Leadership Reflects On The

It's Christmas time in Gotham City! Check out our...

Minecraft Live Votes for Mobs, Upcoming Releases and Much More